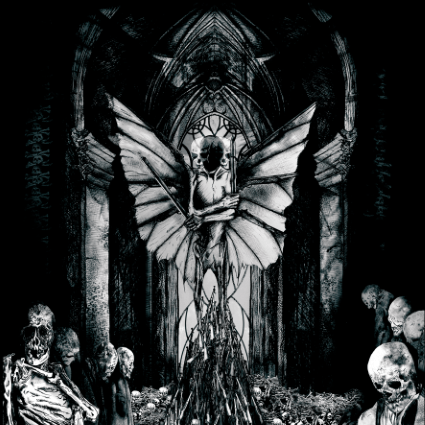 I see photos of New Zealand showing beautiful mountains and valleys, pristine beaches and sapphire waters, and I’m pretty convinced they’re all photoshopped. How could a place which looks like that produce the kind of music on display in the new split LP by the NZ bands Vassafor and Sinistrous Diabolus? Surely the true face of the land resembles Mordor under the grip of Sauron. And all the sheep have been dismembered and consumed, raw.

Vassafor’s side of the split consists of two long tracks, an original song named “Ossuary in Darkness” and a cover of “Son of the Moon” by the Greek black metal band Varathon. Sinistrous Diabolus dominates their entire side with a 21-minute monster named “Aeon Tenebris – Aeo Lacrimis”. Each side features separate cover art.

I first came upon Vassafor in 2012 after release of their debut album, Obsidian Codex (reviewing two tracks from the album here), and have been following them ever since, though their history reaches much further back in time. Apart from a live in-studio recording that became available about a year ago (discussed here), their songs on the split represent their first new work since that debut full-length.

Vassafor occupy the 15 minutes of “Ossuary in Darkness” with a study in contrasts, moving back and forth after a grim overture between passages of oppressive doom-driven dirge and segments of racing, ravaging assault with claws and fangs fully exposed. The slower moments are sometimes drenched in a fog of poisonous riffs, sometimes accented by the groaning of ominous chords and funereal notes, sometimes laced with minor-key, hornet-swarm tremolo melodies. They sound like hymns to the denial of life.

When the band accelerate, the dangers lurking within the music become more perilous and harrowing, the guitars emanating a writhing, shrieking atmosphere of menace and infernal hunger. But both in these passages and in the slow ones, melancholy melodies surface that lift (ever so slightly) the pall of desolation. One thing that never changes, however, is the vicious, distorted bestiality of Vassafor’s vocalist or the dense, mutilated sound of the production.

Vassafor’s take on “Son of the Moon” (which first appeared on Varathon’s 1993 album His Majesty at the Swamp) makes the song sound even more evil, threatening, and oppressive than the Hellenic original. It’s a largely mid-paced work, threaded with dreary, memorable riffs, hammering chords and Eastern-sounding dual guitar harmonies, moaning ambience and heavy thunder. More head-nodding than “Ossuary”, it’s nevertheless still blanketed in an atmosphere of doom and desolation.

Vassafor have long since made a notable name for themselves in that lethal landscape where black and death metal meet to engage in ritual slaughter, but their offerings on this split should elevate their regard even further. 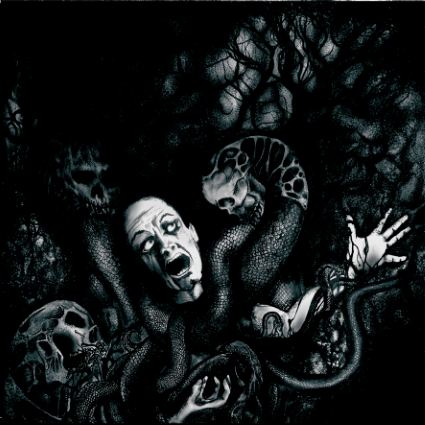 It seems that this band’s ancient name is one with which a host of blackened death/doom bands in New Zealand’s zone of influence have conjured for roughly 20 years, on the strength of a 1993 cassette entitled Opus One. Their debut album finally arrived last year under the apt title of Total Doom//Desecration, which delivered 40 minutes of murky, monolithically oppressive atmosphere filled with the motion of palpably horrifying specters of malevolence.

“Aeon Tenebris – Aeo Lacrimis” is similarly devoted — and even more so, given its length — to the creation of an all-enveloping sensory experience. It has a cinematic, big-screen, panoramic quality, conjuring vast lightless dimensions in which voracious leviathans and undead spirits roam. Or perhaps it’s better thought of as a symphony of damnation.

For most of its length, the music is glacially slow, with firm handholds on the crags of funeral doom. The riffs (and there aren’t many) come down with cataclysmic force, and the drum strikes sound like spine-rupturing timpani. Huge grinding noises fill the cavernous depths of the music, and eerie shimmering sounds emerge, like the voices of wraiths or like alien life-forms singing their chilling language from the void.

The music ebbs and flows, beginning with bereft, echoing guitar notes and then gradually building the tension and the fear, until storm fronts of harrowing noise erupt, fall away, and re-emerge. Periodically, those slow brutal drum beats accelerate into pulse-quickening gallops and militaristic assaults as passages of boiling heat appear within the refrigerated gloom. Exotic melodies come and go, some of them quite beautiful in a stricken sort of way; near the end, you may even hear what sounds like an ancient horn ringing a mournful hymn over a geography of blasted desolation.

And through it all, through the soft and the loud, horrific wordless voices howl in agony or roar in anger, the sounds reverberating as if welling up from a smoking pit of agony and despair.

In the hands of someone less masterful than N.K.S., someone who might lean on the crutch of droning repetition, a work of this length would risk losing its listeners. Their minds might wander, their hands begin to fidget. But this song is deep and enthralling, with an almost hypnotic appeal despite its movement through multiple layers of sound and imagination.

The Vassafor / Sinistrous Diabolus split will be released on vinyl by Iron Bonehead Productions. But as of yesterday it became available for download on Bandcamp: