Although we often don’t bother with some of the “big” releases here at NCS (mainly because these artists will be getting more than enough coverage and promotion as it is), there are certain albums like Magma that it’s just impossible for us to ignore.

As you will probably have gathered by now, this album presents a very different side of the band than you might be used to. Oh, they’ve always had their proggy and more melodic inclinations, but they’ve never before expressed them as boldly and prominently as they do on their sixth album.

Make no mistake about it, this is the French foursome’s own Crack The Skye moment, a full-on embracing and shameless expression of their progressive proclivities which also just happens to be their most streamlined, emotional, and, yes, accessible album yet.

You needn’t fear that the band have gone soft on you, of course, or “sold out” (though I can already hear those cries of consternation emanating from certain corners of the Metal world), as there are still multiple moments of the quartet’s signature biomechanical bombardment to be found across the length and breadth of the album’s ten tracks.

However, Magma is definitely a step outside of the band’s established comfort zone (which was in danger of becoming a rut at times on L’Enfant Sauvage) and sees them plying some unfamiliar, though ultimately very rewarding, waters.

Now, as it happens I’ve already reviewed Magma once for a different publication (though it has yet to be published) and so, to keep it interesting for myself, I’ve decided to forego the usual format, and instead provide a track-by-track breakdown of what you can expect over the course of the album’s forty-something minutes.

The album kicks off with something very different, as “The Shooting Star” is a much more pensive and atmospheric track than you’d expect… and packed full of some frankly gorgeous and emotive clean-sung vocal melodies to boot!

That said, there’s still a patient power to the restrained, tightly wound guitar work, and despite the more fluid and languid structure/pacing of the track you can still pick out that it’s Mario Duplantier enthroned behind the kit, adding his dashing flair to even the simplest drum beats.

Slow-burning, melancholy, and hypnotic, it’s quickly become one of my favourite songs the band have ever written!

As a heavier number than its predecessor, this is definitely closer to the Gojira we all used to know, albeit with some subtle (and some not-so-subtle) differences. In particular the sleek riffage and nimble lead patterns are reminiscent of a certain dark-hued Metallica album… although Joe Duplantier’s instantly recognisable vocals remain as potent and powerful as ever.

It’s surprising to note that the song not only has a well-defined chorus refrain but also what’s essentially a mid-section “solo” break, which emphasise the track’s unexpected adherence to the traditional verse-chorus-bridge format. Still a mighty fine song, though, when push comes to shove.

One of the album’s lesser tracks (at least in my estimation… and that’s still only a relative term), “The Cell” doesn’t really grab me as much as either of the previous two numbers, and does feel a little too much like a more simplified and mainstreamed version of the band’s established sound. It’s not terrible by any means, and I’m sure it will find its fans, but it’s one of the more forgettable tunes on the disc in my eyes.

The “love it or hate it” first single… which I actually love, as a matter of fact. Again, it’s Gojira’s version of “pulling a Mastodon”, as it’s a catchy-as-hell, commercially viable single that doesn’t betray the essence of the band, and those signature whammy hooks, chunky, chundering riffs, and Joe’s gruff, whale-song bellow are just designed to lodge themselves in your head forever.

Plus, for all its obvious cross-over appeal, it doesn’t sound forced or dishonest in the slightest, and gets my head nodding every time I hear it.

Really more of an interlude than a proper song, this provides a rare showcase for bassist Jean-Michel Labadie to get his moody, Cliff Burton groove on, and while I’m not usually a fan of these sorts of interlude-pieces, this one does have a certain charm (even if it feels a tad short and underdeveloped in the final assessment). 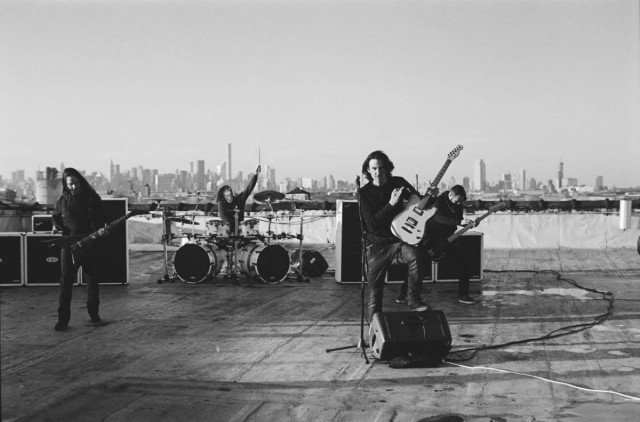 Much like “The Shooting Star”, the title-track sees the band bringing their Prog to bear, though this time in an even heavier manner, with the eerie, unusual verse parts and soaring, atmosphere-heavy chorus absolutely laden with prominent Pink Floydian touches. The drumming is, as always, utterly stellar, even if it is relatively restrained by the usual Duplantier standards, and little additions – such as the catchy-as-hell riff that crowns the song’s short bridge or the flickering lead guitar licks at its denouement – all just add to the track’s impressive character.

Crushing both sonically and emotionally, the cruncherous, chugtacular “Pray” is another killer cut, which matches elements of moody, meditative Post-Metal atmosphere to some utterly hammering moments of pseudo-Death Metal intensity. Expect this one to be a big hit with the older fans, despite never really replaying any of the band’s old tricks.

This one keeps the heaviness and energy levels high, with some pneumatic chug-kick interplay and a thick, pulsing low-end providing the background for Joe’s signature howl in a much more “traditional” fashion, and will probably also please their fans who’ve been struggling for something familiar to grab onto. It loses me a little in the back end, however, and doesn’t finish quite as strongly as it started.

The band go back to a more sombre, prog-focussed sound on this one, with a series of oddly haunting clean vocal melodies winding and weaving their way over a shivering sequence of subtle, rippling drums and atmospheric guitar work, eventually culminating in a final minute which bursts into sudden, convulsing life like the last gasps of a dying man. It’s not a particularly immediate track, but it’s another one of the album’s best in my opinion.

The album ends, oddly enough, with the contemplative instrumental strains of “Liberation”, my feelings for which are somewhat conflicting. On the one hand there’s clearly a lot of emotion poured into the track, despite its relative simplicity, while on the other it’s also a little fleeting and insubstantial in nature. Who knows, maybe it will grow on me.

For now though I prefer to think of the final minute of “Low Lands” as the album’s true finale, with “Liberation” serving instead as its epilogue.

So there we go. Hopefully that will help prepare some of you for what you’ll soon be hearing. Maybe it will have convinced some of you who had written the album off after reading THAT Rolling Stone article a few weeks ago to give Magma a fair shot (though it’s clear that a lot of what they said/predicted in that piece has actually come true). Or maybe I’ve just given you more reasons to hate/ignore it.

Either way, this feels, to me, like the sort of step Gojira really needed to take in order to avoid the threat of diminishing returns, as it definitely finds them pushing beyond their normal boundaries and expanding their sonic and emotional palette in the process. Indeed, you can really hear and feel the Duplantier brothers processing their grief, in all its pain and complexity, as you work through these tracks.

It certainly won’t be for everyone, and for every two new fans they make they’ll doubtless lose an old one in turn, but don’t even think of trying to use the term “sell-out”. It just doesn’t apply here.

Magma will be released by Roadrunner Records on June 17.