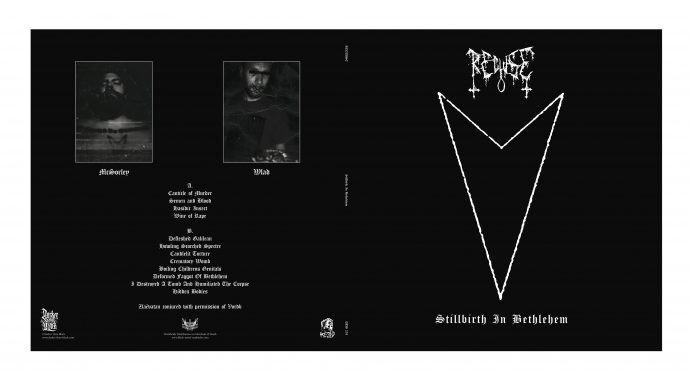 Recluse is the solo black metal project of Phil McSorley, who was a member of Cobalt for most of that band’s history so far. The first Recluse demo was released by Graceless Recordings in 2013, and the next year brought an EP named Frozen Blood and a compilation under the name of The Black Famine. On September 16, Darker Than Black Records will release the first Recluse LP, Stillbirth In Bethlehem (with a CD edition coming from Vault of Dried Bones).

McSorley plays everything on Stillbirth, but the vocals include not only McSorley’s but also contributions on each track by Wlad Drakksteim of Vlad Tepes in his first recording since that band’s last release, Morte Lune, in 1996.

For fans of the French black metal collective from the ’90s known as Les Légions Noires, the appearance of Wlad will itself be reason enough to dive into this album. Beyond that, Stillbirth could be understood in other ways as an homage to the LNN and such bands as Belkètre, Torgeist, and of course Vlad Tepes itself. But the album is worth hearing even if you know nothing of the Black Legions or (like me) have only brushed against the surface of their music.

It’s an understatement to say that Stillbirth is an intense experience. Listening to it is like entering the mouth of hell, or at least a particular kind of hell. It’s a closed circuit of pain, hatred, violence, and grief.

When I first heard the album, and as you will hear it below, it was as a single track (and it may eventually be released as such in a later edition), even though it consists of 12 tracks, most of them in the two-to-three minute range. I eventually listened to it with an index based on individual song titles and lengths, because otherwise it’s not always clear when one track ends and the next one begins.

Some of these tracks could stand alone, because they are stitched with penetrating melodies. The rest may make sense only in the context of the album as a whole, as tools used to deepen the overall experience — the experience of hurtling into a vortex of horrors.

Significant portions of the album are composed of eerie, flesh-crawling, deeply unsettling ambient sounds, coupled with the even more unsettling vocals (which I’ll come back to) or of dense storms of harsh, abrasive, violent noise — typhoons of distortion, discordance, drone, and feedback.

The tracks in which this horrifying black noise is dominant come on the B-side of the album. The songs that could best stand alone are to be found on Side A. A dismal, rising and falling melody threads its way through the rapidly pulsing drums and violent riffs of “Canticle of Murder”. “Semen and Blood” courses with a high, vibrating lead guitar melody with a doomed and mournful aura that’s absolutely magnetic.

Another melancholy melody glides over the bleak and seething maelstrom that bears the name “Wine of Rape”. The first song on the B-side, “Defleshed Galilean”, is warlike and vicious, yet it too includes searing, aching melodic components as well as a hell of a catchy riff near the end.

Where they appear, the melodies are simple, but crafted in a way that gets their hooks in your head, while your head is being torn apart by the assault of other forces. They are beleaguered and devastated in their mood, a painful glimpse of humanity in an otherwise inhuman and terrifying descent into a hostile realm of derangement and disgust. (The sound of birdsong and rushing water in the album’s closing track is about the only other touchstone to a world that isn’t being ripped apart.)

From beginning to end, the album is beset by a pack of monsters. The voices of McSorley and Wlad Drakksteim are undoubtedly terrifying instruments by themselves, but they have been further distorted, twisted, and mutilated by a variety of effects, and the results are frequently layered to produce a cacophony of unhinged and inhuman expressions — reptilian growling, gurgling, howling, shrieking, feeding, regurgitating, gasping, groaning.

A convocation of demons in a blood frenzy could not be any more disconcerting or chilling in its effect than what comes from the throats of Wlad and McSorley, as further tortured by the latter’s electronic manipulations. Those unnerving sounds are an inseparable part of the album’s mind-shattering impact.

I listen to, and enjoy, a lot of extreme, abrasive, violent metal, and I occasionally dabble in harsh noise. Even so, this album is out on the edge of my usual listening. It pushes the limits of audio terror with torrential gales of tuneless, rhythm-less, harrowing, discordant sound. It seems devoted to the creation of an atmosphere of ugliness and suffering, or simply the expression of a fractured and sinking soul.

I’m virtually certain that I don’t share or probably even understand the feelings and thoughts that inspired and are expressed by this album. Of course, I despise and detest certain individuals — who doesn’t? But with my almost invariably sunny disposition and general tolerance and even enjoyment of most people I meet, I doubt I have much in common with McSorley.

In my case, that doesn’t matter enough to turn me away from this album, even though I’m sure it will matter a lot to others. In my case, there is something about the experience of listening to Stillbirth In Bethlehem that feeds the need for raw, brain-scraping, soul-scouring emotional intensity in music. Beyond that, the technique and obvious care that went into the creation of this disturbing experience are also worth appreciating. And the songs that have a melodic component pierce the heart in a compelling way — just as they try to claw it into tatters.

A full stream of the album is below, formatted as a single track. I’ve included an index to the track list and run-times. As mentioned, Darker Than Black Records will release the LP, while Vault of Dried Bones is now offering pre-orders for a CD edition (here), and a tape is expected as well.

29 Responses to “AN NCS ALBUM PREMIERE (AND A REVIEW): RECLUSE — “STILLBIRTH IN BETHLEHEM””