As ever, I’m up to my eyebrows in new music drawn from a black vein that I want to recommend. For this SHADES OF BLACK episode, I’ve picked two songs from forthcoming releases and five complete new albums and EPs. I have pitifully few words to offer in praise of those complete releases. They deserve more, but I haven’t yet figured out how to stop time or even slow it down, and a few sentences of introduction are all my time allows me at the moment.

Sweden’s Ofermod includes members of such bands as Serpent Noir, Nefandus, Head of the Demon, and Mortuus (among others). The band’s first EP was released in 1998 and their subsequent releases have included two albums (in 2008 and 2012) and a 2014 EP (Serpents Dance). They are now at work on a new album named Sol Nox that will be released by Shadow Records at some point later this year, which will include lyrics written by Dr. Thomas Karlsson, founder of the draconian Order Dragon Rouge. The striking artwork was created by Cold Poison.

A few days ago the first single appeared — a track named “The Alpha of the Antichrist”. Ofermod bring it hard and fast, capturing a feeling of boiling chaos and wild ferocity surrounded by the vapors of otherworldly, occult mystery and looming magnificence. The vocals alone are pure fire. 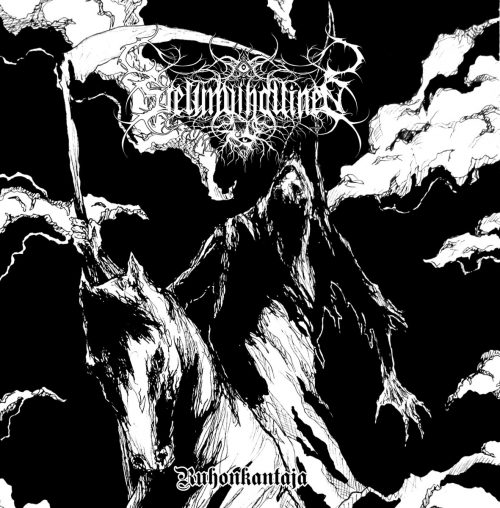 Sielunvihollinen are a black metal band from Finland whose second album Ruhonkantaja will be released on April 1 (CD and vinyl) by Darker Than Black Records. The cover art is by Maxime Taccardi. The song below is the album’s opening track, “Maamme Hauta”.

The song is a raucous piece of work, but it’s as highly infectious as it feral and ferocious. It romps and rocks hard, with an array of melodic riffs that display the kind of songwriting talent which puts this album on the radar screen immediately.

The digital version of the album is now available for pre-order at Bandcamp: 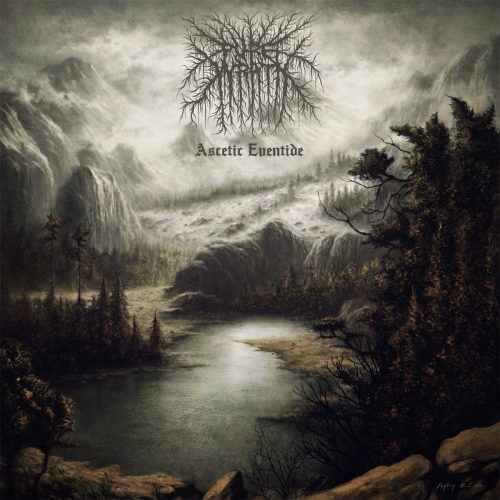 Near the end of last year I discovered Pure Wrath, the remarkable solo project of Januaryo Hardy from West Java, Indonesia, through an advance song named “Colourless Grassland” from Pure Wrath’s debut album named Ascetic Eventide. The album has now been released by the Indonesian label Hitam Kelam Records, and it’s also now available on Bandcamp. What I wrote in December about “Colourless Grassland” is true of the album as a whole:

“If you didn’t know this music originated in Indonesia, you might think it was born in Cascadia or perhaps the northern climes of Europe. It’s both chilling and vibrant, both melancholy and sweepingly beautiful. Near incessant blast-beats provide the driving propulsion at first, with hard edges furnished by the acid shrieks and the abrasiveness of distortion, yet the powerful melody is gripping.”

The album’s wonderful cover art was created by Aghy Purakusuma. Seriously, immerse yourself in this music — you won’t regret it. 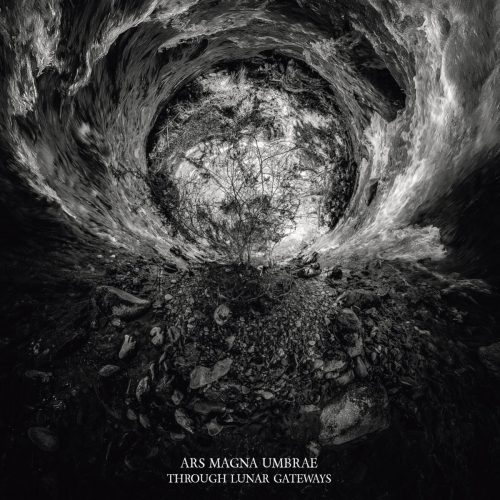 Ars Magna Umbrae is another one-man project, this one the creation of Polish artist D.A Khthōn. The project’s debut EP Through Lunar Gateways was released on February 14, with cover art by Nöt and guest vocals by Hekte Zaren. In a word, it’s a stunner.

The music relies heavily on dissonant and disorienting melodies with a spectral cast, creating chilling atmospheres of terror and torment. Nightmarish visions swirl about the music both when the band is in the throes of a bestial blood frenzy and when it simply feels like the music is sailing into a haunted void or on the brink of a mental breakdown. The variation in the vocals between deranged panther-like shrieks and unsettling wails (as well as operatic female vocals) is another strength in a staggeringly strong debut. 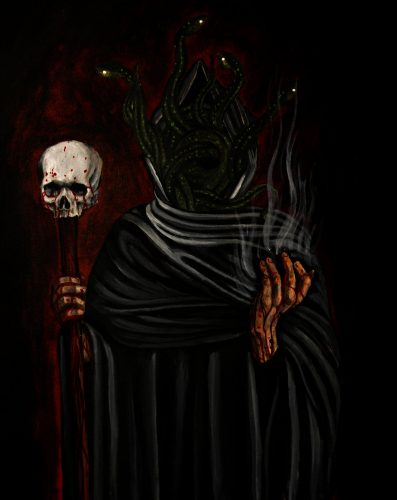 The music sounds like a deep and unsettling disturbance in the planet’s magnetic fields, or the nighttime descent of majestic hungering dragons from above. The enormous heaving and surging sound of the down-tuned riffs gives the music an earth-quaking force, while the dissonance in the bleak, soaring melodies and the cauterizing vitriol of the vocals are skin-shivering. The spine-snapping drive of the rhythm section is just one more reason why the music keeps you rooted in place and tingling in dire excitement at the rise of this monstrous black power. Amazing….

Sluagh will be released by Invictus Productions on March 13 in a tape edition (pre-order here) but it’s also available digitally on Bandcamp right now: 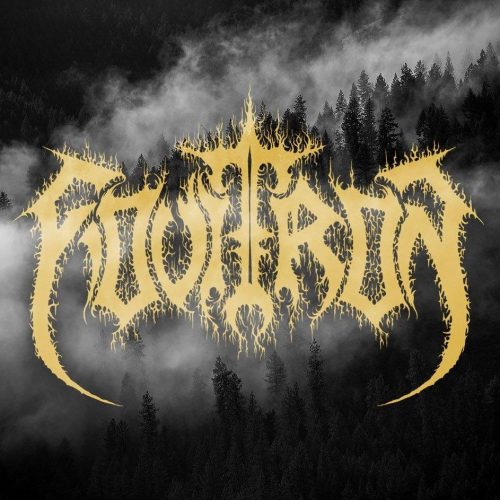 We now move from a new Irish band to a new Greek one, with a name that doesn’t immediately suggest any form of black metal: Fovitron. Their debut self-titled EP, which is available to stream below, was released via Bandcamp on February 18.

I fell under the music’s spell in very short order, within the first minute of the first track, in which the listener is introduced to the grim might of the deep, dismal riffs, the sweeping majesty of a symphonic melody, and the bestial savagery of the vocals.

Fovitron may not immediately sound like the name of a black metal band, but the music is indeed pitch black, a powerhouse offering of symphonic black metal laced with berserk guitar soloing as well as eerie symphonic overlays, mixing eruptions of frightening ferocity with both the descending pall of funereal melancholy and pulse-pounding races. Multifaceted, self-assured, and damned good!

In addition to the full EP music stream, I’m also embedding a lyric video for “The Order of Griffin Riders” (love that name). 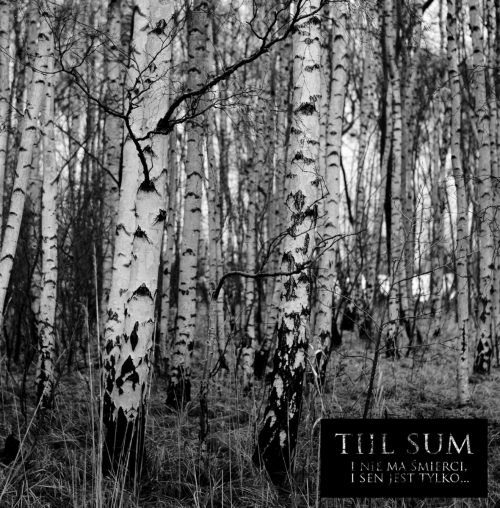 The last release in this collection is the one I discovered most recently, an EP named I nie ma śmierci, i sen jest tylko​.​.​. by the Polish band Till Sum. I learned of the EP because it was mixed and mastered by the man behind Autokrator and N.K.V.D.

This is Tiil Sum’s fourth release overall. The cascading waves of vibrato guitar, the light-speed thunder of the percussion, and the raw abrasiveness of the vocal agonies give the music both vibrancy and a depressive atmosphere of wrenching turmoil. Yet the songs also include moments of uplift, introducing guitar melodies that are transcendent and beautiful — though still tinged with sorrow — along with passages that are staggeringly bereaved and hopeless. I found myself completely carried away by the passion and craft displayed in the music.

P.S. When I find out the source and meaning of the choral voices at the beginning of the second track, I’ll add that here.

UPDATE:  And the answer to my question about those choral voices is provided by Adam in the Comment section below. Really a brilliant addition to the song.