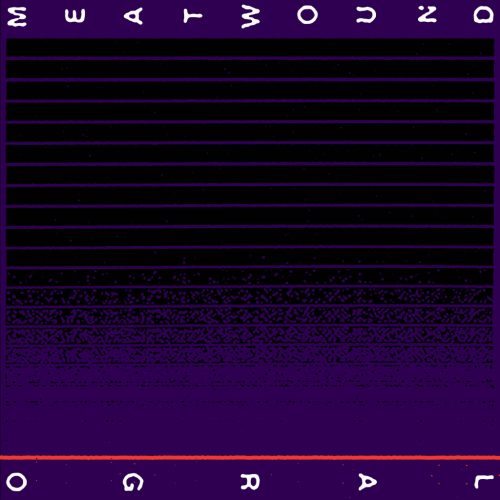 You can’t accuse Tampa’s Meatwound of picking a misleading name for themselves. But this song “Séance“? That title might be a bit of a misdirection… unless you contemplate a Lovecraftian seance, one that brings some nightmarish horror into the haunted house and you have to run for your life.

“Séance” is the name of the song we’re premiering. It comes from Meatwound‘s new album Largo, which Magic Bullet Records plans to release on May 12, I guess because they think you’d look better breathing heavy, with black eyes and fewer teeth. 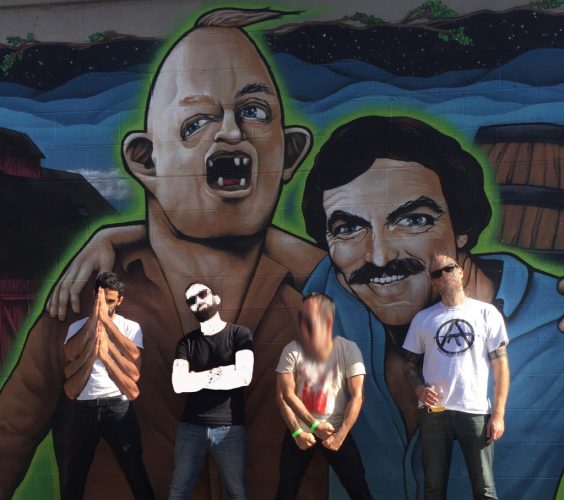 I got an e-mail directed to our site a few days ago from a long-time reader who asked (politely) “if there’s any chance you could make it more apparent what the album you’re discussing is going to sound like”, because “the opening few paragraphs on each article/review on your main page don’t actually indicate what the style of music is going to be”.

Even if I were more inclined to grant that request than I really am, it would be a heavy lift in the case of “Seance“. I could toss out the tags from the Bandcamp page for the album — “punk death florida hardcore meatwound metal post-rock shoegaze sludge tampa”. Did that help?

Let me just do it my way, okay?

I’ve had so much fun listening to the bass-player and the drummer on this song. I’ve listened to the track multiple times doing my damnedest just to follow what the hell they’re up to. I’m still quite conscious of the vocalist continuing to howl, bray, and yell like a crazy man with a knife, and the guitarist causing his instrument to convulse in increasingly violent throes of dementia — needling, pulsing, scraping the enamel off your teeth. They’re hot as hell, too, but man, the rhythm section kills it on this song.

What they do is part avalanche, part concrete-splitter, part acrobatic team (wearing steel-toed boots), part hummingbird the size of a condor (shut up, I’m doing this my way). They’re manic and punishing, but they’re also precise and inventive — and it’s loads of fun to listen to them cut loose on this song.

It’s a boisterous, intense, head-battering, brain-twisting track, that’s for sure. And if you’d like to know how it was created, read these comments by vocalist Daniel Shook (don’t worry, I don’t think you’ll get bored by the explanation):

“We used to practice in a storage unit that had previously been a hair braiding spot. The Black Diamonds and Pearls sign was still above the door and the interior was still pink and purple with plastic pearls and ribbons on the walls. I hung one of those Cursed Two goat banners on the drop ceiling to watch over us. During this time, we wrote Seance, Pigs, Reproduction Blues, and Largo.

“We had started writing Séance (aka haunted house) with our old drummer and the music stayed the same but as it came together with Leo on drums, it sounded more like sped up Calypso rhythms and we began referring to it as Polyester Motorhead. I started picturing some Serpent and the Rainbow shit.

“The lyrics were originally going to be more of a straight exorcism ritual transcript. Once the song was settled, it made more sense to set the table in the first half and then bring in the priest after the bass break in the middle. Who sets the table for a supernatural tale better than HP Lovecraft? So, I swiped from the scribe of unnameable horrors and eventually figured out how to land my white ass on Marty and Leo’s choppy island beats.

“Also around that time I met an English teacher that had never read HP Lovecraft and I was offended.

“Coincidentally, after invoking Lovecraft, a strange oily substance started seeping through the wall and mucking up all our shit. Turns out the hydraulic lift in the mechanic shop next door sprung a leak. We had to move into a different space two units over and a biker church moved in to Black Diamonds and Pearls. It didn’t last long.”

Largo was recorded by Dan Byers at Rock Garden Studio, just south of Largo, Florida, with mastering by Dan Randall at Mammoth Sound. The artwork was created by former Florida Man Chris Norris, aka Steak Mtn.

Largo will be issued through Magic Bullet Records on purple vinyl LP and digital platforms. They’re not paying for your dental work. Pre-orders can be placed here:

And if you’re in the vicinity of any of these locales, you can catch Meatwound live: