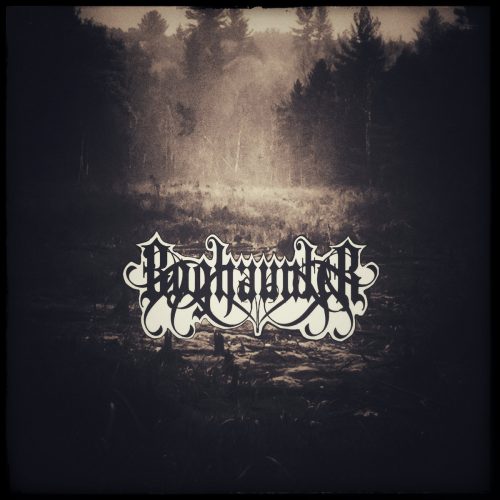 When I first saw the name Boghaunter I made some guesses about the nature of the music crafted by this band from New Hampshire; some of you are probably doing the same thing right now. The name made me think of a dark, dense swampland, the chill air heavy with moisture and the aroma of decay, the features of the landscape obscured by shadows but also by mist, a place where lost spirits wail in the distance. And so I had some kind of slow, spectral doom in mind.

It turns out that wasn’t a bad guess, but as I discovered — and as you’re about to discover — it wasn’t a completely accurate one either.

On May 4th Seeing Red Records will release Boghaunter’s debut EP, Writhe. It consists of two substantial tracks, and today we’re presenting the premiere of the first of those:  “Constellation Vows“.

“Constellation Vows” proves to be an emotionally intense and panoramic musical journey. The music is poignant, hauntingly beautiful, and staggeringly heavy — not merely in the usual sense of that word, but also in the back-breaking weight of the grief that emerges in the course of its ebbing and flowing movement.

Not all songs are based on the kind of personal experiences that leave permanent marks on your life, but it sounds like this one might have been. This is Boghaunter’s comment about the song:

“Inspired by the slow fade of a loved one’s health, the songs’ lyrics chronicle the cherished memories of two individuals. Beginning as distinctly separate accounts, they slowly converge to become indistinguishable and interchangeable, as all life inevitably blurs to its end. It speaks of losing love and life, as well as the hope that in our later years we’re still able to recall our most treasured experiences.”

Over the course of 15 minutes, the music alternates between softer and more massive segments, and evolves as it does so. At the beginning, it is sensual and seductive, with a beautiful reverberating guitar melody that’s lilting and chiming, ringing out in ethereal tones over a slow thumping drum rhythm and a bass line that’s both pulsating and sinuous.

And then the music makes its first dramatic change with the appearance of a huge, distorted riff that sounds brooding and grim, punctuated by booming drum detonations. Wretched shrieking vocals cut like a knife, and tear-stained lead melodies resemble the sound of moaning and wailing.

These changes continue, the mountainous riff disappearing, and the beautiful rippling and chiming guitar melody returning, bringing with it a wistful feeling — but a hammering drum rhythm leads back into an even more emotionally dismantling heavy section, the vocals reaching new heights of mental and emotional collapse.

When those ringing, ethereal guitars reappear again, they’re joined by somber clean vocals. The alternations continue, but they come more and more rapidly and without warning — almost shockingly so — and then they seem to intersect, the clean voice soaring and the harsh one burning in the throes of anguish.

Near the end the guitars vibrate, echo, and surge in a thrillingly incandescent sequence over a head-hooking rhythmic drive before that big craggy riff returns, accompanied by a trilling lead guitar. That immensely vibrant but otherworldly sequence is an astonishing thing to witness when it happens. But, upon reflection, the whole song is astonishing.

And there’s another one coming right behind it, one named “Ordeals“, but we’ll leave that one for another day.