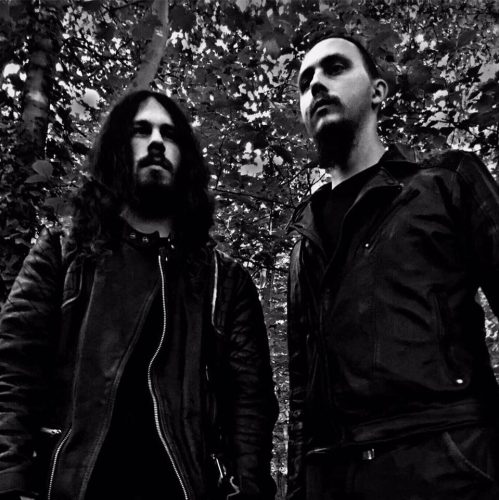 (Andy Synn forges ahead with the 2018 version of his series focusing on new releases by UK bands.)

Because we believe education is so important, today’s edition of “The Best of British” is brought to you by the letter ‘E’ and the number ‘3’. And, please, do pay attention, as there will be a test at the end. 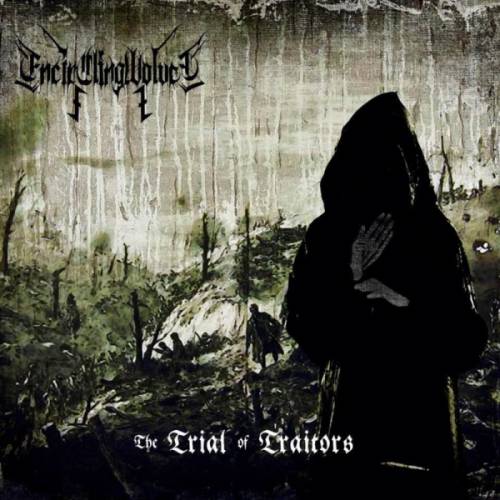 ENCIRCLING WOLVES – THE TRIAL OF TRAITORS

The Black Metal scene here in the UK is currently entering another one of its most fertile periods, for better or worse, with multiple bands, artists, and projects sloping in from the mist-shrouded moors and shadowy streets to attempt to prey upon a willing (and sometimes unwilling) audience.

Of course not every Black Metal band is created equal, and I can generally name five times as many mediocre and generic examples of the style as I can ones who actually manage to do something which stands out from the crowd.

That being said, every so often I stumble across a gem of an album which I think actually deserves writing about, as is the case with The Trial of Traitors by Encircling Wolves.

The seven tracks here (clocking in at a total of just over thirty minutes of music) are a prime example of Black Metal at its most vicious, venomous, and visceral, but also display a surprising amount of versatility too, blending the expected barrage of blistering blastbeats and barbed riffs (“Zionist”) with an array of surprisingly sharp hooks and solos (“Flames of the Old World”) and doomy atmospherics (“Apathy, Regret, Loss”), all of which serve to expand the band’s sound beyond the simple basics.

Granted, the production could perhaps do with a little bit of a spruce-up – I have nothing against albums going for a rough and raw sound, but there are moments here and there on The Trial… when the guitars end up a little buried beneath the cacophony of raging vocals and ramshackle drums – but the devilish duo who make up Encircling Wolves still display a keen grasp of structure and dynamic, mood and melody, particularly during the album’s standout (and penultimate) track, “Of the Ice”.

Of course while some of the lyrics and track titles (“Altar of Tolerance” anyone?) betray a certain world-view that’s more than a little bit retrograde and reactionary (the band’s claims about the degeneration of modern society and their yearning to return to the glory of a previous age aren’t particularly edifying or original either, truth be told), I’ve always said that you don’t have to agree with a band’s message to be able to appreciate their music, and I trust our readers enough to be able to make their own decisions in this regard, particularly since said music is just so damned good.

The choice, as always, is yours. 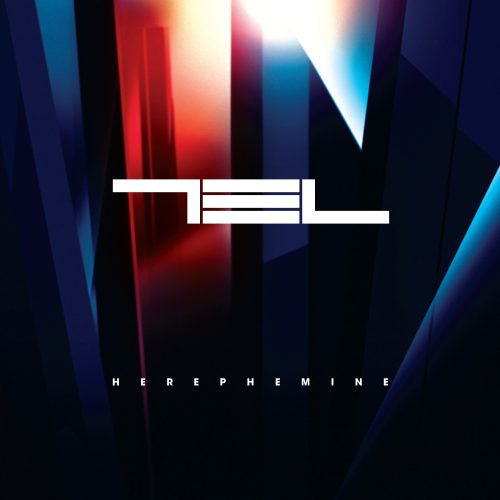 One word which I’ve seen thrown around with increasing frequency when referring to the work of London-based Post-Metal quintet The Ever Living is “cinematic”, and one listen to their debut album was enough for me to understand why, as the majority of the tracks presented here certainly do seem to be in possession of a certain je ne s’ais quoi designed to stimulate some seriously vivid sensory impressions.

Fittingly enough, considering the album’s shiny, multi-coloured cover, these tracks also deal in a multitude of musical shades and emotional textures, and while the basis of the band’s sound is firmly founded in the Neurosis/Isis/Cult of Luna school of abrasive atmosphere, the final product (which the members of The Ever Living have been known to dub “Ambient Metal”) strongly recalls the similarly evocative and expansive style of the hideously-underrated A Swarm of the Sun (whose upcoming album is one of my most anticipated of the year), as well as the cultivated catharsis of King Apathy (with late-album highlight “Funereal Waltz” being a prime example of this).

And while, when all is said and done, Herephemine is probably a little too long for its own good (at twelve songs, and just under sixty-six minutes, there are definitely periods when the album starts to meander or chase its own tail a bit), when everything all lines up just right the musical experience is nothing short of absolutely mesmerising.

Whether it’s the bold, captivating (and, yes, “cinematic”) strains of opener “The Great Defeatist” – which deploys its bombastic blend of raging vocals, shimmering keys, and churning riffs to stunning effect over the course of six scintillating minutes – or its similarly brilliant, but even more atmospheric, companion “New Mutiny”, you can’t say that the band don’t put their very best foot forwards, particularly in the latter track, which is nothing less than utterly spellbinding from start to finish.

The heavy use of keys and electronic embellishments throughout the album are one of the major reasons why I drew comparisons above with the work of A Swarm of the Sun (just take a listen to the riveting opening to “Incandescent Array” or the hypnotising ambience of “Nocturnal Itch” for more evidence of this), and their careful incorporation (overseen by vocalist Chris Bevan Lee, whose anguished scream is also another one of the record’s most well-honed weapons) into the music found on Herephemine is one thing which helps  The Ever Living stand out just that little bit more from the majority of their Post-Metal peers, as their inclusion serves both to expand and enhance the scope of the band’s musical vision.

Ultimately, despite its (altogether quite minor) flaws, Herephemine is one incredibly engaging and immersive piece of work which practically demands, and fully deserves, the full engagement and attention of its listeners to truly appreciate the many musical marvels it offers.

So set some time aside, dim the lights, and prepare for a deep-dive into the swirling sonic seas. 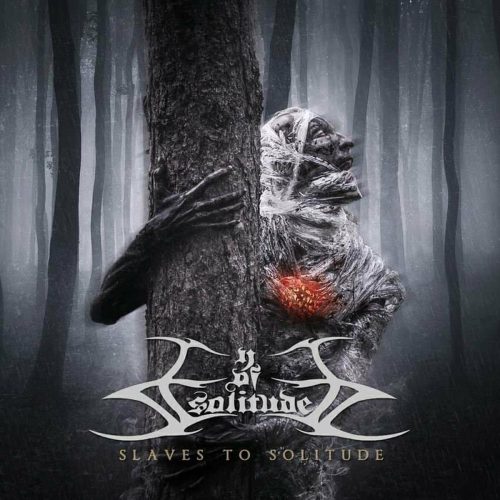 EYE OF SOLITUDE – SLAVES TO SOLITUDE

Those of you who’ve been following the site for a while will probably be aware that, generally speaking, we’re big fans of Eye of Solitude and their fearsome brand of funereal Death/Doom.

For whatever reason though, their previous album, 2016’s Cenotaph (which we were lucky enough to premiere here) didn’t stick with me as much as I hoped it would, despite the band’s best efforts.

Thankfully however, I can already tell that things are going to be different with Slaves to Solitude, whose five tracks collectively comprise some of the best music I’ve heard from the band since their career-defining Canto III.

Take the groaning morass of gargantuan riffs and sonorous growls which makes up opener “The Blind Earth”, for example, whose extensive length and slow, atmospheric introduction both demands and rewards a fair bit of patience on the behalf of the listener, and which serves both as a perfect introduction to the band and a perfect re-introduction for any fans who might have lost touch with the group over the years.

“Still Descending” is, if anything, even doomier than its predecessor, and quickly serves to remind you how creative EoS can be with the moody musical palette at their disposal, as the quintet effortlessly incorporate a mix of haunting ambience and gloomy, Swallow the Sun-esque melodies (both guitar-wise and vocally) into the mix without missing a beat, and then go on to take this approach a step further with the desolate melodic undercurrents and atmospheric trappings of “Confinement”, which successfully marries some of the record’s heaviest moments to some of its most melancholy hooks.

With “The Cold Grip of Time” the band trim things down to a relatively bite-sized 06:42, but don’t seem to have lost any of their impressive weight or heft in the process, particularly when it comes to the always prodigious gutturals of vocalist Daniel Neagoe, whose voice still retains all its inherent emotive power and potency even after so many years (and so many other projects).

And while I find that a lot of Doom albums (Funeral, or otherwise) tend to overstay their welcome, Eye of Solitude’s decision to end things with track five, the bleakly beautiful, brazenly brutal “Boundless Silence”, says a lot about the band’s inherent grasp of album structure and dynamics, leaving the listener almost-but-not-quite fully satisfied, and still wanting more, rather than feeling bloated and overwhelmed by an overabundance of dreary doom and groaning gloom.

Most definitely – in my opinion at least – one of the Doom Metal high points of 2018, Slaves to Solitude successfully achieves that rare feat of providing a listening experience which is both utterly devastating yet eminently re-listenable, and will doubtless make a prominent appearance on many EOTY lists.

15 Responses to “BEST OF BRITISH (PART 4): ENCIRCLING WOLVES / THE EVER LIVING / EYE OF SOLITUDE”