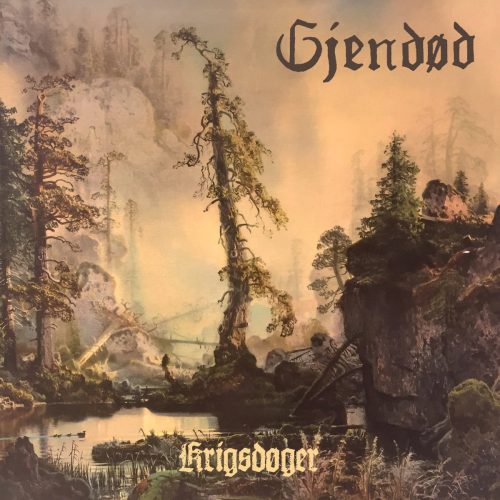 In April 2016 we premiered the self-titled debut EP of a Norwegian black metal band named Gjendød. The following year we premiered a stream of the duo’s first album, Nedstigning, which was released by Hellthrasher Productions. And now we’re re-joining Gjendød again for another release, a new album named Krigsdøger, which Hellthrasher will present on March 9th (CD and digitally) — but which you will have a chance to hear in its entirety right now.

When I heard the band’s debut EP my first impression was that if we could plug the energy of those tracks into electrical grids, we could decommission vast numbers of power plants — though we wouldn’t do much to reduce global warming, because the songs were hot as hell. I found it terrifying and hallucinatory, ingeniously conceived and expertly performed. 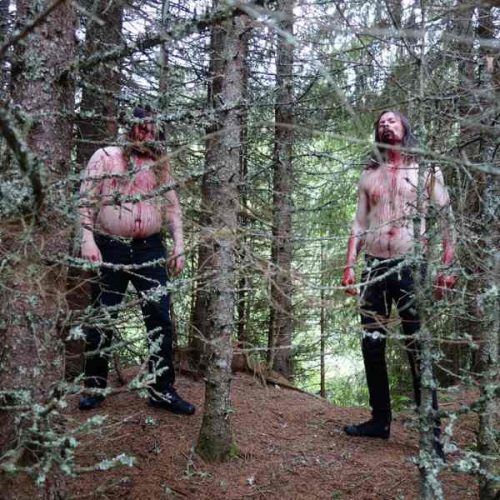 The debut album was even more impressive, revealing more facets of Gjendød’s obsidian grimness. It was dramatic, ice-cold, and beguiling, equal parts majestic and morbid, incinerating and depressive. While it was a devoted embracing of Nordic black metal traditions, it provided changing shades of frost-bitten intensity while never relenting in its exposition of a pitch-black hopelessness.

But I have no hesitancy in saying that Krigsdøger is the band’s best work yet. They continue to demonstrate a powerful talent for channeling contrasting moods of ravaging cruelty and deep despair, but here they’ve raised the impact of the music to near-mythic levels, portraying these dark and thoroughly dramatic sensations in a way that seems unearthly, frequently creating an atmosphere of chilling grandeur or haunting catastrophe.

One of the album’s great attractions lies in the way it was produced — with a clarity that allows the remarkably evocative bass notes and vibrant drumming to make their own distinct impacts, and with a guitar tone that shines with an incandescent gleam. To be sure, the sounds aren’t entirely free of distortion — the vocals are particularly abrasive and harrowing, and there are enough other rough edges in the songs that the hostile power within them thrives.

Over the course of the album’s nine tracks, the band tend to cycle back and forth between extravagant tumult and blood-freezing gloom, though the changes aren’t entirely predictable. “Om å tro” is certainly a blazing way to begin, an immediate onslaught of thundering drums and rapidly pulsating bass, wrapped in an enveloping storm of writhing riffs and scalding vocals. The mood of the music is fiery, and that incandescent quality of the guitars is striking — there is a kind of luminescent magnificence to those sounds (though the riffs are also scorching).

There’s a sequence in the opening track in which the drums clatter over a droning tone, and the bass transforms into a moody creature, and that’s a hint of other transformations to come. “Livet ditt“, for example, is mystifying and mesmerizing, anchored by a prominent moody bass  (there’s that word again) and a slow metronomic snare rhythm, again surrounded by a swirl of glimmering guitar. The drumming becomes more head-moving as the riff boils in a manifestation of dreamlike dementia, a feverish energy that contrasts with the methodical progression of the rhythm section.

But the riffing becomes even more riveting, creating eerie yet wondrous visions, swirling and soaring while the bass slowly undulates and the drums maintain a stately pace. We hear dramatic spoken words, and as the music moves nearer the end, the mood of the song darkens substantially, becoming more hopeless, more harrowing.

Gjendød switch gears again in “Når sårene er renset“, creating an atmosphere of fearsome splendor and ecstatic savagery. The song is so explosive and so exultant that you might feel your heart trying to burst from your chest, but (perhaps thankfully) “Hold pusten” is less hurried, and a cloak of gloom shrouds the song. The riffing is still electrifying and majestic, but the music becomes even more gloomy and pained. There’s a feeling of creeping delirium, and a sense of falling prey to chilling (yet alluring) hallucinations.

As the band continue to alternate in their manifestations of intensity, “En pålagt byll” is another stormer, which creates an atmosphere of tyrannical resplendence and scathing cruelty, while “Skill deg ad” is a descent into misery. The whirring riff, as it rises and falls, evokes an emotional splintering which flows from that misery, a feeling strengthened by the vocal cacophony of fury and pain. And on the other side of that song is the title track — the shortest on the album at less than three minutes — and it’s an extravagant rush, sadistic and cold, oppressive yet at the same time orgiastic.

“Å puste liv i råttent kjøtt“, on the other hand, proceeds at a funereal pace, with melodies as beleaguered and anguished as the plodding cadence. Here, the haunting glow of strummed chords signifies mystery, and eventually a scary magnificence
that’s mesmerizing, even though disturbing.

An album as striking and immersive as this one deserves a strong finish, and it has one in the instrumental closing piece, “Ut fra livet“. The beginning seems like a grand fanfare preceding an execution of a prince, or the annunciation of a prince of darkness. The music is powerfully ominous and eerie, made all the more eerie by strange bass permutations. The drums begin to race, and the riffing becoming a whirling fog of pestilence, through which a serpentine lead slithers and rears up to strike. The turbulence subsides, the rhythm section falls silent, and what Gjendød surprisingly (but cleverly) deliver at the very end is nothing but guitar picking — a vibrant harmony.

The cover art for Krigsdøger was painted by August Cappelen (1827-1852). As noted, Hellthrasher Productions will release the album on CD and digitally.

2 Responses to “AN NCS ALBUM PREMIERE (AND A REVIEW): GJENDØD — “KRIGSDØGER””