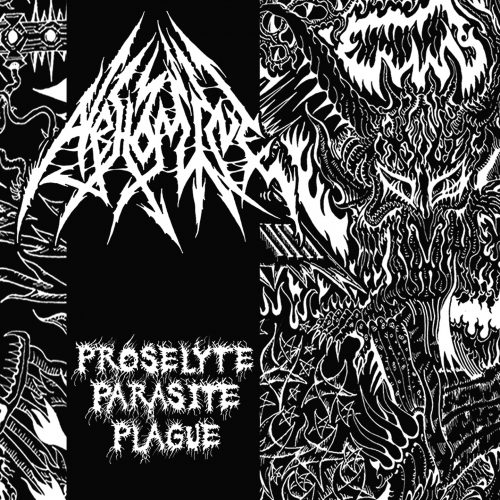 The name Pete Helmkamp will be a familiar one to fans of underground terrorists such as Angelcorpse, Order From Chaos, Revenge, Kerasphorus, Terror Organ, and Feldgrau — all of them bands whose ranks have included Helmkamp at one time or another. But he also has a project named Abhomine, and on February 28th Hells Headbangers and Osmose Productions will jointly release Abhomine‘s second album. Like the 2016 debut, Larvae Offal Swine, the title of the new record evocatively stitches together three words — Proselyte Parasite Plague.

On this new album, Helmkamp is accompanied by drummer/vocalist Cazz Grant, known for his work with Crucifier and Grand Belial’s Key, and together they race through a non-stop barrage of neck-snapping, mind-mauling, black/death barbarism, and we’ve got a full stream of it for you today. 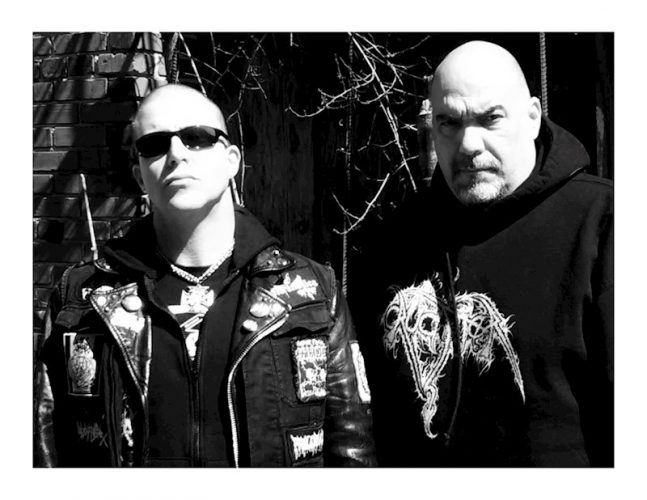 All that bestial ferocity is backed by Helmkamp’s vibrant bass throbs and thrusts and by seething, shape-shifting masses of poisonous buzzing riffs that morph into more dismal or more eerie or more deranged and violently ecstatic sensations. Meanwhile, Grant pierces through Helmkamp’s filthy riffage with head-butting, neck-snapping drum rhythms that are constantly progressing and changing, quickening or slowing, delivering momentous magisterial snare-and-cymbal crashes, scampering like a punk, or erupting in rapid-fire, somersaulting fills.

Whether through the carnal, pulsing riff that surfaces within “Infidel and Unclean”, the fiery, infernal whirl of “Gogamgoz”, or the wild, dervish-like contortions of “Blacklist” and “Saracen”, the music is rollicking and rapacious, persistently channeling a nasty, unchained, blood-rushing energy. Yet straight through to the cruel and crazed closing track, “Progeny Devoid”, the songs have a fiendishly sorcerous quality, even though they have the feel of music that’s stripped-down and primal. And actually, the no-frills, straight-for-the-throat quality of the music has a lot to do with that effect.

Abhomine don’t overstay their welcome on this new album, doing their dirty work in less than 24 minutes, and they have no use for tender mercies along the way. But as ugly, unforgiving, and unrelentingly malicious as the music is, it’s an electrifying rush that for certain minds will also prove to be addictive.

Steel yourselves and check it out below. The album will be released by Osmose and Hells Headbangers on vinyl, CD, and digitally. Pre-orders in advance of the February 28 release are available now.

4 Responses to “AN NCS ALBUM PREMIERE (AND A REVIEW): ABHOMINE — “PROSELYTE PARASITE PLAGUE””