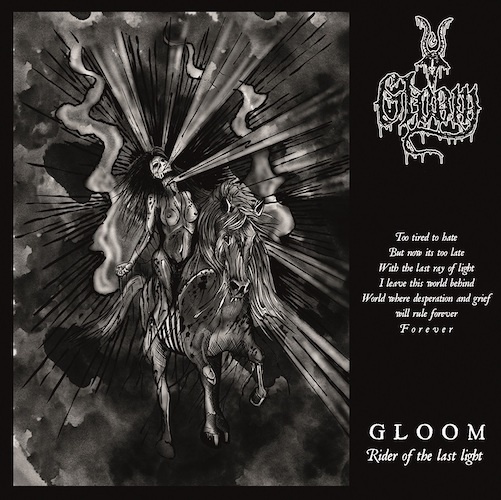 The riffing of Gloom has a raw and ravaging tone, the sound of gale-driven sandstorms or flesh-slicing blizzards — if not “lo-fi”, close to it — and it achieves dominance over the pounding of the drums and the hammering of the bass. The vocals are even more abrasive, the kind of throat-ripping shrieks that would permanently destroy the vocal chords of normal humans (and might put some listeners in mind of DSBM voices, though that genre label doesn’t completely suit the black metal that Gloom has fashioned).

But within these rough and raw maelstroms of sound, as captured on this Finnish band’s debut album, are powerful melodies and dynamic variations, melodies that don’t merely set hooks in the mind but have penetrating emotional power. True to the band’s name, gloomy moods are to be found within their vicious music, but “gloom” is not the word that comes to mind in listening to the album’s title track, which we’re premiering today. A better word might be “euphoric”, or “spectacular”. 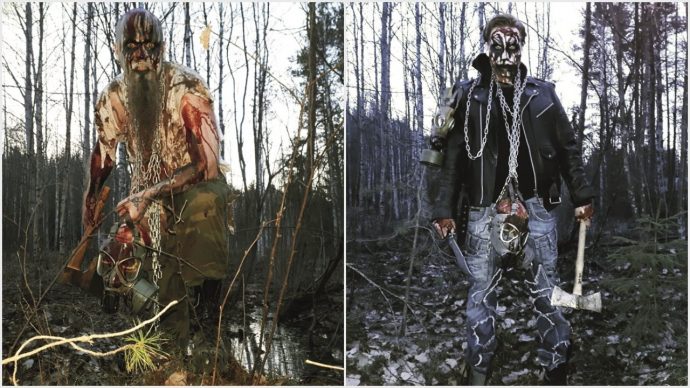 The name of the album is Rider of the Last Light. It will be released on June 26th by Spread Evil. It is described in the promotional materials as “the intersection where ugly urban despair and the madness of the woods meet, a collision of past and present resounding in all perpetuity, ruining your day now and forevermore”.

There is certainly the sound of madness in the title track you’re about to hear. It is also simultaneously cold, cruel, and glorious. The main riff swarms and pulses with incredible vibrancy — it spawns visions of blazing devil steeds racing across the sky and trailing flames. As mentioned above, the vocals are frighteningly unhinged and channel venomous fury. As the melody evolves over the sound of hammering rhythms and crashing symbols it darkens, but never loosens its firestorm intensity.

Well into the song, yet another exciting riff makes an appearance, one that darts and thrusts with a carnal swagger, and Gloom interweaves it when the flashing cyclone of sound resumes and reaches even further heights of incendiary ferocity.

“Rider of the Last Light” is the second track to be revealed from this new album. Below we’ve included a stream of the previous one,”Iron Claws of Black Metal“. It further demonstrates Gloom’s talent for crafting penetrating melodies that permeate the band’s slash-and-burn intensity (and in this previous song the core melodies are both steeped in melancholy and sweeping in their scale, but also menacing and vicious).

Spread Evil will release the album on CD and digital formats, with distribution through Militant Underground. For more info on how to get the album, keep an eye on the locations linked below.

3 Responses to “AN NCS PREMIERE: GLOOM — “RIDER OF THE LAST LIGHT””