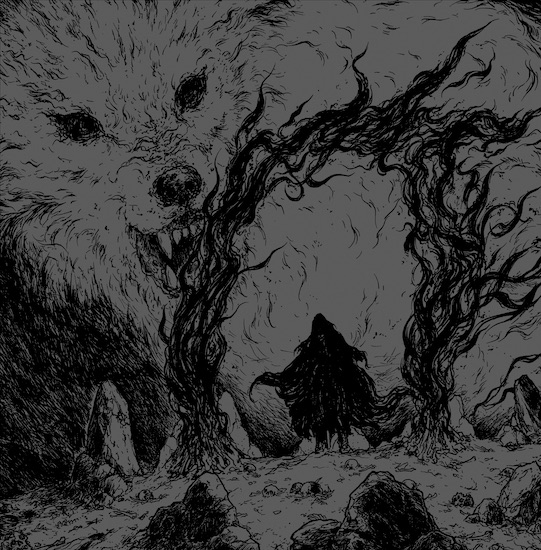 On their new third album, Spectres of Bloodshed, the international duo known as Blood Stronghold have created a musical soundscape that’s out of this world. To be sure, the music has visceral, physically compulsive energy, but it creates fantastical visions of ancient and mythical domains. It seems to draw menacing and vicious power from lycanthropic spirits but also spawns mental images of tragic grandeur and heart-swelling splendor. It’s a fashioning of black metal that’s both carnal and elegant, both blood-pumping and mesmerizing. It seems to hearken back to a long-lost age — or to one that only exists in the imagination. Once heard, it’s not easily forgotten.

And hear it you shall, because today we present a full stream in advance of the album’s release on vinyl LP by Nebular Carcoma and Satanik Requiem.

For those of you unfamiliar with the band, it’s the union of two talents. On vocals, guitar, and bass is the Australian Nightwolf, who also currently uses Runespell as a creative outlet and leaves behind him an impressive legacy in Eternum. Joining with him is the Polish drummer Krew, whose resume is as long as your arm and includes such bands as Necrostrigis, Ravenmoon Sanctuary, Ordo Sanguinis Noctis, and Starlit Woods.

“Edict of Conflict“, though it is relatively brief, gives you a quick introduction to some of the aspects of the music that are hallmarks of the band’s distinctive sounds. In that opening track, a martial drumbeat is joined by riffing whose sound shines, shimmers, and soars, creating a glorious sorcery in sound. The mere tone of the drums and the guitars is a signal part of the music, though how Nightwolf and Krew use those resources is even more vital.

“Unbowed Wolves” is marked by the sharp crack of the channel-shifting drums and a malicious, scalding voice, which rises to frightening screams. The layered guitars channel an otherworldly aura, while at the same time generating an instinctual physical response. The music is sinister, but becomes spectral as the drums vanish, the bass moans, and the guitars ring in bleak and haunting tones. But with a terrifying howl the music boils over again, driven by riotously surging percussion and guitars that radiate a blazing and brilliant light. And then that extravagant sound subsides and seems to transform into a mystical sensation in which solemn choral voices can be heard.

More mid-paced in its momentum, “From the Depths of Veles” is thoroughly entrancing. Its ringing chords and a vibrant bass pulse, infiltrated by a slow and seductive lead guitar, become spellbinding, even though the serrated-edge vocals remain a diabolically bestial presence. This song too briefly puts a chill on the skin, and then its mood becomes more despairing, though no less enthralling (the serpentine leads and gleaming chords cast such a seductive spell).

The simmering and seething guitars at the outset of “Blood Dawn“, on the other hand, create a feeling of tension and incipient turmoil, but the vibrancy of the drum patterns, the deep humming warmth of the bass, and the lilting quality of the melody make the music dance. As the song unfolds, it becomes the stuff of fantasy — of swords and sorcery. As in other songs, this one includes a softer and slower bridge, one that enhances the feeling that we’re in the midst of a mythic narrative. The energy of the song then increases dramatically — the drums hammer like pistons, and the guitars not only pulsate but also generate an audio panorama of glorious, sweeping sound.

“Forests Dark Eyes” is the album’s longest track, and it truly is a dark journey, one that builds from spirited drumwork and guitars that ring in melancholy tones but with the evanescing quality of a desert mirage. That opening sequence works its magic like so many other passages in the album — yet here the supernatural quality of the music is joined with a very human feeling of longing and sorrow in the melody. The drumming grows increasingly fast and acrobatic and the bass notes more feverish as the entrancing waves of guitar swirl around the listener like a wondrous mist. Once again, there is a quiet and mysterious bridge, and on the other side the music becomes more desolate. The drums still vibrantly patter and crack, the bass murmurs with urgency, but the voices are solemn and the melody is a refrain of grief.

Blood Stronghold have done a fine job of ordering the music across the album to create dynamic contrasts, as well as a beguiling flow across the tracks, and so “Crowned Virtue” has a vigorous head-moving pulse as well as immediately gripping (and equally head-moving) heavy metal riffs, yet it still holds fast to that feeling of ancient, mythic music that inhabits the entire record. The rhythm section really put on a show in the song, but the music also immerses us in grand cascades of scintillating though tragic melody — and it also gets the blood racing in a war charge.

Rather than break the particular spell of “Crowned Virture“, Blood Stronghold begin the final track, “Sunder“, with a slow, moody guitar arpeggio, slowly drawing the listener into one last experience of thrilling drumwork, bubbling bass tones, and hypnotic though beleaguered melody. The vocals, as ever, are fierce and frightening, but the music becomes so splendorous that it’s easy to forget that the wolf is close to your throat. Ever-drawn to creating changes of pace and mood, the band convert the music into a more sober and stately experience, but ever-drawn to spheres of the imagination, they again make the music a soundtrack to excursions into realms of myth and majesty.

And because it’s the album closer, the song spirits us up to electrifying heights, somewhere high up among banners whipped by the wind beneath sun-bright clouds. Yet the album’s final minutes seem to pierce another veil ,into a place that’s even more mysterious, haunting, and perilous.

Spectres of Bloodshed was originally set for release on July 2nd, but delays at the pressing plant have required a postponement. Check out the links below for updates on the progress of the release and how to obtain it.

2 Responses to “AN NCS ALBUM PREMIERE (AND A REVIEW): BLOOD STRONGHOLD — “SPECTRES OF BLOODSHED””