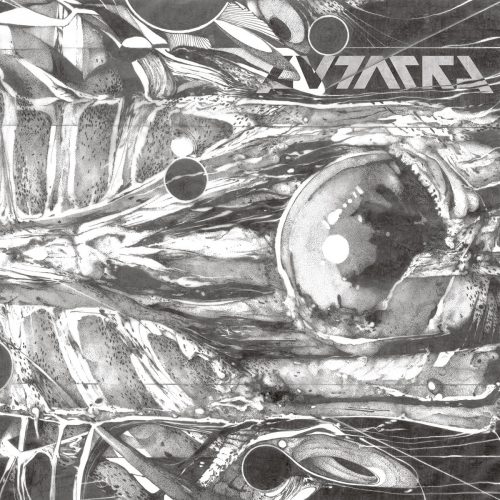 (Here’s Andy Synn‘s review of the debut album from Autarkh, set for release this Friday via Season of Mist.)

Metal’s relationship with electronic music – in all its various forms – is a long and fractious one.

For every artist who wholeheartedly embraces the fusion between the two genres there are a thousand more simply going through the motions, adding a few half-hearted glitch effects and booming sub-drops in a desperate attempt to be “down with the kids” or because they think (incorrectly) that it will somehow make them sound “futuristic” and otherwise make up their complete lack of vision (I think we all know who I’m talking about).

Still, the number of successful hybrids (from Godflesh to Fear Factory to Author & Punisher) can’t be dismissed, and Black Metal in particular has a remarkable history of combining pulsing electronic beats and pounding industrial rhythms with ear-scraping riffs and throat-scarring shrieks.

Into this tangled tradition steps Autarkh, the new project from former Dodecahedron guitarist/composer Michel Nienhuis, whose debut album aims to build on that group’s short but impressive legacy – with all the untapped potential and weight of expectations that implies – while also further blurring the lines between the organic and the metallic, the animal and the artificial.

And while Form In Motion is neither the direct sequel to Kwintessens that some might have (erroneously) expected, nor the paradigm shift that it perhaps could/should have been, it is certainly one of the most unique and unorthodox albums I’ve heard so far this year, with a distinct voice and vibe all its own.

Case in point, while the underlying genetic structure of Autarkh may be recognisable when scrutinised under a microscope – as much a cross-breed of Meshuggah, Mysticum, and Ancient Methods as it is an amalgam of Akercocke, Aphex Twin, and the more aggrotech influenced side of Anaal Nathrakh – the band’s sound is more than just the mere sum of its parts, although the form of those parts evidently dictates the group’s overall function.

This is particularly apparent when you take a look at the physical make-up of the band – which also includes producer Joris Bonis, guitarist David Luiten and electronicist Tijnn Verbruggen – where the absence of a real/live drummer has an immediate impact not just on the percussive side of the album’s sound (with every beat, every blast, and every break produced purely electronically) but on the way the songs as a whole are written and structured, as they’re no longer entirely beholden to the usual human limitations.

But while this definitely helps enhance the predatory, post-human vibe of the album, Form In Motion is far from the sterile, perfectly-programmed audio-automaton you might expect, as these ten tracks are practically littered with fractal filth and digital detritus that feel more like the product of spontaneous self-generation than something pre-planned and pre-determined.

Added to this is the inherent ugliness and unpredictability of the band’s biological component which, from the distressingly visceral (and surprisingly varied) vocals – running the gamut from grisly, choking growls, practically dripping with menace and bile, to strangled, semi-human pseudo-cleans – to the jagged, anxiety-inducing guitar work – equal parts erratic, Meshuggah-like elasticity and dynamic, Dodecahedron-esque discordance – ensures that there’s always an edge of “what’s going to happen next?” to every single moment of the album.

What really surprised me about this record, however (especially considering where so much of its DNA comes from), is how disturbingly infectious it is, with the band injecting their quasi-techno, bio-mechanical Black Metal mix with multiple worms of viral melody and self-replicating hooks that transform the dissonant digital pulse of “Turbulence” and the sinister cyber-metallic soundscapes of “Introspectrum” (to name but two of the album’s coldly compelling compositions) into something that’s been designed – or has evolved – to burrow its way deep into your subconscious.

Perhaps the one thing stopping me from rating this album even higher is the sense that Form In Motion is just one small (albeit significant) step for the band, rather than a true evolutionary leap, and that the best, the true apex, of what they might one day be capable of, is yet to come.

But, then perhaps that’s the point. This isn’t their final form. It’s just a snapshot of a band, and a sound, still in flux. Still growing. Still changing. Still… in motion.

And, where they go from here is anybody’s guess.

5 Responses to “AUTARKH – FORM IN MOTION”