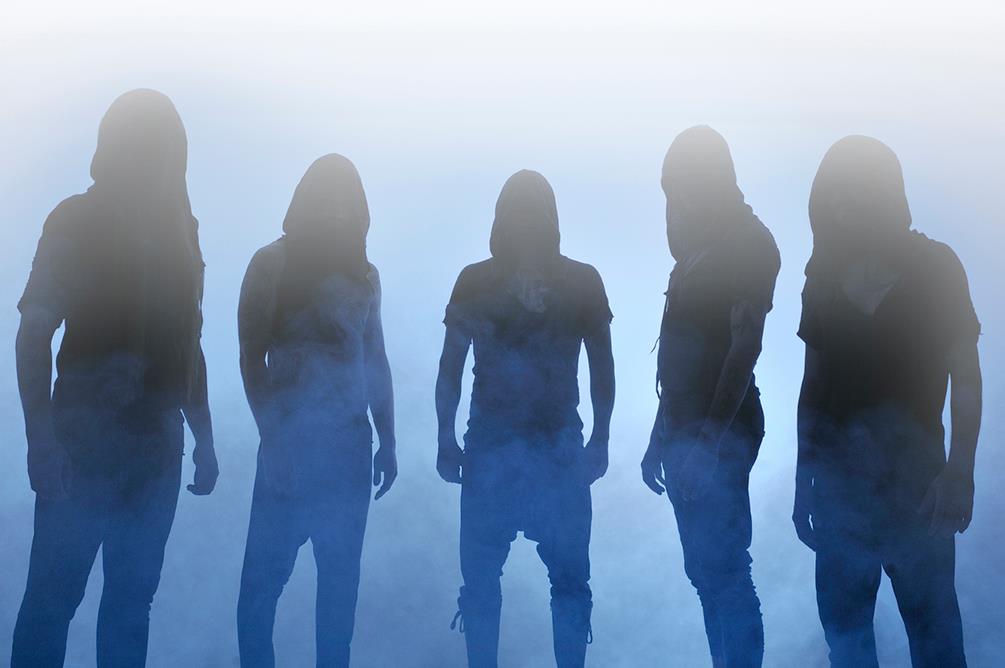 With its undulating back-and-forth between – on the one hand – a swaggering array of grim ‘n’ groovy riffs and rhythmic, rock-solid, four-to-the-floor, drum beats, and – on the other – a series of strafing blasts and searing tremolo parts, “EndZeitGeist” is an impactful, attention grabbing opener, make no mistake about it, which quickly establishes the bands as “ones to watch”.

It’s succeeded, in turn, by the darker, more doom-laden strains of “Next Stop: Disillusion Centre”, whose stuttering guitars and sinister synths combine to create an impressively dense and ominous atmosphere, which is then shattered and reconstituted, again and again, over the next seven minutes, with every sudden eruption of blasting intensity or downward spiral into haunting gloom.

The title track is arguably the most atmospheric of the three songs so far, carefully pacing itself to conjure a drawn out sense of dread and despair, but also not afraid to let rip when the moment calls for it, while the poetically titled “Shitfaced Existence” is just under seven minutes of hypnotic, almost tribal, drum work and bleak, brooding riffs, whose combination of snarling, seditious vocals and intricate, progressive songwriting recalls the best of bands like Dark Fortress, Blaze of Perdition, and their ilk.

“Endless Narcotic Fields” is six minutes of stomping guitars and ghostly synths, all wrapped around a core of blasting fury and malevolent melody, after which – following the somewhat stereotypical Black Metal misery of “Desert of Thoughts” – the listener is graced with the predatory prowl and scalding savagery of “The Perception of One in All”, whose second half in particular finds the band at their simultaneously most ferociously intense and grimly grandiose.

The transition from its initial blasting deluge into a moodier, more melancholy form – only to then shift back into attack mode once again – which opens “Stereotypes of a Sick Spawn” makes the track one of the record’s instant highlights, but it’s the move towards an even more melodic and atmospheric approach in the track’s second half (without totally abandoning its early intensity) which gives it such a lasting impact, one which lingers with you all the way through “Depressing / Depressive New World”, which itself features both some of the album’s biggest riffs, boldest hooks, and most brooding melodies.

Concluding with the shamelessly proggy strains of “Neon Fade-Out” (whose shades of both Shining and Schammasch provide a few clues as to where the band would go next), Generation Abomination may not have broken the mould, but it undeniably set ColdCell on the dark and dismal path which they have walked ever since, and should be praised for that alone!

The band’s second album really builds on that undercurrent of unsettling ambience and undiagnosed emotional trauma first hinted at on their debut, leaning more heavily both on shuddersome synths and grimier, groovier riffs, while also showcasing an even harsher and more harrowing – and all too fucking human – vocal delivery that recalls the pained, prophetic howl of Panzerfaust.

Both the scene-setting instrumental title track and the anxiety-inducing “Lifestyle Lunacy” are perfect examples of this darker, crueller, and more coldly calculated approach, especially the latter, which demonstrates how the band are just as confident/comfortable twisting together multiple moody/proggy/melodic guitar parts as they are laying down a withering hail of pure aggression, while the ominous and oppressive “Scum Eradication” pulls off the rare trick of managing to be just as heavy – in its own way – during its quietest moments as it is during its nastiest and blastiest.

The rolling kicks and ringing riffs which propel “Way to Prevail” would be more than enough reason to recommend this track on its own, but it’s the eerie layering of clean and harsh vocals (over scorching blastbeats, no less) during the “chorus”, along with the abrasive, atypical, stop-start riffage and rippling snare underpinning the bridge/solo, which raises the song above and beyond, after which the hypnotic, pulse-pounding strains of “Idols of Idiocrasy” serve both as a showcase for the band’s increasingly multilayered and multi-faceted guitar work and for the always impressive (and impressively varied) abilities of drummer aW, whose grasp of rhythm and flow really does make him the band’s trve MVP.

“Needle’s Asylum” is the sort of relentlessly grim, groove-driven soul-crusher – one laced with slithering, strychnine melodies and bathed in a sickly aura of decay – that mid-period Shining would definitely have sold their own mothers for another hit of, while the more expansive strains of “Dogma” give the band’s rhythm section (bassist In and drummer aW) another chance to shine as they guide the song down an ever more convoluted and claustrophobic path, where even the shimmering pools of calm seem to glisten and glimmer with barely-dormant dread.

With “Proliferation”, the album’s penultimate hymn to existential entropy, the band quote directly from the gospel of Rustin Cohle – “we are creatures that should not exist by natural law” – atop an angst-ridden array of grinding riffs, lithe, limber percussion, and tense moments of disquieting ambience, setting the stage for the album’s final cathartic scream into the void, “Modern Pestilence (Is Salvation”, whose initial focus on menacing atmospherics and malefic clean vocals provide the perfect kindling for the song’s steady, slow-burn build towards an epic, almost apocalyptic, crescendo.

“Growing Girth” opens the band’s third album in depressive and doom-laden fashion, casting a pall of subtly blackened gloom across the first few minutes of the track as it slowly, but surely, builds towards an eruption of incandescent rage.

As has become the band’s modus operandi, the richly textured guitars shift seamlessly from doomy heaviness to scathing dissonance to ethereal melody over drummer aW’s bombastic blend of torrential blastbeats and pulsing, proggy rhythms, while S continues to shred his vocal chords and empty his lungs like a man possessed.

But while all these elements continue to reoccur throughout the album, the overall impression of Those is of a record with an even darker and more atmosphere-focussed vision than either of its predecessors, as the morbid melodic grandeur of “Entity I” firmly demonstrates.

That’s not to say the band have lost their ability to unleash hell – once the floodgates fully open in “Seize the Whole” you’ll find yourself struggling just to keep from drowning in the blasting deluge – but there’s an overwhelming sense that the band have taken a conscious step towards an even more arcane and enigmatic sound this time around.

Nowhere is this more obvious than during “Tainted Thoughts” which, at just under twelve minutes, is the clear centrepiece and linchpin of the album, as well as the longest and most ambitious song the band have ever attempted.

From the constantly shifting and intertwining guitar work – huge, hanging chords shot through with veins of melodic misery, taut braids of coiling tremolo lines twisting around one another, undulating bass lines ebbing and flowing like blood-dimmed tides – to the ever-more propulsive, progressive, and creative drumming of aW, all topped off with a series of varied yet visceral vocal parts that showcase S’s striking physical and emotional range, “Tainted Thoughts” is the sound of a band pushing themselves beyond all their previous limits.

Wisely, however, the band don’t try and just repeat this same trick again immediately after, smartly switching gears to deliver the simmering, seditious grooves of “Sleep of Reason” (whose strong Dark Fortress vibes really stand out) and the moodily melodramatic strains of “Entity II”.

Concluding with the dynamic duo of “Drought in the Heart” and “Heritage” – the former a seven-and-a-half minute mix of dismal, despair-soaked melodies and heaving, doom-drenched riffs, interspersed with moments of sudden, whiplash-inducing acceleration, the latter a constantly shape-shifting nine minutes of devilishly dissonant riffs, driving bass licks, and devious structural twists – there’s no denying that Those marked a new level of maturity, and a new level of darkness, for ColdCell.

If you don’t get chills during the spine-tingling opening bars of “Scapegoat Season” then there’s a good chance that you’re already dead inside – although, chances are, that by the time the song has finished lacerating your eardrums and suffocating your soul that you might just have felt a little part of you die in the process – as the opening track to the band’s recently-released fourth album is one seriously desolate, at times absolutely devastating, amalgam of suicidal atmosphere and homicidal rage.

The title-track which follows is arguably even more atmospheric, though just as intense in its own way, immersing the listener in a claustrophobic cloud of writhing dissonance and wailing melody, underneath which the clever, creative drum-work of aW serves to once again elevate the song to an even higher level (fully justifying, in my mind at least, the frequent comparisons I’ve been drawing with similarly percussive powerhouses Panzerfaust throughout this feature)

“Open Wound” is just over seven minutes of seething synths, shivering tremolo, and ragged, rattling drums, twisted together into sharp-hooked shapes and lurid, hypnotic rhythms, all the better to catch the idle listener’s ear, whereas “Armoured In Pride” is equal parts midnight melody and doomy malice, blistering blackened fury and asphyxiating ambience, featuring some electrifying low-end interplay between the bass and guitars as well as an overarching atmosphere of nihilistic, nail-biting tension throughout.

“Greatest of All Species” continues to showcase just how comfortable, how confident – and, most importantly, how terrifyingly competent – the band have become at fusing echoing ambience and raging excess, as while the passages of tormented tremolo and torrential blastery are undeniably breathtaking in their intensity, it’s the simmering aura of horror and unease, the anticipatory calm before the coming storm, which makes this song so wonderfully, and horribly, effective.

(Almost) last, but by no means least, “Back Into the Ocean” finds ColdCell focussing their sound and adapting some of their more proggy and esoteric proclivities into a more mid-paced, grim-faced, groove-driven approach which combines hanging chords and nerve-jangling melodies, agonising shrieks and elegiac cleans (bringing to mind the most bleak and beautiful moments of bands like Mephorash or Panegyrist in the process), into one heart-stopping whole, after which the doomy, DSBM-adjacent strains of “No Escape” bring the album to a cruelly cathartic climax, ending it back where it began with a return to the same spine-chilling sense of atmosphere which opened the record.

One Response to “THE SYNN REPORT (PART 133): COLDCELL”