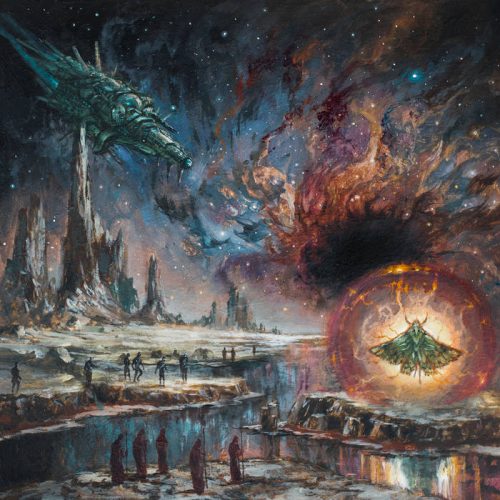 (Andy Synn gazes once more into the void… and finds the new album from Sallow Moth gazing back!)

I know I’ve said this before, but it still bears repeating – one of the (many, many) great things about writing for NCS is that we don’t have to stick to anyone’s schedule but our own.

Oh, sure, if we agree to host a premiere or some such then we’re bound by our word to stick to that date/time, but the fact that we don’t have any print deadlines to meet, no advertisers to placate, and no pressure from above to produce a certain number of articles or reviews every day/week/month means that we can be a lot more flexible with what we write about, and when we write about it.

Case in point, when lepidopterous Death Metal dreamer Sallow Moth surprise-released their new album, Stasis Cocoon, at the end of last week, I was able to quickly pivot and switch up my writing/reviewing schedule in response, ensuring that – hopefully – this succulent little slab of metallic sci-fi mayhem receives at least some of the attention it deserves.

Kicking off with the one-two combo of “Chalice of the Void” and “Stasis Cocoon” – the former providing instant impact in the form of just over three minutes of scorching Swe-Death riffage and gritty, gravel-throated vocals, the latter adding a little more melody and proggy strangeness while still keeping the intensity levels at maximum – Sallow Moth’s second album is the perfect thing to point to the next time one of your Death Metal loving friends (and we all have at least one like this) complains that “they just don’t make ‘em like they used to.”

Because, let’s face it, they clearly do make ‘em like they used to, as practically every track on this album displays a nasty, old school flair reminiscent of classic Hypocrisy, along with a penchant for lacerating melodic leads and twisted progressive touches reminiscent of both early Dismember and prime-era Edge of Sanity (there’s a reason these three bands appear on the “similar artists” part of Sallow Moth’s Metal Archives page).

But, if this is your first time listening to this band, don’t go writing them off as just another early 90s tribute act.

For one thing, they’re much heavier (and, let me be clear, none of the three other bands I mentioned above were slouches in that department either), with “Seal of Promordium” in particular showcasing a level of chaotic-yet-calculated intensity (not to mention some truly bone-chewing, bile-gargling gutturals) that feels, and sounds, like the product of a much more modern mindset.

And, for another… well, for all their timeless, buzz-saw riffage, grinding, gargantuan grooves, and occasional bursts of blistering blastbeats (the one in “Phantasmal Sphere…” in particular is liable to take your head clean off if you’re not paying due attention), these songs go to some weird places at times (hell, the finale of the aforementioned track features a full on keyboard-solo freak-out).

Nowhere is this more obvious than during the climactic concluding pairing of “Birthing Pod, Chaos Orb, Mindslaver” and “Drowner of Secrets, Bring to Light” (BTW – if you really want to learn more and get the most out of this album, I’d recommend making the time to read about the underlying storyline, although it’s not mandatory, as it’s still a ripping Death Metal record either way).

“Birthing Pod…” is five minutes of metallic madness and moody menace which – as it switches back and forth between torrential blasts, creeping dissonance, and full-force fury – demonstrates in microcosm why Stasis Cocoon is far, far more than just another tribute to a bygone age, while “Drowner of Secrets…”, with its layers of shifting, shimmering synths, unorthodox, unpredictable structure, and sudden eruptions of esoteric extremity (not to mention some punishing moments of pure riffosity), manages the clever feat of sounding both strangely familiar and searingly fresh at the same time.

So mark my words, while it may be tempting to try and simplify any description of Stasis Cocoon by reducing it down to its component parts and essential elements, the truth is that the sound of Sallow Moth contains multitudes, and it’s the fusion of all of them, merged together at the DNA level, which makes this album more than just the mere sum of its parts.