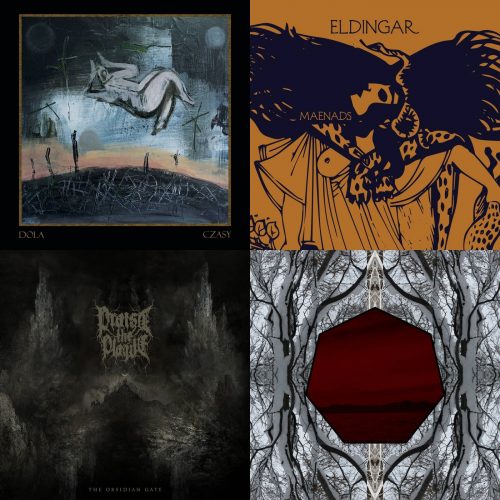 Just like the month before, July was absolutely packed with new releases, from bands both new and old, many of which we simply didn’t get around to devoting as much time and attention to as we might have wanted.

As a result, picking just four albums to write about for this article was a serious headache, only slightly alleviated by the fact that the big man himself (Islander, not god, though I’ll forgive you for confusing the two) has written a little something about several of the bands I was considering featuring here – Anatman, Codex Nero, Serpentrance – in the last week or two.

It still wasn’t an easy decision though and so, if I have time, I may end up doing a second one of these columns just to assuage my guilt over not having written about so many new and up-and-coming artists this last month.

In the meantime, however, please enjoy this distinctly blackened edition of “Things You May Have Missed”.

2021 certainly hasn’t been short on bands exploring the outer limits of (Black) Metal, with strange and spellbinding new releases from Grey Aura, Code, Hundred Headless Horsemen, and more, all staking their claim as some of the year’s most outlandish metallic morsels.

But it’s Poland’s Dola who may just have taken the proverbial cake with the unorthodox and unpredictable blend of Blackened Sludge, Drone-infused Doom, and proggy Psychedelia which makes up their new album, Czasy.

If you’re familiar with the band’s self-titled debut album from last year – although I won’t blame you if you aren’t, as it flew well under the radar for most people – you might think you know what to expect here. After all, those genre tags I’ve used above could equally be applied to that record as much as this one too. But while you wouldn’t necessarily be wrong, you also wouldn’t exactly be right either, as this is one album not afraid to take you to some strange new places.

What makes it really work, however, is the fact that this strangeness never feels forced or false. Indeed, there’s an uncanny sense of natural flow to the album’s wholly unnatural vibes, which is both a tribute to the band’s ambition – taking steps and taking chances with their sound that other group’s would probably balk at taking – and their impeccable execution of their unusual ideas.

Take opener “Wszystko odrośnie” for example. While it is, simultaneously, many things at once – soothing ambience giving way to brooding Doom, scorching Black Metal shifting seamlessly into moody melodic proggery – there’s always a guiding thread to follow, with the calm opening melody serving as the root for the subsequent edifice of massive, crashing chords, which in turn carry over to serve as the backbone of the song’s transition into more blackened territory… and so on.

Even at its outright weirdest – and there’s no denying that songs like “Kije” (whose mix of minimalist Prog-Jazz and groaning psycho-gloom would give both Imperial Triumphant and Oranssi Pazuzu fans an involuntary, if confusing, musical erection) and Acid-Doom odyssey “бога нет” are seriously weird – the album retains a consistency of sound and a clarity of vision which holds all its diverse influences and drifting ideas together.

It’s also, I must point out, just as fascinating when it’s letting things simmer as when it’s letting them blaze, as while closer “Nowa Jesień” may well be the album’s most impactful track due to the way it switches between eerie, off-kilter ambience and doomy, bad-trip belligerence, there’s also something truly captivating, in their own special way, about the jazzy Post-Metal strains of “-” and the moody acoustic soundscapes of “Przy ziemi” too.

So if you’re looking for a band who don’t so much “play by the rules” as they do “make them up as they go along”, then definitely give Czasy a spin. You’ll find it a dizzying experience, I’m sure.

It’s refreshing to see a band taking the ancient aphorism “know thyself” to heart so clearly. But, then, Eldingar are Greek, so you might say they have a slight advantage in that regard, being directly descended from so many great thinkers and philosophers and all.

Suffice it to say, then, that when the band themselves refer to their music as “Traditional Hellenic Black Metal for fans of Varathron, Necromantia and Rotting Christ” and make reference to their Folk, Thrash and Death Meta influences, it’s probably best to listen to them (in more ways than one).

In fact, listening to Maenads (named after the frenzied female followers of the god Dionysus, fact fans) is like discovering a relic of a long-lost age, mysteriously frozen in amber and preserved in pristine and perfect condition, which can – through the judicious application of modern technology – then be brought back to life in all its glory. And, yes, that was a subtle Jurassic Park reference.

And while this album definitely benefits from a meatier and more modern production job (as well it should), it still retains that same sense of seminal spirit and elemental exuberance which dates all the way back to the dawn of the Hellenic scene.

From the driving drums and dynamic riffs of opener “Maenads Crave” – whose mix of twisting tremolo, deathly stomp, and reckless, thrashy rhythms is underpinned by a potent, prominent bass presence – to the majestically melodic, morbidly metallic, strains of grandiose closer “Eyelids Heavy in the Storm”, via the haunting hooks and electrifying aggression of “Height of the Moon” and the brooding, intricate fretwork and visceral, emotive vocals of “Trauma”, this is the sort of album whose sound is best referred to as “ageless” or “classic”.

Don’t confuse the meaning of those words for “dated” or “derivative”, however. For while the roots of Maenads may extend back to an age where the genre boundaries weren’t so rigidly defined or policed, the very fact that it’s not beholden to modern definitions or expectations allows it a certain amount of paradoxical freedom, especially during a song like early highlight “Serenity’s Anger”, which sits proudly at a nexus point between Black Metal, Melodic Death Metal, and good old Heavy Metal, and practically revels in its hybrid identity.

One could argue, of course, that this record doesn’t truly offer anything new… but then no-one, not even Eldingar themselves, are trying to claim anything of the sort. Rather they’re simply making a concerted effort – whose blood and sweat shines through even during the albums’ various acoustic/atmospheric tracks, such as “Heights” or “Alpha Beta” – to pay tribute to the metallic majesty of a bygone era and perhaps, if we’re all very lucky, also help return it to its former glory.

PRAISE THE PLAGUE – THE OBSIDIAN GATE

Germany’s Praise the Plague are one of those bands who… just mean a lot to us here at NCS.

We got into them nice and early, and have been deeply in love with what they do (both on their underrated debut album and its equally underappreciated follow-up EP) ever since, and thus have been waiting (im)patiently to hear what this, their second full-length, was going to bring to the table.

Whereas Antagonist began with a grandiose, semi-orchestral prelude, leading into a rock-solid slab of buzzing, blackened groove, “The Descent” immediately lets you know that things are going to be different this time around, its bleak, foreboding opening soon blossoming into a doom-laden dirge of grim, gut-rumbling bass lines and colossal, hangman’s chords, whose fearsome density is shot through with bleak threads of malevolent melody.

And while the song does, eventually, erupt into a tormented torrent of blistering, brimstone-stained Black Metal and charred, chugging riffs, it still retains an overarching sense of impending doom and unending gloom which, ultimately, goes on to permeate and define the entire album.

There is absolutely no question, therefore, that The Obsidian Gate, is an altogether darker and doomier record than its predecessor, and while it hasn’t abandoned its blackened beginnings by any means – “Blackening Swarm II” is without a doubt one of the most ferocious yet malevolently melodic incantations of pitch-black magic you’re likely to hear all year – the increased focus on gigantic, tolling chords and gargantuan, rolling rhythms has only served to make Praise the Plague sound even heavier, and even more harrowing, as a result.

Of course the real magic is found in the liminal spaces, the shadowy places where the two sides of the band’s identity meet and merge. “Great Collapse”, for example, is a seamless fusion of sinister ambience, seething fury, and shuddering weight that firmly establishes the band’s harsher, heavier Blackened Doom sound, while colossal closer “The Ascent” is a crushing concoction of choking atmosphere and churning intensity designed to grind the listener down to dust over just over nine, nihilistic minutes.

Grim and gruesome and disgustingly groovesome, this album should do a lot to raise Praise the Plague’s profile on the Black/Doom scene, especially if this review has anything to say about it!

Released right at the end of the month, The Vulgar Wine is a short, sharp shock of punchy, punky Anti-Fascist Black Metal that also throws a bunch of different influences into the mix – a bit of Thrash here, a touch of Hardcore there, a tiny dose of Doom and a hefty helping of good old Trad Metal – to produce a shockingly flavourful, surprisingly visceral, vintage.

I’ll grant you, it’s not a perfect record, as there’s definitely a sense, at times, of the band simply throwing ideas at the wall and seeing what sticks (which, thankfully, is pretty much most of it), but their brash enthusiasm and sheer vitality more than makes up for the occasional songwriting stutter here and there.

“The Earth Is Blood and Gunpowder”, for example, moves from moody layers of melody to a stompy array of choppy riffs to a reckless, thrashy gallop to a ramshackle, blastbeat driven conclusion… steadily building in intensity as it goes… over the course of just under five frenetic minutes, while “Destra” sets a grimmer, more relentless pace right from the off, even as it continues to showcase the band’s love of punky, melodic riffage and lithe, limber bass lines.

The shamelessly catchy “Where Snakes Live” is all big hooks, bristling tremolo, and bombastic lead guitar, and sounds a little bit like I’d imagine Khemmis would if they ever decided to make a Black Metal album (right down to the proggy, synth-driven bridge), and leads the listener nicely into the even more vicious strains of “Double Sphinx at the Entrance”, which combines moody atmosphere and blistering aggression with lashings of lithe lead guitar work and swoops of grandiose organ to create one of the album’s best and brightest numbers.

And while the somewhat scatter-brained “Statue Radiating Equanimity” is probably the weakest of the “full” tracks here (not counting, obviously, the intro or instrumental closer “By Light of Candle”), it’s thankfully followed by another of the album’s various highlights in the form of the Blackened Speed-Punk meets gloomy Trad-Doom of “Freedom”, which finishes (well, almost) the record off in triumphantly “give no fucks” fashion.

Don’t get me wrong, there’s still a lot of room for improvement and refinement here, but it’s a very promising debut all the same, from a band who clearly know their metallic history, but who just as clearly aren’t going to let themselves be bound by tradition. One to keep an eye on, mark my words.

6 Responses to “THINGS YOU MAY HAVE MISSED (BUT SHOULDN’T)”