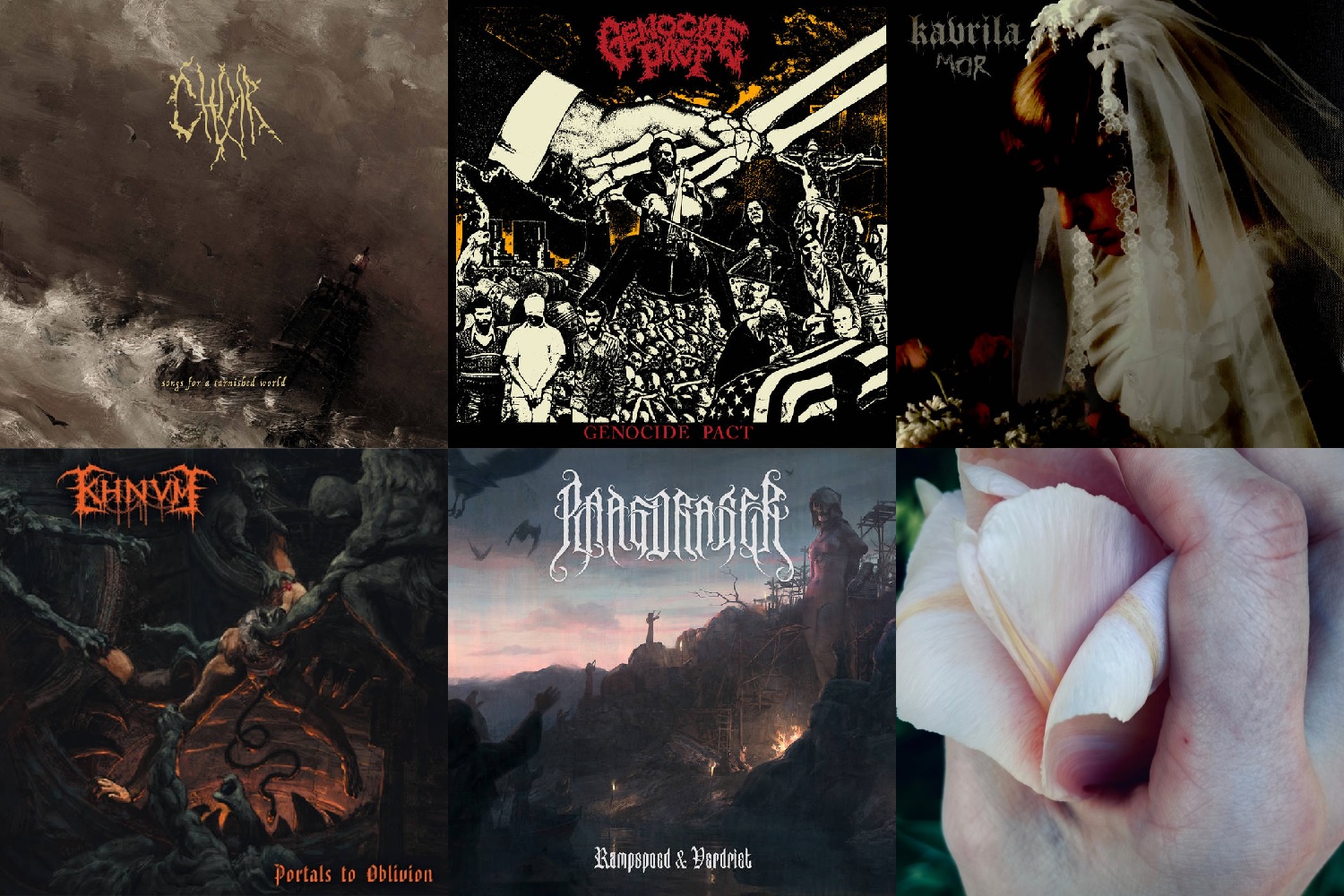 It won’t be long now until I’m fully immersed in “List Season”.

As a matter of fact, I plan to have my “Top Ten EPs” article published by Friday as a little taster of what sort of thing to expect throughout the whole of next week.

Until then, however, I’ve got just enough time to sneak in a few short, succinct reviews (we’re talking 100-200 words max.) about a few more albums that I really think more of our readers need to know about.

CHOIR – SONGS FOR A TARNISHED WORLD

This album is, in a word… soulcrushing.

Clocking in at just over forty-six minutes, and made up of seven sickeningly heavy slabs of devastating Blackened Doom, Songs for a Tarnished World is not an album for the faint of heart, or anyone with a sensitive disposition, but it is most definitely a monstrous piece of work that rightfully deserves your attention and acclaim.

From its grinding, gargantuan guitar sound to it cavernous, claustrophobic atmosphere, tracks like “The Shore Roars an Elegy” and “Mouths Trapped in Concrete” sit somewhere between the abrasive anguish of Body Void, the brutish aggression of Teitanblood, and the grim grandeur of The Ruins of Beverast, yet strike the ear with an ugly, uncompromising sound that stands firmly on its own two feet, despite this being the band’s relatively-unknown debut album.

Vicious and visceral and vile in every way, it’s also virulently catchy and almost violently compelling, and currently stands out as one of the most welcome, albeit horrific, new discoveries of the year for me.

There’s been a lot of good Death Metal released this year (and ain’t that an understatement!), especially of the more “Old School” influenced variety, and Washington, DC death-dealers Genocide Pact are here to add their name to the list, with a vengeance.

It’s a ballsy move to make your third album an eponymous release, as it raises certain expectations – namely that this will be the definitive record of your career so far – but blow me down if GC weren’t right to do so.

With an altogether crunchier, crustier, and arguably even more crushing sound than ever, the album mixes sluggish, Obituary-style stompers like “Led to Extinction” and “Purged Flesh” with snappier, grindier numbers like “Fossilized Futures” and (especially) “Deprive/Degrade”, in a way that’s somehow even angrier and more negative than ever (and it’s not like they were the happiest bunch of dudes in the first place).

It’s not a total paradigm shift, by any means, but if chunky, chug-driven Death Metal – with just a little bit of Punk/Grind/Hardcore influence – is your thing, then check this one out ASAP.

Blackened Punk Metal, anyone? That’s pretty much the best way I can think of to describe the second album from Germany’s Kavrila, which sounds like what you might get if you crossed the anxiety-inducing energy of early Refused with the snarling menace of The Great Deceiver and the sludgy, blackened vibe of Mantar.

Of course, these comparisons are really just a way of pointing you in the right general direction. The proof, as they say, is in the playing, and Kavrila prove themselves more than capable of kicking ass on their own terms with the opening “one-two” of “Watershed” and “Haflway Vanished”, whose frantic intensity, pounding percussion, and meaty riffs should instantly clue you in to whether this album is for you.

Despite its short-but-sweet length Mor still has its fair share of highlights and stand-outs, including the triple-hitter of “Tremor”, “Mor”, and “Flay”, which also showcase the record’s impressive variety – from hammering grooves to moody melody to almost Death Metal level heaviness – and its consistent quality.

So if you’re looking for a shot of pure auditory adrenaline (hell  the song “RIP” could pretty much wake the dead on its own) then give this one a listen.

The simplest way to describe KHNVM (whose previous album we also wrote about) would be “Blackened Immolation”.

But such a simplistic description would overlook all the subtle (and sometimes not-so-subtle) ways in which the band stamp their own identity on their bruising, brooding brand of Blackened Death Metal.

Sure, tracks like “Portals to Oblivion” and “Heretic Ascension” churn ‘n’ burn with a potent combination of lurching rhythms, writhing tremolo, and bone-rattling blastbeats, but they also show off the band’s impressive talent for crafting riffs that are both harsh and heavy and hellaciously hooky, while the dark and doom-laden “Drink from the Chalice of Suffering” and the brutally technical, Nile-esque “Baptized by the Father Befouled” help showcase the group’s deadly dynamic, which is capable of both extreme intensity and crushingly claustrophobic density… often within the same song (as in penultimate punisher “No Solace”, for example).

So while it may not break the mould, it’s certainly capable of breaking a few bones all on its own!

The debut album from Dutch trio Plaagdrager (“Plague Carrier”) is the sort of record whose virtues I don’t need to try all that hard to extol. One listen to it and you’ll know whether you love it or not.

From start to finish it’s all grim grooves and grimy riffs – think a more swaggering 1349 or a more purely Black Metal Horned Almighty… or even a more “musical” version of The Infernal Sea – topped off with a litany of spiteful, snarling vocals, erratic eruptions of blasting drums, and just the right amount of malevolent melody.

Of course, it’s more than just a carbon-copy of other, better-known bands (even if the thrashy riffs and epic vibes of “Kluizenaar” absolutely reek of early Immortal… in the best possible way), and the group have clearly put a lot of effort into establishing an identity for themselves, even at this early stage, whether that’s by giving the bass a little extra room to breathe and flex its muscles, or by lacing certain songs with some subtle but evocative clean vocals.

Long story short, this is one album that anyone with even the slightest interest in Black Metal should make time for.

SHEDFROMTHEBODY – TO HOLD THE RIPENED SUN

This is the second time we’re writing about Finland’s Shedfromthebody (aka Suvi Savikko) – after all, we are nothing if not loyal here at NCS – which means it’s another chance for our readers to embrace the artist’s bleak and brooding “Doomgaze” sound.

After having listened to this, and its predecessor A Dead and Aimless Hum, multiple times while preparing this review, it’s become clear to me that To Hold the Ripened Sun is the superior album in pretty much every respect.

That’s no slight on the former, by any means, it’s just that the latter manages to be simultaneously doomier and more intense (“We’ll Be Lifting Our Arms to the Sky in Joy and Wonder”, “Hours”) and moodier and more intimate (“The Hollowing of Girls”, “Shrines”), while also somehow being more consistent and coherent overall.

It’s also very difficult to pick out specific favourites – though the sinister slow burn of “In the Pines” and the heavy, haunting beauty of “Fascia” are definitely up there – simply because the album as a whole is so great.

Don’t skip this one just because it’s a little outside of your comfort zone. Because you’ll be missing out on something special.