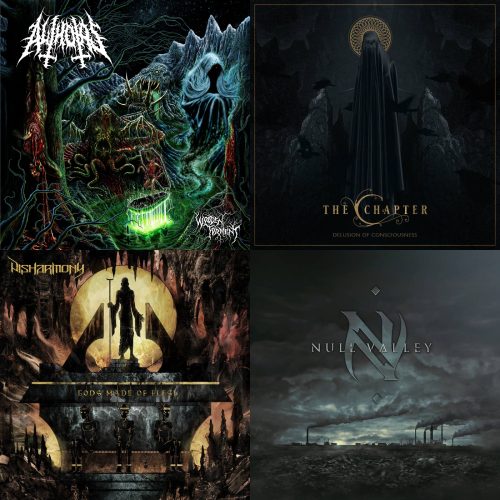 Ok, I promise I won’t make a habit of this, but I discovered so many new releases in April – records which seem to have been largely overlooked elsewhere, as far as I can tell – that I’m going to have to break up this edition of “Things you may have missed…” into two parts, the first coming today, the second coming… whenever I get chance to get around to it.

For today’s post I’ve chosen some ripping Black/Death from Canada (Althotas), some powerfully melodic Death/Doom from Portugal (The Chapter), some darkly dramatic Progressive Thrash from Greece (Disharmony) and some atmosphere heavy – as well as just plain heavy – Deathcore from the USA (Null Valley).

Chances are there’ll be at least something here you haven’t checked out before, so give them a spin if and when you get chance – you might just discover your favourite new band!

It makes sense that Althotas – whose music is a dirty hybrid of Black and Death Metal, all glued together with some spitefully thrashy vibes – named themselves after a Hypocrisy track, as there’s a lot of Hypocrisy in their sound… albeit, perhaps not in the way you’re probably thinking.

No, Wooden Torment clearly takes a lot of inspiration from the Penetralia/Osculum Obscenum days (back when Masse Brober, aka Emperor Magus Caligula, was the band’s vocalist) and, as such, has a darker, nastier, and altogether more “blackened” edge to it, sounding at times (such as during galloping opener “Boreal Death”) closer to bands like Sacramentum, Necrophobic, or (to pick a more modern example) Wormwitch.

And while the band’s sound does drift in a more Death Metal direction on tracks like “Empty Coffin” (whose gnarly riffs and liquid leads lend the whole track some serious early Hypocrisy/Dismember vibes) and “Tomb of Deliverance”, you’ll also find that there are some very Metallica-esque moments scattered here and there throughout the record (most notably during mid-album highlights “Malediction” and “Reborn to the Dark”).

Ultimately this is a hard album to pin down – it’s not quite “Blackened Death Metal” or “Blackened Thrash”, nor is it “Old-School Death Metal” or “Death-Thrash”, but a bubbling cauldron of all these elements (and more). But that’s ok, because while it may occasionally feel like a “too many cooks…” situation, on the whole Wooden Torment is a rip-roaring, riff-driven hell-ride through Extreme Metal history that doesn’t care what you call it, as long as you enjoy it.

THE CHAPTER – DELUSION OF CONSCIOUSNESS

Yep, that’s exactly what we have here, and while the music of The Chapter will no doubt appeal to fans of their more famous countrymen, their bold, bombastic guitar sound and gift for mournful lead melodies positions them more in line with bands like Swallow the Sun, In Mourning (especially vocally) and Daylight Dies.

Sure, it’s not the most original take on this particular sound you’ll ever hear, but when the songwriting is this good, and the emotional content so vivid – opener “Halocline” will immediately get stuck in your head, I guarantee you, while the heavy riffs and mournful, almost Katatonia-like vocal melodies of the title-track will have your head banging and your heart bleeding in equal measure – then that doesn’t seem so important… this is a damn good album on its own terms, and that’s all that really matters.

At just under forty-six minutes it also manages to pack a lot of different elements and ideas in without overstaying its welcome, and displays a good grasp of flow and dynamic as it progresses, moving from the pounding heaviness of “Compos Mentis” to the sombre, elegaic strains of “Sentidos a Morrer”, to the visceral emotional extremity of “Vultures”, to the undulating give-and-take of “In This Place”, before finally culminating in the climactic mini-epic “Social Solitude”.

Don’t miss out on this one. It’s a real dark horse of an album, and one I think a lot more people will (hopefully) be talking about by the end of the year if we all do our bit to spread the word a little!

DISHARMONY – GODS MADE OF FLESH

Let’s address the proverbial “elephant in the room” right away, shall we?

Yes, Greece’s Disharmony (who I was sadly unaware of until we hosted a premiere of “The Cynic and the Beggar”, the opening track from their new album, a few weeks ago) sound a lot like the legendary (and much-missed) Nevermore at times – although there’s also some noticeably Exodus/Testament inspired thrashy moments too during tracks like “Nogard” and “Desertion” – but that’s not a bad thing by any means.

Let’s face it, there’s not exactly a huge host of bands attempting to fill those particularly large shoes – only Shatter Messiah, Silver Talon, and Communic really spring to mind, though I’m sure there are others I’m just not thinking of – so anyone willing to make the attempt, and to do it this well, really should be celebrated.

It helps, of course, that Gods Made of Flesh kicks an inordinate amount of ass, with songs like the aforementioned “The Cynic and the Beggar”, the humongous “Cruel and bitter”, and the pounding “Trigger of Pleasure” delivering both some seriously heavy riffage and a plethora of soaring vocals hooks, as well as some impressive lead guitar pyrotechnics, in a way that will quickly make you forget about who or what these songs sound like and just enjoy the ride.

Sure, it could probably do with a couple of tracks being trimmed in order to tighten it up a little, but if there’s one track I definitely wouldn’t want to cut – not under any circumstances – it would be fantastic closer “L.I.F.E.”, which sees the band pushing both their technical talents and their songwriting skills (the riffs are bigger and bolder, the atmosphere is darker, the dynamic even more varied) just that little bit further, with the end result being not only the best song on the album but also one of my favourite songs of the year so far.

There’s been some really good – and obnoxiously heavy – Deathcore released this year, especially within the last month or so with bands like Hurakan and Wretched Tongues absolutely bringing the heat.

It’s Indiana’s Null Valley who really captured my attention though, their mix of utterly monstrous, down-tuned, down-tempo guitars (think Black Tongue, To The Grave, Humanity’s Last Breath) and oppressive, semi-industrial atmosphere (reminiscent of LLNN‘s back-breakingly heavy Post-Metal masterpiece Unmaker from last year) combining to create something which not only had an instant impact on me but which has stuck with me, lurking in the deep, dark depths of my hind-brain, ever since.

Obviously the primary draw of the band’s self-titled debut album is its ridiculous heaviness – something which is apparent right from the moment that gargantuan opener “Thought Is A Virus” kicks in properly – but there’s also some surprising subtlety at work underneath the album’s stunningly aggressive surface, with several tracks incorporating ominous voice-overs to help set the mood, as well as some bleak and brooding melody, while drummer Matt McGuyer’s performance behind the kit is both impressively technical  and perfectly primed and proportioned to bring out the best in each and every song.

So if you’re looking for Deathcore brimming with both stunning intensity and surprising intelligence – an album that doesn’t derive its power from bone-headed breakdowns but from the sheer, cohesive density of every member, every element, every instrument locking together into one merciless metallic machine – then crank this one up. Just maybe warn the neighbours before you do. They’ll thank you for it.