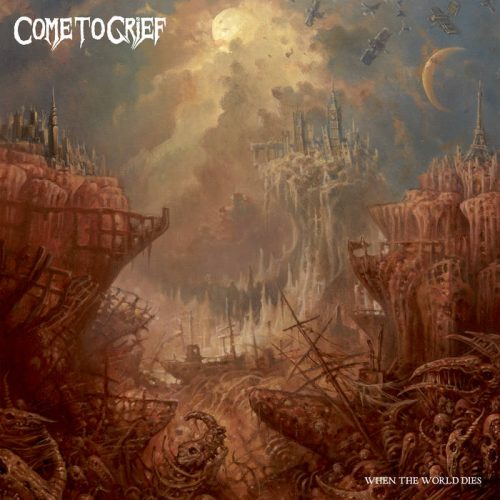 Do you know Grief?

I don’t mean that in the metaphorical, metaphysical sense of “have you experienced great sorrow and loss”, I’m talking about the band, whose four albums played a pivotal role in defining the unforgivingly brutal Sludge/Doom sound of the late 90s.

If you’re not familiar with their work, well, that’s partially our fault, as we haven’t really written about them very much (the fact that they formed, broke up, re-formed, and re-broke up all before this site even existed certainly doesn’t help) though we’ve certainly recognised and remarked upon the heavy (and I mean that in all senses of the word) influence they’ve had on many, many other bands we’ve written about over the years, including Hvrt, Mastiff, Body Void, and more.

I ask this because, as some of you might have guessed, Come to Grief is the new (well, not that new, they’ve been going since 2017) project by former Grief members Chuck Conlon (drums) and Tony Savastano (guitars), and while familiarity with their former band isn’t a pre-requisite to enjoying When the World Dies, it might help prepare you for the brutal barrage of bitterness and spite which you’re about to experience.

It’s telling that Come to Grief decided to name themselves after Grief‘s seminal 1994 debut album, as while the latter band got slower, darker, and – above all else – even doomier as they progressed, their early work was rooted in Hardcore (albeit the slowest, ugliest, sludgiest kind)… and that’s where When the World Dies picks up.

Don’t expect any bombastic, bouncy riffs or toe-tapping two-step parts though – this is venomous, volatile music for a venomous, volatile age, where groaning guitars grind out a dirge-like death-knell and shrieking, skull-splitting vocals spit forth volley after volley of pure, unadulterated aggression.

That’s not to say that the album is totally bereft of melody or nuance by any means, as the grimly hypnotic strains of “Scum Like You” and the bilious, brooding title-track demonstrate, with the former’s cathartic, Converge meets Celtic Frost vibes, and the latter’s eerily lucid leads and febrile, fret-wandering bass-lines, proving that Come to Grief have more up their collective sleeve than initially meets the eye (or ear).

How much of that is due to the contributions of vocalist/guitarist Jonathan Hébert and bassist Randy Larsen (who has since left the band and been replaced by Jon Morse) is unclear, but it’s to the band’s credit that they don’t just rely on simple nostalgia or a hankering back for “the glory days” and instead set out to make an impact, and leave their mark, on their own terms, and not anyone else’s.

And, let me tell you, tracks like the monstrously heavy “Devastation of Souls” (which finds the band channeling their inner Autopsy at times) and the unflinchingly savage “Bludgeon the Soul” (featuring the second of two throat-shredding guest appearances by one Jacob Bannon) are definitely going to leave a mark, if not an outright scar, on the listener, whether they like it or not.

Sure, When the World Dies may not massively break the mould/reinvent the wheel/shift the paradigm (delete as appropriate) but it’s still one of the grittiest, grisliest albums I’ve heard all year, one which doesn’t pull any punches or offer any compromise along the way.

And, really, what more could you ask for than that?

2 Responses to “COME TO GRIEF – WHEN THE WORLD DIES”