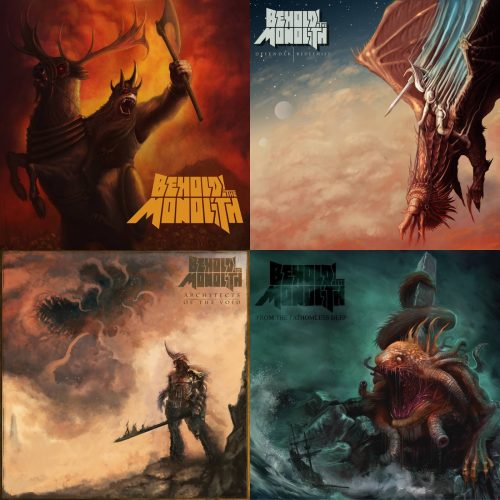 Recommended for fans of: High On Fire, Conan, Mastodon

The story of California riffmongers Behold! The Monolith is one of both tragedy and triumph

Tragedy… because, after releasing two well-received and well-rounded albums of increasingly proggy, doom-laden, sludgery, the band’s long-time bassist/vocalist Kevin McDade was killed in a car accident in 2013.

Triumph… because, after making the decision to carry on, the band roared back with another two fantastic records, the most recent of which was released just a few weeks ago.

One thing I particularly enjoy about these columns – and I hope you get much the same enjoyment out of reading them – is the opportunity to see and hear a band develop from their early, “larval”, stage to their final (or, at least, most recent) form.

Case in point, Behold! The Monolith‘s first album is a little more straightforward Stoner/Sludge than what their later work would develop into, but it’s not without its charms by any means.

The mix of Mastodon-y energy and Sabbath-esque swing which drives opener “Battlestagg”, for example, provides a bevy of instantly-engaging hooks and infectious riffs, along with some ear-catching bass-work and memorable melodic touches, that should instantly tell you whether or not this is a band you want to keep listening to (hint: you definitely should).

“Battle for Balls Deep”, by contrast (and despite its dumb title) is a touch more demanding, both due to its extended run-time and its embrace of a much doomier, and subtly psychedelic, delivery. But stick with it and you’ll be rewarded, especially during the track’s extended instrumental mid-section, which sees the group stepping away from the heaviness (though, don’t worry, there’s more of that to come) in order to explore a much more nuanced and melodically minimalist approach.

The big riffs and equally big hooks of “Elders” definitely owe a debt to Crowbar, but there’s a crispness and a catchiness to the music – from the rattling bass-lines to the subtle twin-guitar harmonies peppered throughout the track – which is all the trio’s own, while “Phantasma/Waking Life” pushes the band’s proggy, stoner side to the forefront for a while, letting the moody melodies and subtle psychedelia sit and simmer for a while before dropping some heavy, riff-shaped hammers in the song’s second half.

Culminating with the tripartite, twelve-minute long “Guardians of the Abyss / Primal Extenuation / Rise of the Brohemoth” – part indulgently progged-out instrumentation, part big, dumb, swaggering fun – Behold! The Monolith‘s self-titled debut album definitely doesn’t break the mould, but it definitely does put the band’s own stamp on it, and (as you’ll soon see/hear for yourselves) serves as a fantastic foundation for the group to build on going forwards. And, for that alone, it deserves not to be overlooked when it comes to digging deep into their back-catalogue.

The band’s second album simultaneously ups the progginess and the riffosity, beginning with the scene-setting instrumental introduction of “Guardian’s Procession” before diving headlong into the helter-skelter riffs and head-banging rhythms of the High On Fire inspired “Halv King”.

This is followed, in swift succession, by the staccato swagger and churning chug of “Desolizator”, which not only highlights both the added thickness of the album’s bass-presence and the increasingly aggro edge of the vocals but also finds time for an unexpected detour into eerie, almost “blackened” atmospherics in amongst all the doom-laden guitars and sludge-soaked grooves.

It’s “Redeemist”, however, which really showcases the more ambitious nature of this record, welding together massive Doom Metal riffs and passages of brooding, bass-driven Progressive Sludge, all topped off with some bombastic, bluesy fretwork and rough-hewn vocals hooks – as well as a dash of enigmatic, Opeth-esque acoustic guitar work and restrained clean vocals – into something that doesn’t sit neatly in any one particular box.

That doesn’t mean that the band have forgotten how to rock, however, as the “Matt Pike meets Metallica” Stoner-Thrash of “We Are the Worm” almost goes out of its way to prove (even if the group can’t resist throwing in some trippy melodies and atmospheric oddities towards the end). This is then followed by the outlandish mix of early Mastodon‘s twitchy technicality and mid-period Yob‘s weighty intensity that is “Witch Hunt Supreme”, which reminds you that, as fun as Behold! The Monolith can be, they’re also capable of putting out much more demanding material when they want to.

Case in point, penultimate epic “Cast on the Black/Lamentor/Guided by the Southern Cross” is just under fourteen minutes of doomy darkness, groovy grandiosity, and proggy instrumental intricacy that runs the gamut from the quietest to the loudest, from the softest to the heaviest, of the band’s entire repertoire thus far, after which the bombastic “Bull Collossi” ends the album not with a whimper but with a thunderous crescendo which seems tailor-made to have you salivating for what comes next… whenever and whatever that might be.

The band’s third album, their first following the untimely demise of founding member Kvin McDade, saw the reformed version of Behold! The Monolith – guitarist Matt Price and drummer Chase Manhattan now joined by bassist Jason Casanova and vocalist Jordan Nalley – picking up where the proggier feel of Defender, Redeemist left off (see the moody, majestic “Umbral Vale” for instant evidence of that) but also amping up the aggression levels even further.

The doomy, prowling intro of “Philosopher’s Blade”, for example, soon gives way to some seriously thick and meaty riffage, all topped off with a series of seriously visceral and venomous vocalisations, whose thrashy, borderline “blackened”, sound sits somewhere between High On Fire, Goatwhore, and latter-day Cobalt.

Don’t worry though, the song is still chock full of big, bombastic hooks and subtly shreddy leads, as is the more complex and creative “The Mithriditist”, which balances out its bone-grinding riffs and bowel-shaking grooves with an equally hearty helping of proggy passages, melancholy melodies, and cathartic clean vocals that those Mastodon boys would probably be more than happy to call their own.

While “Lord of Bones” starts off somewhat Yob-ish, it quickly descends into even darker, heavier realms – let’s call it “Doom-Thrash” for want of a better term – that puts the distorted density and antagonistic energy right at the forefront and right in your face, which makes the unsettling atmospheric interlude which follows a necessary breather before the twisted Black-Thrash meets Prog-Sludge assault of “Between Order and the Vistula” ups the ante even further by delivering some of the biggest riffs, sharpest hooks, and most rambunctious rhythms of the band’s career!

It all culminates in the fourteen minute finale that is the title track, whose early minutes are dominated by huge, doomy riffs and hoarse, semi-sung vocal hooks that are as intense as they are irresistible, followed by a bleak, brooding mid-section that allows for some much needed introspection (both for the band and the listener) before climaxing in a darkly majestic display of sludgy Prog-Doom which brings the whole thing to a suitably stunning crescendo.

The band’s fourth album (their first to feature new bassist/vocalist Menno Verbaten – also of Lightning Swords of Death) feels like the pay-off to all their long years of struggle and slow evolution, marrying together all the various different elements and influences they’ve experimented with and incorporated along the way into a singular whole which is – to use a hoary old cliché – greater than the sum of its parts.

Diving deep into Lovecraftian themes, it’s also the darkest record of the band’s career, one which occasionally even veers into Death Metal (or, at least, Death Metal adjacent) territory, the first signs of which are immediately apparent on ominous, doom-laden opener “Crown/The Immeasurable Void”, which blends grisly, grime-flecked vocals and dense, oppressive distortion with slithering, slime-soaked grooves (aided and abetted by Verbaten’s impressively intricate bass-work), uncanny, pseudo-psychedelic melodies and some majorly proggy vibes (especially in the song’s indulgently proggy second half).

“Psychlopean Dread” chugs and churns like the bastard child of Neurosis and Morbid Angel while also finding space for moments of minimalist melodic beauty along the way – managing somehow to be both the heaviest and the most delicate thing the band have written thus far – while the twisted progressive Death/Thrash hybrid that is “Spirit Walker” finds the band pushing their riffs and melodies in an altogether more cosmically-inclined direction not a million miles away from the likes of Execration or Blood Incantation, while still maintaining their signature sludgy edge.

By contrast, “This Wailing Blade” is all about hooks and groove, hitting the ears like a more radio-friendly version of High On Fire (and that’s no bad thing by any means), although it’s quickly eclipsed by the absolute monster that is “The Seams of Pangaea”, which is easily the weirdest and proggiest song on the album… and also one of the best, blending lurching riffs and lurid melodies with passages of undulating, uncanny calm.

Sticking with the band’s established tradition of saving the biggest (and, arguably, best) until right at or near the end, “Stormbreaker Suite” serves as a microcosm of the album – it’s doomy, it’s dramatic, it’s dynamic and sludgy, a little bit proggy, a little bit blackened, and not afraid to Thrash it up when it needs to, and ends with a sombre acoustic outro that practically guarantees you’re going to want to spin the album again sooner, rather than later. And all I can say is… trust that impulse.

One Response to “THE SYNN REPORT (PART 148): BEHOLD! THE MONOLITH”