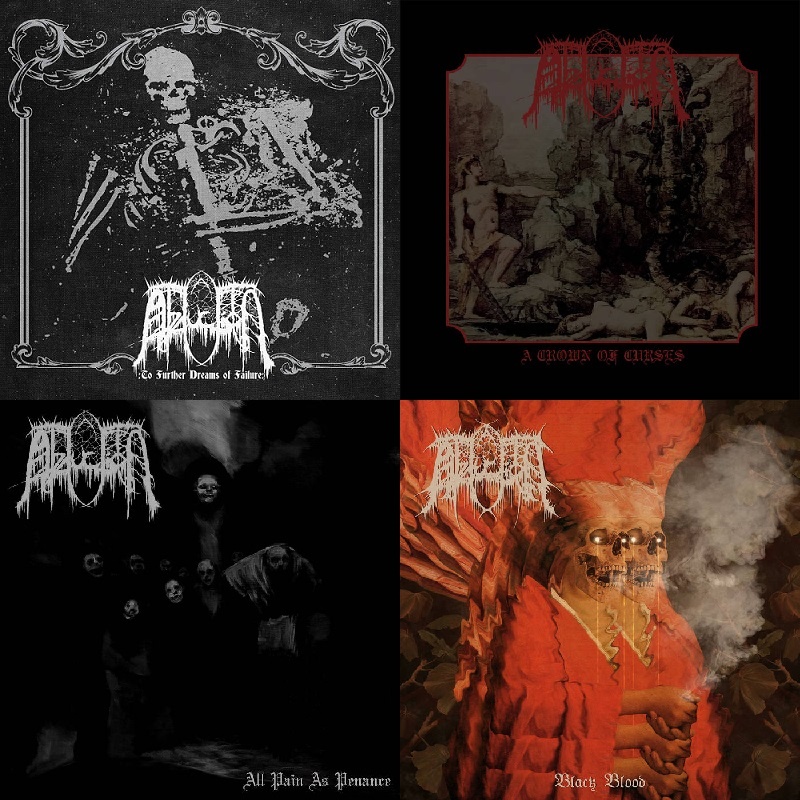 Recommended for fans of: Leviathan, Behexen, Blaze of Perdition

Who knows what day it is today?

That’s right, it’s Synn Report day, and this month I’m turning my attention to all four full-lengths (including their recently-released new album, Black Blood) by the Black Metal sorcerer who goes by the name Abduction.

The first Abduction album is, understandably, their most “primitive” (in some ways) – but that’s not necessarily a band thing.

After all, while it may lack some of the power and polish of the band’s later releases, the raw, almost impulsive, nature of the music – the sense of ragged spontaneity that makes much of the album feel like riding a frayed nerve – is part of what makes it so good.

While the opening bars give you some insight into the artist’s more ambient/atmospheric inclinations (with more of that to come) the song’s eventual eruption into a pyroclastic deluge of rattling drums, writhing guitars, and caustic, cadaverous vocals – interspersed with moments of dolorous, doom-laden chords and underpinned by a faint undercurrent of unsettling melody – demonstrates the vicious, volatile impetus and apoplectic intensity behind the album’s creation.

Speaking of intensity… “Miser Destructor” has a stripped-down savagery to it that borders on Grindcore at times, yet also finds time and space to explore some moodier and more melodic facets of the band’s sound (and all in just over three minutes) while “Usurper in the House of God” uses every second of its extended, eight-minute run-time to craft an oppressive, overarching atmosphere that’s as intense as it is immersive.

The album’s title-track wields dissonance and distortion like a reaper’s scythe, pendulous riffs carving out a series of massive, merciless grooves which – at key moments – burst into blistering, blast-driven motion, atop which an eerie amalgam of shrieking, crooning, and chanting vocals hold court.

Last, but by no means least, “Catacomb Chant” attempts (and mostly succeeds) to find a common ground between the more aggressive, blast-and-tremolo charged side of the bands’s sound – all sinister, sinuous melodies and spiralling percussion, each growing ever tighter and more entangled with every bar – and their dissonantly ambient, discordantly atmospheric, ambitions… and, in the process, sets the stage for the next phase of their evolution.

There’s no question in my mind that the band’s transformation on A Crown of Curses – simultaneously darker yet more infectious, more nuanced yet somehow even more extreme – is both natural evolution and a visceral mutation of their sound, one which builds on everything which came before it in new and striking ways.

Opener “Permissable Death”, for instance, instantly strikes the ears as tighter, catchier, and even more intense than anything from their first album (which is not criticism of their debut, by any means), with the venomous vocals, harrowing hooks, and subtly psychotropic melodies hitting a similar vein to Instinct Decay-era Nachtmystium.

“Reptilian Temple”, by contrast, gives more attention to the atmospheric elements, infusing the track with an eerie aura that permeates and penetrates it on a fundamental level, adding an extra sense of the strange and uncanny to the song’s cascading riffs and rippling, rough-textured torrent of blasting snare and splashing cymbals.

“Hastam Omne Verbum” (transl. “Every Word Is A Spear”) puts the guitars first and foremost – whether that means riding an electrifying tremolo run until exhaustion sets in, or settling into a grimy, gut-churning groove – and is all the better for it, but also gives the drums a chance to shine here and there as well (especially near the end, where the constant back-and-forth dynamic of the track suddenly opens out and loosens up, allowing the dark, almost doomy, melodic nature of the song to shine through).

It’s “Respiratory Prison”, however, which showcases the most ambition, the most willingness to break the mould, as not only is it the longest song on the album (indeed, it remains the longest Abduction song to date) but it’s also the one which showcases the greatest variety of aspects and facets of the band’s sound – with hints of almost Post-Black melody, passages of lurid, post-Leviathan ambience, a dash of DSBM-esque emotional anguish, and moments of brutal, almost Blackened Death Metal levels of aggression – all coiled and contorted around one another into one singularly dense ball of auditory agony.

It should be no surprise then that, after all that, Abduction opt for a temporary respite in the form of “Equinox of Defeat”, before the sonic scarification of “Paaliaq” – which begins life as a slow-burning conflagration of simmering malevolence which eventually ignites into a blazing barrage of discordantly melodic riffs and devastatingly intense blastbeats, before finally, climactically, burning out in a self-destructive spiral of harrowing shrieks and hypnotic rhythms.

It won’t be any surprise, if you’ve been paying attention so far, that Abduction have evolved even further on All Pain As Penance, but it might still be a bit of a shock how much bigger and nastier they sound on opener “Infinite Ancient Hexes”, which combines the manic intensity of a band like Merrimack (including some similarly maniacal vocals) with the grime-drenched grooves of Behexen, while still finding space in the mix for the band’s own particular brand of acid-laced melody.

“Ultra Terrestrial” only continues this trend, its oppressive opening ambience suddenly shattered by some of the biggest, most bombastic riffs of the band’s career, which in turn are swamped by tormented torrent of blastbeats, all leading into the arguably even more aggressive (seriously, some of those riffs are heavy) and definitely more progressive strains of “Convulsing at Baalbek”, whose mid-song transformation into something both more melodic and, dare I say, darkly majestic – replete with a rich, gloaming atmosphere – will probably still catch you unawares, even with this warning.

Both “Embattled” and “Prayer of Electrocution” then strip things down to their bare essentials – albeit in very different ways. The former focuses purely on the ambient side of the band’s sound, crafting probably the most effective (and eerie) soundscape of their career so far, while the latter is perhaps the most insidiously infectious, unashamedly anthemic, bit of pure Black Metal magic they’ve ever written (give it a listen if you don’t believe me).

With “Seven Apparitions of Suffering” the album then delves a little deeper into the desolately melodic, subtly DSBM influenced, side of the band’s sound, giving both the lilting leads and cosmic keys more room to shine – without, of course, neglecting the rough-hewn texture of the riffs or the propulsive power of the drums – after which the record reaches its climax with “The Funeral of Cosmic Mastery”, which not only ends things on a ridiculously high note (featuring as it does some of the tightest guitar work, moodiest melodies, and immersive atmospherics on the entire album) but also serves as a sign-post for the next stage of Abduction‘s ongoing evolution.

There’s absolutely no question in my mind that Abduction have never sounded as potent, or as polished, as they do on Black Blood, and while there’s a chance this might lose them some of their “kvlt” credibility (not that they’d care) they’ve more than made up for it in terms of the sheer power which this album displays.

“Kernos Crown” quickly makes this apparent, and should put any doubters in their place, with its thicker, meatier guitar tone and significantly more muscular bass presence (just feel that rattle in your bones), as well as an even tighter integration of the dissonant and melodic, aggressive and atmospheric, aspects of the band’s character.

And did I mention the hooks? Because Black Blood is absolutely full of them (the rolling rhythms of “Dismantling the Corpse of Demeter”, for example, are as irresistible as they are irredeemably evil).

That doesn’t mean, of course, that Abduction have “sold out” (whatever that is supposed to mean) – after all, the album’s centre-piece, “Plutonian Gate”, is an eleven minute epic of slow-burning ambience, intricate instrumentation, sinister grooves, and visceral, multi-variate vocals that reaches towards the same proggy, blackened heights as Venereal Dawn-era Dark Fortress or Blaze of Perdition circa Conscious Darkness – it’s more that they’ve tightened, refined, and condensed their sound into something that has the potential for a much bigger, and wider, impact without losing the essence of what made their earlier albums so good.

Fans of the doomier and more atmospheric end of the Black Metal spectrum won’t find themselves short-changed either, as “Lightless at the Grand Conjunction” delves even deeper into this side of the band’s sound, while also experimenting with some striking clean vocal textures (reminiscent of Ludicra at their best) which add a whole new (and intriguing) facet to the record.

Overall though, it’s not just the improved production and increased tightness that makes this album by far the band’s best work, but the stronger songwriting – such as the brilliantly arranged antagonism between grim grooves and haunting atmospherics, narcotic melodies and nihilistic vocals, which gives “A Psylacybic Death” such an addictive sense of tension throughout – which signifies this as a major step-up for Abduction.

Concluding with the absolutely furious (and phenomenal) “In Exaltation of the Supreme Being” – an almost eight-minute assault upon the senses, as mercilessly melodic as it is morbidly malevolent – Black Blood is the sort of album that should definitely put Abduction on the map, if they weren’t already there!

One Response to “THE SYNN REPORT (PART 151): ABDUCTION”