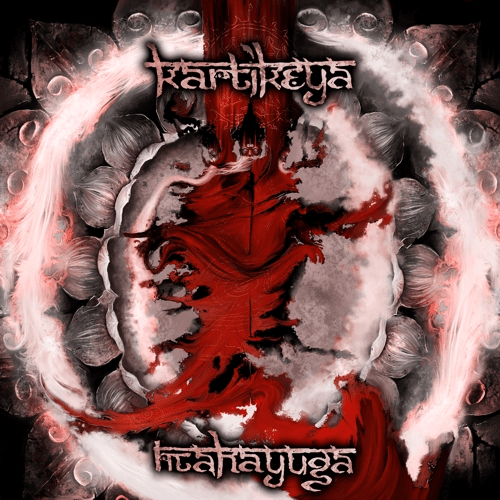 (NCS writer Israel Flanders provides not only his review of a fascinating new death-metal album from a Russian band called Kartikeya, but also — with the band’s permission — a special surprise at the end of the review.)

It’s very rare that I find death metal that’s TRULY note worthy and stands out to me much anymore.  The genre, especially in the so called “brutal” death metal tag, has gotten really stale to me, but I am always looking for new bands to capture my interest.  I went surfing for new music as per usual and happened to come across a gem of a band — Moscow’s Kartikeya, and we’re here to check out their second album Mahayuga.

Kartikeya is a rather strange beast in this era of excessive blast beats and musically fraudulent technical wank. Imagine the speed, symphonics, and intensity of The Monolith Deathcult and the progressive nature and melodic sense of Ihsahn, and throw in fully inclusive Indian folk elements, and you have Kartikeya. There is a lot of fun to be had on this album, what with its catchy riffing, its full-frontal brutality assault on the senses, the Indian atmosphere and vibe, and the superb melodic moments when they spring up.

The album opens with the instrumental “Sarga Manvalem”, beginning with some nice eastern ambiance before breaking into a riff and a melody that will remind you of former Israeli black metallers Melechesh and an imperial war march of double bass and low-tuned brutal droning. I like how this introduces the album, as the intensity of it continues building until we hit an Indian chant section that comes out of nowhere and throws you off balance. (more after the jump . . .) END_OF_DOCUMENT_TOKEN_TO_BE_REPLACED