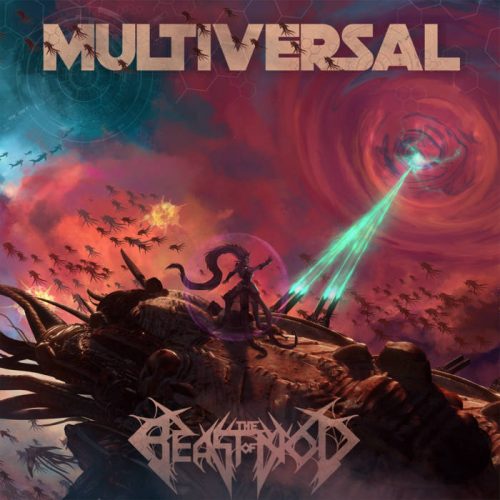 (Andy Synn ventures forth once more into the multiverse of madness to experience the kaleidoscopic thrills and spills of The Beast of Nod, whose new album is out tomorrow in all known dimensions)

One thing I absolutely hate, with the burning passion of a thousand exploding suns, is parody bands.

They’re (almost) never funny, nowhere near as clever as they think they are, and generally just rely on lazy, lowest-common-denominator tropes to get by. Hell, even the best of them barely rise above the level of “children’s entertainers with guitars” a lot of the time.

Don’t get me wrong, I’m not against bands having fun (as I hope to demonstrate with this review), nor am I ignorant of the fact that, well, Metal (particularly the more OTT and “extreme” forms we all know and love so well) is, frankly… a little bit ridiculous.

I mean, c’mon, a significant number of bands spend most of their time trying out “out-gore” one another with ever more biologically implausible (and borderline indecipherable) lyrics, while another extremely large contingent likes to rant about the evils of organised religion while dressed up like undead wizards!

With that in mind, then, there’s definitely something to be said for bands who, while still taking their craft seriously, are fully aware of the genre’s inherent absurdity (but, then, isn’t all life absurd, really, when you get right down to it?) and don’t try and shy away from it or act like they’re ashamed of it but, instead, choose to openly embrace it in all its shameless, everything-turned-up-to-eleven excess.

And if there was ever a band who exemplified the preposterous potential of Metal, not as a weakness but as a virtue, then it’s those shameless sci-fi Tech-Death troubadours who call themselves The Beast of Nod.