Last night was Thanksgiving Eve. (That doesn’t roll off the tongue quite like Christmas Eve or New Year’s Eve, does it?).  And our buds over at Seattle’s Showbox in the Market decided to host a night of live metal to commemorate the occasion — the “Into the Mouth of Hell We Tour” show, making its first stop back in the U.S. after a series of dates in Canada. The NCS triumvirate were all in attendance, and here are some notes from Nov 25, 2009, at The Showbox:

This band, the latest project of Shaun Glass (ex-Broken Hope and Soil), dropped their first CD in September (“Force Fed Lies”).  Their MySpace page proclaims that “Dirge Within is definitely not a cookie-cutter metal band,” but that’s exactly what they are, and they’re even worse live than on CD.  Completely formulaic, forgettable metalcore (and not even much “core”).  Too many emo haircuts and too much self-conscious synchronized headbanging, bouncing, and guitar swinging.  The kind of stage antics that look like they were practiced in front of a mirror.  And talk about pandering to the crowd:  “It’s a fucking honor to be playing back in the United States of America!”  Off-key clean singing from frontman Jerms Genske mixed with only average gutterals.  The rest of the band is more than competent in their playing, but what they’re playing is completely unoriginal.  (Contemporaneous reactions from your other two Authors:  Alexis looked bored and slightly disgusted.  IntoTheDarkness summed up as follows:  “They were bad.  Not terrible, but bad.”)

A refreshing change from the opening act.  Classic, no-bullshit, brutal deathcore from one of the founders and popularizers of the genre.  These guys from Tennessee have really upped their live game since we saw em in Seattle for the first time a couple years ago at El Corazon.  Great technical playing, great stage presence, lots of attitude and energy, and Phil Bozeman’s gut-rumbling death growls are awesome.  Kudos also due for the shout-out Bozeman gave to our local favorites from I Declare War, all of whom were at the show.  But the crowd (apparently dominated by Trivium fans) was disappointingly docile.  First decent pit of the night didn’t happen til Whitechapel’s last song, though it started with an honest-to-god wall of death. Whitechapel left it all on the field and deserved better.  (Contemporaneous reactions from your other two Authors:  IntoTheDarkness:  “The crowd friggin sucks balls.  They didn’t do anything! . . . Bozeman’s got good taste.  He’s wearing a Suffocation shirt.  He knows where he came from.”  Alexis:  “I liked em!”)

Interlude of weirdness:  after Whitechapel took care of business, the house DJ immediately put on Rammstein’s “Pussy.”  Kind of a jarring contrast. 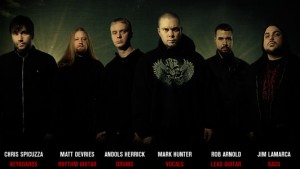 Two words:  Fucking.  Awesome.  Technology being what it is, almost anyone can sound good on a recording.  The cream rises to the top on stage, and Chimaira delivers a killer live experience. Totally tight, in-sync, powerful. Blasting off with “The Venom Inside” and “Resurrection,” followed by “Power Trip,” “Empire,” “The Disappearing Sun,” “Severed,” “Nothing Remains,” and “Pure Hatred.” The crowd livened up noticeably during this set.  Kind of cool to see all those Trivium fans screaming “I hate everyone!” along with Mark Hunter in the last song.  Hunter sounded fucking great and he has matured into a dominating, charismatic stage presence.  The rest of the band knows their shit too.  Can’t wait to see em again.  (Contemporaneous reactions from your other two Authors:  big smiles and lots of headbanging.)

You didn’t really think we’d stay for Trivium, did you?