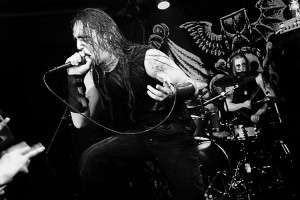 The day job has had my head in a fucking vise for the last week but now that’s passed. To celebrate last night, I had a few adult beverages with a couple of buds and then some total immersion in Wormwood, the latest offering from Swedish black metal band Marduk. You know what I mean about total immersion. Get either semi- or completely wasted, get comfortable on the floor in a chair or bed, crank up the volume past NIOSH limits, close your eyes, and then just focus your brain on the music. Well, Wormwood turned out to be just what the doctor ordered — if your doctor’s last name happens to be Frankenstein or Faustus. 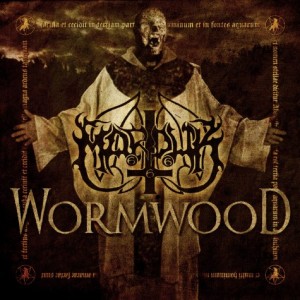 Wormwood has been out since October 13, and it’s already making lots of “Best of 2009” lists that metal critics have been generating.  But I’m still wading through my backlog of new releases from this fall and Marduk wasn’t a top priority. I confess: I’ve been a slow convert to black metal. Most of it just doesn’t hit me in the right spot. But Wormwood is some powerful shit. Most of the album is fast, bludgeoning mayhem — blastbeats galore, thick basslines, and a buzzing, swirling guitar sound that winds a cord around your neck. And the overall mood is frightening, ominous, evil.

Much of that mood is traceable to the truly astounding vocals of current frontman Daniel “Mortuus” Rosten. Words are not going to do justice to the sounds he produces on Wormwood.  Imagine a blending of the agony of the damned in the deepest pit of Hell and the wolfish howling of their demonic torturers, rolled into one cacophony of despair and dread. I have no idea what words this dude is singing, and I really, really don’t want to know. But his vocal delivery meshed together with the crushing instrumentation creates a truly overwhelming experience that just transports you into a very different place.

It’s not a place I want to visit for very long. I’m pretty sure that a steady diet of this stuff would convert my brain into a quivering porridge.  You’ve read about SWAT teams that have cornered some suspected killer in a house and blast loud music in an effort to force surrender without gunplay? Wormwood could be the sonic weapon of last resort. Forget about surrender.  The cornered mutha would eventually just cap himself.

Credit where credit is due:  The excellent photo at the top of this post comes from Diana Lee Zadlo and her portfolio of shots from the ongoing Marduk-Merrimack-Nachtmystium tour, which my day job prevented me from seeing when it stopped in Seattle (big bummer).  To see more of Ms. Zadio’s killer images from that tour, go here.

And speaking of images, the video below has been making the rounds on the interwebs.  At the 1:16 mark, you’ll see some poor wasted-looking fucker get up on stage and try to give Marduk frontman Mortuus a friendly hug — and then get body-slammed, WWF-style, for his trouble. It’s pretty shocking and pretty ugly to watch. Goes with the Marduk territory I guess.