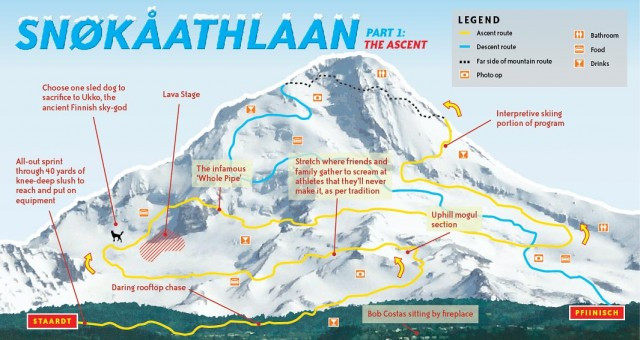 Are you planning to watch any of the Winter Olympics on TV? If you are, do you plan to mute your TV and listen to extreme metal instead of those annoying TV commentators? What do you think would be the most appropriate metal accompaniment for Winter Olympic events? Yeah, we thought the same thing: Viking metal.

But are any of the Winter Olympic events really metal? Biathlon comes close. People ski really fast cross-country and periodically have to stop and blast away with rifles at tiny little targets. Skeleton also comes close — you lie on your stomach atop a small, rickety-looking contraption and race face-first down a course at about 100 miles an hour.

But none of the official events is as metal as the one invented by The Onion: Snøkåathlaan

In typical fashion, The Onion provides all sorts of history and detail about Snøkåathlaan, including trail maps like the one above and the one we’ll show you after the jump, plus features on some “Snøkåathlletes To Watch.”  For example:

SNØRRI SNØRRISSON (SWEDEN): This intimidating competitor is unparalleled on the steeper slopes, is the best axman in the event, once fashioned a sled from the rib cage of his extra dog and, according to Norse naming conventions, is his own father

PYOTR “THE CANNIBAL” GLADKOVSKY (RUSSIA): One of the last Cold War-era Olympians and a true survivor, Gladkovsky’s only weakness is a tendency to gain weight proportional to the number of men who go missing in a given race

The description of what the sport actually consists of is a bit vague, but here’s what we’ve pieced together so far (after the jump . . .) 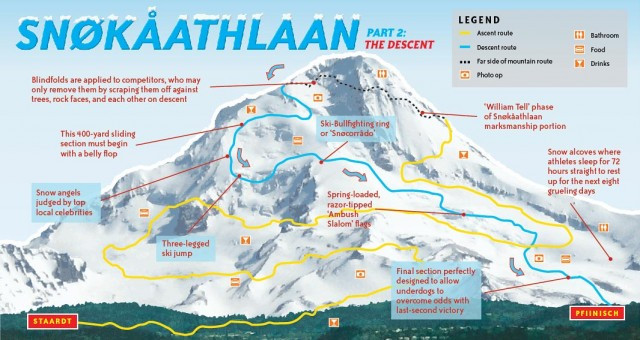 The equipment appears to consist of skis, ski poles (as long as they don’t unscrew to reveal hidden swords), guns (but no hollow-point ammo), aluminum bats, trip wires, and sled dogs. Optional qualifications for participants include being convicted for crimes they did not commit and offered the choice between the Snøkåathlaan and a lifetime in the Danish foreign legion.

Race rules are as follows:

RACE: Begins with standing start; starter calls first “ready,” “set,” waits from two seconds to an hour; then discharges a pistol, usually into the air. Deviations from the course will result in disqualification unless they turn out to be faster. In the event that a sled dog returns to the wild, snøkåathlletes must gaze after the animal until it takes one poignant look back. During marksmanship rounds, competitors must not fire until fired upon. Dangling from helicopter must be done with one hand while also trying to save the girl. For each mogul, fruit stand, ski jump ramp, flaming hoop, or slalom gate missed, 10 seconds will be added to total elapsed time. Competitors finishing with times of more than 13 minutes will be disqualified.

This all seems pretty fucking metal to us, and a helluva lot more interesting than figure skating or curling. We’d watch a lot more Olympics if surviving the events was more important to the contestants than medaling and if the losers were buried with full honors on the race course itself.

All Snøkåathlaan needs is a fitting soundtrack. Something like this:

Amon Amarth: The Pursuit of Vikings

[UPDATE: We wrote this post before learning about the death of luger Nodar Kumaritashvili in a practice run on the luge course.]