So when that stellar line-up took the stage at El Corazon on the night of March 9, all three of your NCS Co-Authors and our entourage were there to bear witness to the awesomeness, and we now file this report, along with a few photos (for which we apologize, because we forgot to bring the good camera and used a borrowed camera that hadn’t been charged and ran out of juice and, well, shit happens).  (read on after the jump . . .) 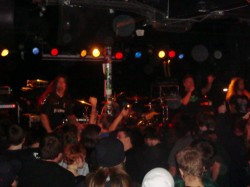 This death/thrash metal band from Denmark released their sixth album (To the Nines) last year, and we really liked what we heard (particularly a song with one of the most inspired titles of the year — “Cloaked in Shit”). But we were wondering what we’d hear at El C, because vocalist “Joller” Albrechtsen left the band in February. In his absence, HateSphere recruited a dude named Morten “Kruge” Madsen (from Danish band Mevadio) as a temporary replacement on this tour.

The sound is definitely different, because Madsen’s harsh vocals are in a higher range than Albrechtsen’s, and that tended to enhance the thrash metal sound of the music and deemphasize the death metal sound. But it was all good because these dudes really know how to thrash.

It was chug city from the starting gate and it took all of one song to kick the mosh pit into gear. What followed was one convulsively headbanging piece of riffery after another, played with obvious enthusiasm and joy.  These guys can’t help but smile when they play, and their sense of fun is infectious.  We missed Albrechtsen’s vocal delivery, but Madsen was a lively, likable presence on stage and clearly was into what he was doing.  A great way to start the night! 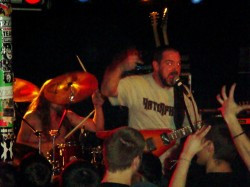 This technical death metal band from Montreal produced one of the most fascinating albums of 2009. Fragmentary Evidence was a cerebral bit of tech-death craziness played with tremendous skill, and we got into it big-time.

Augury also suffered some personnel changes since that album was recorded, losing their drummer in November and their bass player in February. So, like HateSphere, they’re now touring with temporary replacements (Tommy McKinnon on drums, Christian Pacaud on bass). On top of that, Fragmentary Evidence featured seven guest vocalists who obviously weren’t along for this ride — so again, we wondered what we would be hearing from the stage.

And again, it was all good. Just off-the-hook math-metal craziness, with rapid, no-warning tempo shifts, layered rhythms, atonal dual guitar soloing, and lots of fingers flying up and down the frets (and we’re talking about the fingers of both hands of both the guitarists and the bassist).

The vocals were quite capable, too. Patrick Loisel is a very interesting dude — an over-40 history and science teacher, a student of extreme music, and a guy who clearly marches to the beat of his own drummer. (To see what we mean, read this interview.) His vocals were as all over the place as the music — rapidly veering from ultra-deep death gutturals to high-end shrieking to mid-range rasping. And on the last song, somehow, he and co-guitarist Mathieu Marcotte made their guitars sound like squeezeboxes and strings.

Who knew this kind of generally non-headbanging complexity would produce such a reaction in the pit — but it sure did: a definite up-tick in the level and violence of the activity from an extremely packed floor. 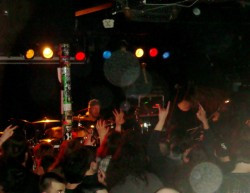 This is German super-group Obscura’s second U.S. tour following the 2009 release of their sophomore album, Cosmogenesis, and their first following Relapse Records‘ February re-release of their debut LP, Retribution. What more can be said about Cosmogenesis that hasn’t been said before? It was hands-down one of the best albums of last year — a mind-blowing classic of inventive technical death metal. Man, were we stoked to see these German mind-benders in the flesh!

If you’ve listened to Cosmogenesis, you know that the music involves highly technical instrumental skills, with rapid time-signature shifts and instant segues from furious pummeling into sublime melodic solos that require the ability to stop and turn on a dime. We were intrigued to see whether the awesomeness of the studio work could be replicated on stage. The answer is a resounding “Yes!”

This is truly an amazing group of musicians. Their performance was technically immaculate, and they poured themselves heart and soul into their playing. Guitarist Christian Muenzner (ex-Necrophagist) has rightly been praised for his shredding talents, but vocalist/guitarist Steffen Kummerer is an impressive guitarist in his own right, playing the leads on many of the set’s melodic solos with aplomb.

And that rhythm section — holy shit, was it completely off the hook! Jeroen Paul Thesseling (ex-Pestilence) is a marvel on his six-string bass and drummer Hannes Grossmann (also ex-Necrophagist) is as good as any drummer we’ve seen or heard — inventive, sharp as a knife, and inhumanly nimble and fast. Of all these talented dudes, he was the one we stared at the most, with slack-jawed admiration.

In a nutshell, one of the best live sets by any band we’ve seen in years. 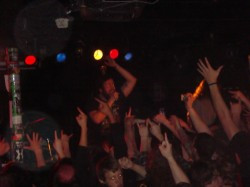 And finally, we come to those death metal party animals, the Pride of Detwat — Black Dahlia Murder. BDM also released an awesome new album in 2009 – Deflorate. And man what a live act these dudes put on! The last time we saw them in Seattle (Sept 2008), it was a bigger venue and they were supporting Children of Bodom. That gave us some idea of what to expect, but it really didn’t prepare us for what happened in the more intimate confines of El Corazon, where there’s zero separation between stage and floor except a few feet of height.

It was just wall-to-wall mayhem from the first blast beats of the first song.  We’ve been going to El Corazon for years, and really can’t remember seeing a crowd reaction this intense and this prolonged.

The house was completely packed by this point, and basically the entire floor turned into one roiling pit from start to finish, like a school of piranhas with a haunch of meat tossed in their midst. And the crowd-surfing and stage-diving never let up either. It was like the gymnastics event at the Death Metal Olympics.

As one of my Co-Authors said at one point, “Did everyone but us decide to go outside and smoke crack at the last break?”

And up there on-stage was frontman Trevor Strnad, bouncing his meaty, half-naked self from one side to the next, conducting the insanity with one hand while alternately growling and shrieking into the mike held by the other, all the while artfully dodging the flying bodies — with a huge fucking smile on his face. (And he even allowed one blonde chick to give him a big hug in mid-song without going Karate Kid on her.)

The band played a delicious combination of old and new songs, cranking out their high-energy brand of brutal death metal, melodic death metal, and thrash. The instrumental performances were tight as could be, and Ryan Knight’s guitar solos particularly stood out. That dude can flat-out shred.

Don’t know how to end this post other than by sending this message out to all four bands:  Come back soon! These bands are living proof of just how much unadulterated fun live extreme metal can be.