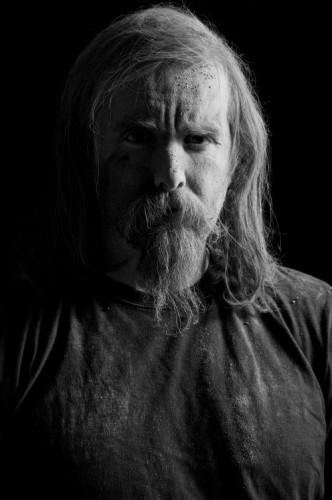 Are these two items related to each other? Well, not actually, though pairing them in the title to this post seemed like an eye-catchingly good idea. Do they both relate to extreme metal? Uh, not actually. What the fuck, we fudged a bit. So sue us. Actually, don’t sue us. Read these bits instead, which include our always-incisive commentary (after the jump . . .)

In our continued reading to become better educated about black metal, Varg Vikernes is one of those people whose name pops up all the fucking time. He’s been called (by director Sam Dunn in the film Metal: A Headbanger’s Journey)  “the most notorious metal musician of all time.” If the name means nothing to you, here’s a drive-by recap of Varg’s life in one paragraph: 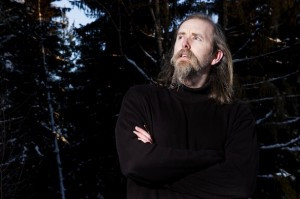 Norwegian black metal musician; member of Mayhem from ’92 – ’94; recorded four albums from ’92 – ’93 as a solo project under the name Burzum; convicted in ’94 of murdering his Mayhem bandmate Euronymous and of burning churches; paroled in 2009 after serving 16 years of a 21-year sentence; at one time expressed support for “nazism” and has embraced racism and eugenics, but claims that he hates no one; now embraces a “modern scientific worldview resting on a foundation made up of the Pagan values and ideals: loyalty, wisdom, courage, love, discipline, honesty, intelligence, beauty, responsibility, health and strength.”

Varg is way, way the fuck over on the grymm end of the extreme metal fun scale. Frankly, we wouldn’t pay any attention to what the guy says these days except for the fact that he has a new Burzum album (Belus) scheduled for release on March 23, and it’s drawing praise from some respected sources (e.g., here). So, when we stumbled on Brandon Stosuy’s interview of Varg at Stereogum.com, we took time to read it. A few excerpts follow:

STEREOGUM: You’ve said you’re not interested in the contemporary Norwegian black metal scene (outside of Darkthrone). Or black metal in general: “Black metal is not a label I use for my music any longer.” Why not? What should it be labeled instead?

VARG VIKERNES: My main problem with Norwegian Black Metal is that almost all the bands from 1992-1993 are made up of rats, who ratted each other out and blamed me for everything that went wrong in the scene. I really don’t want to be associated with them in any way. I should stress that neither the guys in Darkthrone nor the guys in Mayhem ratted anybody out, but pretty much everyone else did. Emperor. Enslaved. Immortal. Hades Almighty et cetera. These guys are fucking rats, or they play in bands with rats – which is not much better!

Further, I really don’t want to be associated with the low-brow Black Metal genre. If you want to know what I mean when I say that just have a look at an Immortal video on YouTube or something. It’s so dumb I don’t know what to say, really, and it’s so ridicules (sic) we can barely tell the difference between the real stuff and the parodies.

STEREOGUM: How do you feel about having gay fans? Black fans? Jewish fans? Christian fans? Do you feel that you’ve failed to transmit your message properly if people who aren’t from your white/Nordic/heterosexual/pagan demographic feel something in the
music that isn’t tied to shared membership in that demographic? Does it mean the music has failed to transmit its message properly?

VARG VIKERNES: And what is my message? When did Burzum ever address political/racial matters? I don’t think Burzum has ever even addressed religious matters, other than describing different European myths. Burzum is not a political or religious band, or even an anti-religious band. Burzum is music; art if you like, and the interpretation of art lies in the eye of the beholder. I might be Nordic, heterosexual and have a Pagan ideology myself, but why would I expect the fans of my music to be just like me?

I am a narrow-minded ultra-conservative anti-religious misanthropic and arrogant bigot, alright, and I have a problem with just about everything and everyone in this world, but I am not demented, and if those who are not like me are able to enjoy my music that is all fine by me. Be a Christian-born black gay feminist converted to Judaism for all I care, or worse; a Muslim. Just stay off my lawn… [Editor: Varg put a smiley face here in his original interview answer]

Oh, and I may add that I have a problem with most Nordic heterosexuals with a Pagan ideology as well.

Incisive NCS Commentary: First, we now have it from an “unimpeachable” source: The members of all the legendary Norwegian black metal bands from the 90s except for Darkthrone and Mayhem are a bunch of fucking rats! Or maybe Varg is just a tad bitter. We’d guess that spending the last decade and a half in stir while all the other BM luminaries were having a high old time might do that to you.

Second, the dude is dead right about that Immortal video: It’s laugh-out-loud ridiculous — which is kinda the opposite of grymm. But our curiosity has been peaked: What would “high-brow Black Metal” be?

Third, he actually seems to be poking fun at himself — just a little, there at the end, after the “stay off my lawn” quip. Maybe he’s not as grymm as he used to be. Maybe a decade and a half in stir mellowed him out. In any event, it’s hard not to agree with his self-assessment: A “narrow-minded ultra-conservative anti-religious misanthropic and arrogant bigot.”

Still, despite every politically correct bone in my body, I can’t help but be curious about what kind of music a dude like this will make after a decade and a half in prison. And so I’m gonna listen to Belus when I can. Maybe we’ll write about it. 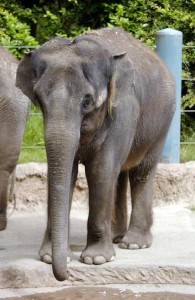 Be honest now. You’d stop and read that story, wouldn’t you? I certainly did. Here are a few excerpts:

A 31-year-old Asian elephant at the Woodland Park Zoo was artificially inseminated this week in hopes of creating a “multigenerational herd,” zoo officials said Thursday.

Chai — whose popular 6-year-old calf, Hansa, died in 2007 from an elephant herpes virus — was inseminated first on Wednesday and again on Thursday, after she showed signs of ovulating, said Nancy Hawkes, the zoo’s general curator. . . . The sperm — described by Hawkes as “robust and nice-looking” — came from a 12-year-old bull named Samson, who lives at the Albuquerque Biological Park. . . .

The two 20-minute procedures were carried out by zoo staff and a visiting veterinarian. Chai was first put in an “elephant restraint device,” which involves chains placed around the ankles to keep her from moving side to side, Hawkes said.

She was not sedated, but to make sure she stayed calm, her keepers fed her copious amounts of apples, cantaloupes, carrots and sweet potatoes, Hawkes said.

One of the challenges, she added, is that an elephant’s reproductive tract is nearly 10 feet from her outer opening. A probe with a long, skinny tube — as well as a tiny camera — helped guide the team in delivering the sperm. . . .

Alyne Fortgang, co-founder of Friends of the Woodland Park Zoo Elephants, said Thursday that Chai’s insemination is “an absolute tragedy.” “Keeping elephants in captivity and breeding them is so abnormal,” she said. “It kills them prematurely.” 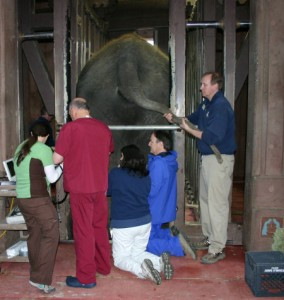 Incisive NCS Commentary: Elephants aren’t people. I get that. And I don’t know what elephants think or feel — and neither do the abysmal fucks at the Woodland Park Zoo. Maybe if elephants could think like you or me and had a choice, they’d think living in zoos is the shit. But I kinda doubt it.

And I really doubt they’d think it was cool to be raped (twice) with a 10-foot long probe while chained at the ankles, no matter how “robust and nice looking” the sperm is and no matter how many fucking sweet potatoes got shoved into their mouths at the same time — just so a new generation of paying yokels will have a new generation of elephants in captivity to stare at.

I’m sure Ms. Hawkes and her cohorts at the Woodland Park Zoo can rationalize this in a dozen different ways — all of which would be self-serving bullshit. Seriously, I don’t think you have to be a card-carrying member of PETA to find this pretty fucking disgusting.

Maybe there’s a connection between these two stories after all. Because at this moment, I’d love to load the younger Varg into a shotgun and shoot him at the Woodland Park Zoo, and then see what happens.

A Further Question: How did they get the elephant sperm from Samson over at the the Albuquerque Biological Park? Really. Just think about it for a moment. This has got to involve something more than showing Samson a foldout of Chai wearing nothing. Some poor fucker is being paid an hourly wage in Albuquerque to give an elephant a hand job. We know times are tough, but think about putting that on your resume. Sheesh. [Thanks to our bud Ian for thinking of this most provocative question.]

Random serendipity: By sheer coincidence, we just found out that Bison B.C. has a new album coming in April which includes a song called “Stressed Elephant.” You can listen to it here.

2 Responses to “VARG SPEAKS; THE DETAILS OF ARTIFICIAL ELEPHANT INSEMINATION”