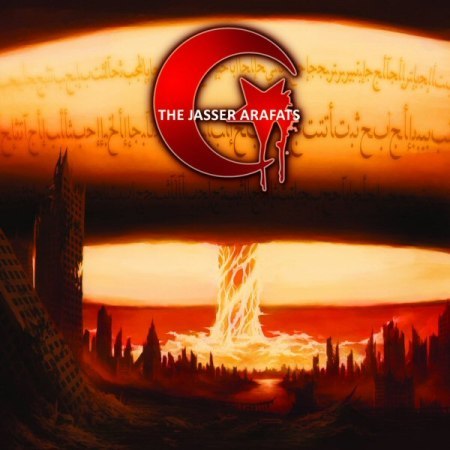 Suomalaista Metallia! About a week ago we stumbled headlong over a band from Finland oddly called The Jasser Arafats, and learned they were sharing the stage with the awesome Kalmah last week in Finland. Apart from the strange band name, the album art by V. Nyström from their forthcoming full-length debut was also arresting, and they had a widget that allowed us to listen to four tracks from the album. So we thought, what the hell, let’s listen to what they’re doing. And we liked what we heard and we wrote a short post about it.

That led to contact with the band, and although we couldn’t worm out of them the story behind the band name (more on that later), they did give us an advance listen to the whole album (Condemnation), which is due for an April 14 release on Violent Journey Records.

Listening to all 12 of the album’s tracks confirmed our reaction to the four teasers, and what we wrote a week ago still holds true:  “Press play and it’s like opening the door to a blast furnace of scorching headbangery. There’s a real talent for riffage here, with grooves galore, ridiculously hard rhythms, and top-notch, full-throated, howling vocals.”

The music on Condemnation isn’t what you might expect from a Finnish extreme metal band. It’s a modern, American-style blend of thrash, death metal, and power grooves. Almost all the songs leap out of the box in a thrash-paced assault, with fast, percussive, down-tuned riffing and aggressive drumming. But there are rhythmic variations within each song, and a few (like “Price”) feature pronounced breakdowns.The guitars have got a thick, fuzzed-out quality, and the band has a talent for producing some relentlessly infectious riffs.  (more after the jump . . .) 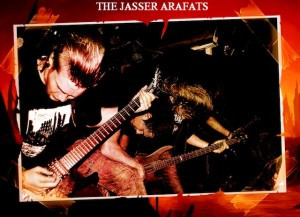 The work behind the kit is sharp and effective, with just the right seasoning of blast beats, double bass, and galloping snares. And Jari Kurki’s vocals are the shit! Instead of the higher-register shrieks and rasps you hear in many nu-thrash bands, Kurki delivers lower-register death-metal style vocals, but with excellent range (featured to particularly striking effect on “Ritual Justice”).

On Condemnation, you won’t find particularly complex rhythms or pyrotechnical shredding, though every so often (on songs like “Guns=Life” and “Ritual Justice”) the JA’s punctuate the songs with brief, shrieking guitar solos. What Condemnation delivers is music made for moshing — memorable buzz-saw riffs, pummeling drumwork, and hair-raising death vocals, with just enough melody and rhythmic variation to keep things interesting. There’s plenty of nastiness in the guitars and guttural viciousness in the vocals, but to our ears this music isn’t dark or evil — it’s just good old, brutally ass-kicking fun.

And so what about the band’s peculiar name? We did ask the guys where the hell it came from and what it’s intended to signify, and all we got was this answer: “The name of the band shall remain a mystery. It was invented during some brootal drunken night.” 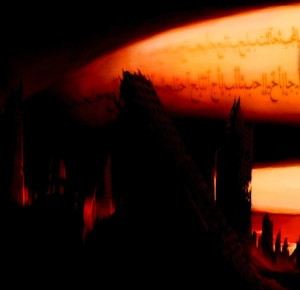 We also asked for some background info about the band members, and were told: “All the members of The Jasser Arafats have had mutual projects before (guitarists and singer are from Joukkomurha and our drummer played live bass during Joukkomurha’s 2008 tour with Prohibitory.)”

And finally, we asked for the best way to buy Condemnation (which is available for pre-order now), and the answer is through Record Shop X, which ships internationally. You can order, and be the first kids on your block to get mail from Finland (uh, unless you live there), by following this link.

Last but definitely not least, if you didn’t sample the music from that widget we embedded last week, here’s a second chance. This shit sounds good even if you’re not drunk on your ass, but getting wasted first does enhance the experience.