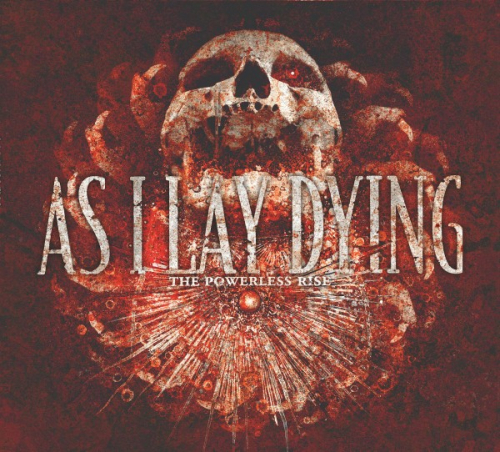 The cool album cover by J. Bannon features a red-eyed skull exploding from below, and a similar image is on the fold-out CD insert, but with the explosion coming out the top of the skull. It’s a fitting image, because The Powerless Rise includes some serious skull-exploders — some of the most intensely aggressive music As I Lay Dying has yet produced. Take off your neck-braces and prepare to injure yourselves all over again, because this album overflows with music that will compel you to bang yo heads.  (more after the jump, including a track to stream . . .) 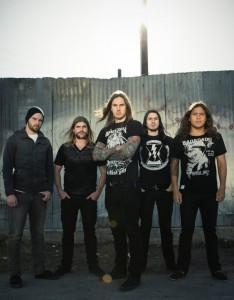 “Beyond Our Suffering”, “Without Conclusion”, “The Plague”, and “The Only Constant Is Change” feature no clean singing at all. They’re fast and hammering, a blend of thrash and groove-heavy melodic death metal with sharp-as-tacks sound from the rhythm section, Gothenberg-style dual-guitar harmonies, and some fiery solo work. The vocals belong entirely to Tim Lambesis, who proves all over again that he’s got a killer extreme-metal voice. It’s all vicious, but with great variety in tone and range.

Those songs are particularly welcome to our ears (which are used to being smashed with round-house blows), but the remaining tracks are also immensely appealing. They feature As I Lay Dying’s trademark mix of violence and melody, with clean choruses by bassist Josh Gilbert appearing in sharp contrast with Lambesis’ harsh roaring. The songs are embedded with sharp melodic hooks dipped in infectious poison. They rip and tear, but they also soar like birds in flight.

And that remains (at least for us) at the heart of why this band’s music has retained its appeal after five albums. There is still something irresistibly cool about the juxtaposition of fury and beauty, sledgehammer rhythms and melodic leads, in-your-face growling and clean choruses.

Fueled by powerful lyrics that protest indifference to injustice and plead for an awakening from our “over-fed but undernourished” existence, The Powerless Rise is also a passionate indictment of complacency. As Lambesis shrieks on “Anger and Apathy”, “I need to burn inside/I need to know you are alive.” At least half his wish has come true, because this album burns.

In our most humble opinion, there’s no one song on this new album that matches “The Darkest Nights” (from Shadows Are Security) in pure infectious genius, but “Anodyne Sea” comes close.  Check it out:

As I Lay Dying: Anodyne Sea

2 Responses to “AS I LAY DYING”