Scott Hull is a fascinating dude. He’s the guitarist and producer for the blazingly awesome Pig Destroyer and Agoraphobic Nosebleed. He’s an incredibly knowledgeable observer of the most remote corners of the underground metal scene. He’s smart as a whip and very articulate. He works as an IT specialist when he isn’t creating furious, brain-scrambling music. He’s a father and he lives in a nice suburban home in the D.C. area.

If you’ve got more time to burn after you finish this post, you oughta read the feature on Hull, Pig Destroyer, and the grind scene that was published, of all places, in The Washington Post‘s Sunday magazine last August. It’s fascinating to read a non-metalhead reporter’s peak inside the world of a band like Pig Destroyer, trying to describe the experience for the kind of people who read The Washington Post (i.e., people unlike you and me) (“As the band ripped into the first song, I had the sensation of standing under a bridge as it was being torn apart.”)  It’s long, but worth reading through to the very end. Check it out here.

In 2008, Hull pulled together a collection of music from multiple underground bands and brilliantly named it This Comp Kills Fascists. It featured material from acts like Insect Warfare, Magrudergrind, Weekend Nachos, and Kill the Client, as well as the first new music in more than a decade from legendary grind militia Brutal Truth. It served as something of a launching pad for the careers of all those bands and more. It included 51 tracks of music from 14 collectives.

Now, Hull has done it again, with This Comp Kills Fascists 2 — except more so. The new compilation is set for a June 28 release on Relapse Records and is available for pre-order at this location. It’s an international grab-bag of brain-coring grindcore, powerviolence, hardcore, and metal from bands you’ve probably never heard of — 19 of them to be precise, playing 74 tracks of music. That video at the top of this post is a trailer for the album, and after the jump, we’ve got more news about the project — and a widget that will allow you to stream the whole ear-bleeding thing right here.

As Hull described the project to Decibel: 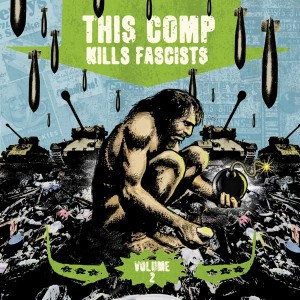 This one definitely has more bands and it definitely has more material. Same general cross section—there [are] some metallic bands, more bedroom, boom box recordings, same kind of thing. There’s a lot of really good stuff going on with this one. I don’t want to say it’s better, but there is a lot of ferocious stuff. I have a shitload of material, as you’ve probably guessed. My whole point behind doing these comps was to give bands not only exposure but to give people that are checking the bands out a good cross section of material. For me, that doesn’t come from one or two songs on a comp. So, that’s why I asked all the bands for what would amount to the side of a split 7-inch, so roughly three to five minutes.

The last time we wrote about a grindcore comp (at this location), it was a French collection of 77 songs called French Faces of Gore. We didn’t have the fortitude to barrel our way through to the end, but one of our readers did that and survived the experience to write a review, which we posted.

We’re still listening to This Comp Kills Fascists 2, and we’re hell-bent to finish it.  And we might actually succeed, if we could just stop going back and listening repeatedly to some of the tracks we’ve already heard. There really is some good shit on this album. Don’t be surprised if it functions as a launching pad for some of these bands, just as the first comp did for the bands it featured. In other words, the day will probably come when you can say, you heard ’em here first.

And now here’s the ReverbNation widget with all the songs to stream. Just don’t plan on doing any serious thinking, or any activity that requires fine motor skills, after you’re done.