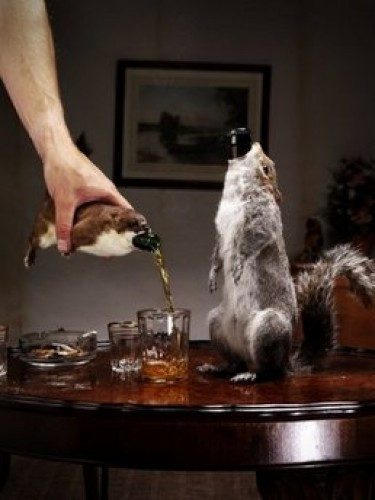 Yes, your worst fears have been realized. No metal news today, no album or concert reviews, no interviews. Just another edition of this feature, where we share with you recent news stories that made us say: “Fuck! That’s Metal!” — even though it’s got nothing to do with music — along with our tasteless editorial observations.

Writing these “That’s Metal!” posts isn’t easy. We actually have to browse the hard news to find this stuff. We have to wade through the stories that actually make headlines in newspapers, which is pretty fucking depressing. We don’t like being depressed, which is why writing this ongoing feature is pretty much the only reason we read the news anymore. We do it all for you.

We don’t do this on any regular schedule. It just depends on how long it takes to build up the fortitude necessary to go back to the real world long enough to find this shit. All the stories featured in today’s post came from news reports we saw on a single day (yesterday), and as usual, most of the them came from the crack investigative journalism available in our local paper, The Seattle Times.

There’s a theme to today’s round-up: Survival. Well, all except the story that’s associated with the photo at the top of this post. That one we included just because we needed an image that would catch your eye right off the bat. The story is pretty fucking funny, and there’s a video that goes with it. But you’ll have to wade through the Survival stories to get to it.

Oh yeah, we picked some smokin’ musical accompaniment for today’s features, just so’s you don’t get bored, cuz we know you have short attention spans, just like we do.  Follow along with us (after the jump). 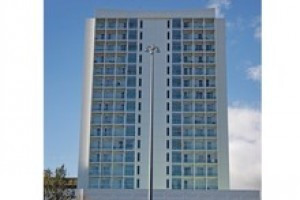 Our first entry comes to us courtesy of The New Zealand Herald, which reported as follows:

July 26, 2010 – A teenager miraculously survived with minor injuries after falling 16 storeys from his family’s Manukau City apartment through a carpark roof on to a concrete floor.

The boy dropped 14 storeys from the apartment balcony on the corner of the complex. After a fall of three seconds, he hit the steel roof of the carpark below at an estimated 100km/h. He smashed through the carpark roof, cladding and metal webbing before dropping another two storeys to a concrete floor.

He is believed to have suffered only a broken wrist, a broken rib, a gouged leg and internal injuries. Medical experts are amazed he was not killed.

A New York doctor who had dealt with a high number of falls said in 2008 that the death rate from a three-storey fall was about 50 per cent, but people who had fallen more than 10 storeys almost never survived.

We’re pretty fucking amazed too. There must be titanium in the Manukau water supply. All we had in our water supply growing up was fluoride. And trace amounts of fecal coliform. Wonder if anyone saw this happen?

One tenant was smoking on his apartment balcony at 9.30pm on Thursday when the teenager fell in front of him. The tenant raised the alarm immediately.

Bet he did. Wonder what the first words out of his mouth were? “Fuck! It’s raining wankers!” 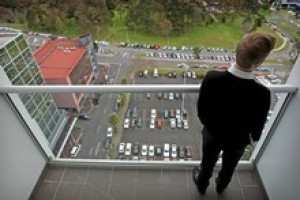 An intensive care medicine expert said yesterday that it was rare for someone to live if they plunged from more than five storeys, and “freakish” if they survived a fall from 16 storeys.

Neil Thomson, associate professor at the University of Otago’s physics department, spelled out the unlikely escape from more serious injury or death.

He said a person falling from 45 to 50 metres would reach a speed of 100km/h by the time they struck the ground.

Coming to rest over 5 metres mean the person’s force of impact would have been approximately 10 g – twice as strong as slamming on the brakes in a Formula One car at full speed.

Y’know, our advice to this young dude is that the next time he wants to build up a good head of steam, he should just listen to some grindcore. Yes, that hurts too, but the “coming to rest” part isn’t quite as traumatic. Wonder if there’s any practical information we can take away from this story?

The key to the Manukau teenager’s survival may have been that he avoided falling head-first. An American study of 200 falls showed a person is just as likely to survive a five-storey fall landing feet-first as they are a one-storey fall headfirst.

So keep that in mind the next time you find yourselves in free-fall from a high place. Feet-first is the way to go. Doesn’t matter how much of a metalhead you are, heads don’t seem to hold up as well when they “come to rest” on concrete as feet do.  Here’s your musical accompaniment:

Next up is a story about a sailing expedition organized by well-meaning but clearly insane people. This could have had — probably should have had — a bad end, but it didn’t. Another tale of survival that made us say “That’s Metal!”. 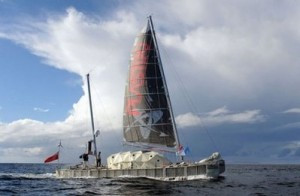 SYDNEY – A sailboat largely constructed from 12,500 recycled plastic bottles has completed a 4-month journey across the Pacific Ocean meant to raise awareness about the perils of plastic waste.

The Plastiki, a 60-foot (18-meter) catamaran, and its six crew weathered fierce ocean storms during its 8,000 nautical miles at sea. It left San Francisco on March 20, stopping along the way at various South Pacific island nations including Kiribati and Samoa. It docked Monday in Sydney Harbour.

Holy fuck! We might be convinced to get on a boat made of plastic bottles if it was, like, floating in a shallow swimming pool. But using it to cross 8,000 miles of open ocean? They should have named that boat “The Death Wish”.

“The journey of the Plastiki is a journey from trash to triumph,” said Jeffrey Bleich, the U.S. ambassador to Australia, who greeted the team after they docked.

Expedition leader David De Rothschild, 31, said the idea for the journey came to him after he read a United Nations report in 2006 that said pollution “and particularly plastic waste” was seriously threatening the world’s oceans.

He figured a good way to prove that trash can be effectively reused was to use some of it to build a boat.

Well, that was an obvious conclusion, wasn’t it? You think about garbage. You think about the importance of recycling. And you decide to build a boat out of garbage. Happens all the time. From trash to triumph (for a minute there, we though the ambassador was talking about Lady Gaga.)  Wonder how they held all those plastic bottles together?

The boat is almost entirely made up of bottles, which are held together with an organic glue made of sugar cane and cashews . . . .

You’re shitting me. This can’t be true, can it? Doesn’t sugar dissolve in water? On the plus side, if they ran out of food, they could just eat the glue. 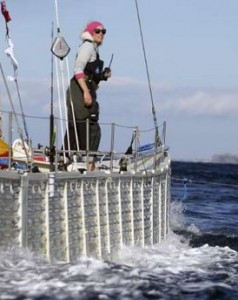 During their 128-day journey, the six crew lived in a cabin of just 20 feet by 15 feet (6 meters by 4.5 meters), took saltwater showers, and survived on a diet of dehydrated and canned food, supplemented with the occasional vegetable from their small on-board garden.

Skipper Jo Royle also had the particular challenge of being the only woman on board.

Now that’s fucking metal. That poor chick spent 128 days living out of a 20 x 15 foot cabin with five dudes in broiling heat who had to shower exclusively in saltwater. That must have been irreparably traumatizing. She may have survived the journey, but the inside of her nose must be permanently raw. That sounds worse that touring by van with a metal band (just barely).

Although the team had originally hoped to recycle the Plastiki, de Rothschild said they are now thinking of keeping it intact, and using it as a way of enlightening people to the power of recycling.

So, it turns out, after all, that the message isn’t “Recycle!” It’s something like, “build shit out of garbage and keep it in your backyard!” Guess that’s one way to keep plastic bottles out of landfills, but it might be better to come up with a publicity stunt that convinces people to quit using the things in the first place. Here’s your musical accompaniment:

If you happen to shoot yourself in the face with a gun, take heart. All is not lost. 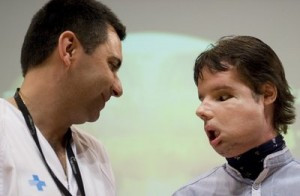 MADRID – A Spanish man who underwent the world’s first full face transplant appeared before TV cameras Monday for the first time since his surgery, thanking his doctors and the family of the donor.

During the 24-hour surgery, doctors lifted an entire face, including jaw, nose, cheekbones, muscles, teeth and eyelids, and placed it masklike onto the man. He has been described as a farmer who was unable to breathe or eat on his own after accidentally shooting himself in the face five years ago.

Shit. If this isn’t metal, we don’t know what is. There’s a lot to be amazed about here, but to be honest, we’re fixated on this question: How do you find a face donor? “Hey bro, if you’re not using that face, could I buy it from you?” Or, “Hey bro, your face is uglier than my rectum. How ’bout a trade-in?” 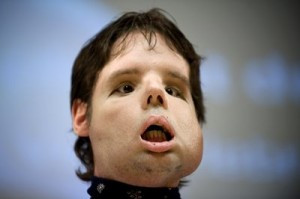 A younger woman identified as his sister, whose name was not given to protect the family’s privacy, said her brother looks forward to leading a normal life.

He is eager to enjoy “little things, like walking down the street without anyone looking at him, or sitting down for a meal with his family. Doing things that all of us do on a normal day,” the woman said.

“Walking down the street without anyone looking at him”? Uh, hate to break it to you sis, but that ain’t gonna happen.

Dude looks like he just listened to the latest Attack! Attack! release.  Anyway, how ’bout some musical accompaniment? We came close to picking “Face Area Solution” by The Red Chord, but settled on this one instead:

And now back to our top story, courtesy of The Boise Weekly: 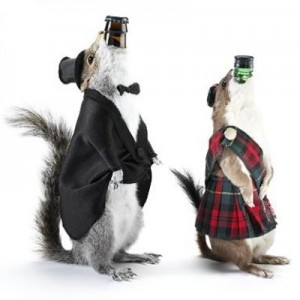 Beer bottles sold by the Scottish Brewery BrewDog are seen inside the bodies of stuffed animals. The strongest and most expensive beer ever created sold out within hours Friday, BrewDog said as they courted controversy by packaging the bottles inside animal receptacles.

BrewDog, a microbrewery out of Scotland created the world’s strongest beer at 55 percent alcohol. And while that was sure to raise a few eyebrows, the company decided to go a step further and place the limited edition of 12 bottles inside the taxidermined bodies of squirrels, stoats and a hare.

The bottles—which cost roughly 500 pounds, or more than $700 each—sold out in less than four hours, although the controversy they are raising is sure to last as long as the preserved bodies of the beer-cozies.

Mind you, we wouldn’t wanna drink our brew out of one of those things. Those little beady eyes would be looking right into yours as you poured that shit down your throat.

And after the second or third of those 55%-alcohol brewskis, we might start imagining that those little fuckers are starting to move again. If that happened in mid-swallow, we’d get the chance to see if this beer tastes as good coming back up as it does going down.

We promised you a video, and we don’t lie. Check out the guys from BrewDog explaining how they came up with this lunatic — but very metal — idea. Personally, we think they’ve been hittin’ their own stockpile of brew a bit too hard.

The video is pretty funny, assuming you can decipher the Scottish accents, but if you’re German, you may be offended.