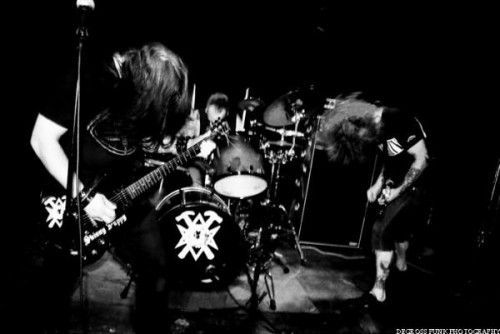 We first heard about Wolvhammer’s debut album, Black Marketeers of World War III,  via a feature in the current issue of DECIBEL magazine, which punched many of our buttons — so much so that we ran out and bought the album fast. And we are so glad we did.  (more after the jump, including a mixtape of music inspired by Wolvhammer . . .) 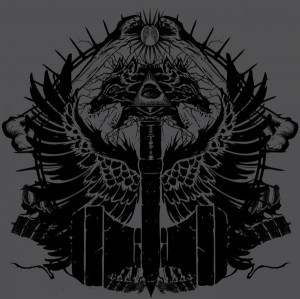 Black Marketeers is a dark-roasted brew of stripped-down black metal, mid-tempo punk rock, death ‘n roll, and grinding stoner sludge. It’s raw and feral, and very much like its namesake — the predatory wolf in all its aspects.

More often that not on this site, we write about rip-roaring, cathartic music that rattles your cage fast enough to unmoor your mind. That’s not what Wolvhammer is about. But it’s no less gripping, and no less capable of plugging into the primitive coil that heats the predator within you.

The wolfpack slinks through a dark forest, stalking its prey, their red eyes gleaming like coals — and Wolvhammer sets the mood with slow, post-metal crunches, down-tuned and massively pounding.

The prey senses its peril and begins to run — and the pack begins to lope ahead, faster and faster — and Wolvhammer segues from those slow, ominous intros into faster-paced, tremolo-picked chords, rapid-fire drumming, and high-pitched shrieking.

The prey pauses, knowing it will not outrun the pack, and wondering what it can possibly do to evade the onslaught — and the pack slows with it, as Wolvhammer glides back down to a slow rhythm, with death ‘n roll chords and methodical, head-snapping drums.

The prey makes one last, frenzied attempt to find freedom — and Wolvhammer’s pack charges again as the band shifts back to black-metal picking and machine-gun drumming. 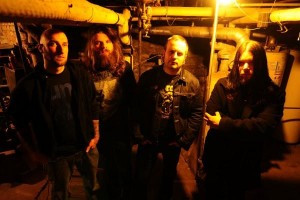 But in fact, there is no hope, and the music yields none either. There is rending and tearing and unleashed mayhem at the end — and we do mean the end, of the last, longest song on the album, “Monolith”, when a cacophony of feedback, berserker chords, throbbing pulses, and all manner of other dark, distorted, frying electric noise erupts and then fades out of existence.

Many of the songs on the album are organized around infectious, recurring punk riffs — riffs that connect the shifts in rhythm and musical style. But that raw punk sensibility doesn’t change the dominant motif — which is one of menace and doom, the loss of the race, the ending of existence.

Wolvhammer’s particular blend of styles vividly puts us in mind of Darkthrone, just as it did DECIBEL‘s reviewer — a similar combination of nasty, slow, down-tuned menace, raw punk chords and rock rhythms, and black-metal influence in the vocals and tremolo-picked leads.

We’re reminded of other bands as well — bands like early Entombed and more recent juggernauts like The Helm and Gaza.

Wolvhammer certainly stands on their own, regardless of influences. We’re just sayin’ they put us in a certain frame of mind — and this music is more about mood than anything else. So we thought we’d share with you the path of musical progression that we followed after Wolvhammer set us on our way.  Hope you like it as much as we did.

Darkthrone: Sacrificing To the God of Doubt

The Helm: Because We Can

Wolvhammer’s debut album is available at iTunes, Amazon, and elsewhere, and the band is still making its two EPs available for free download at their blog (here).