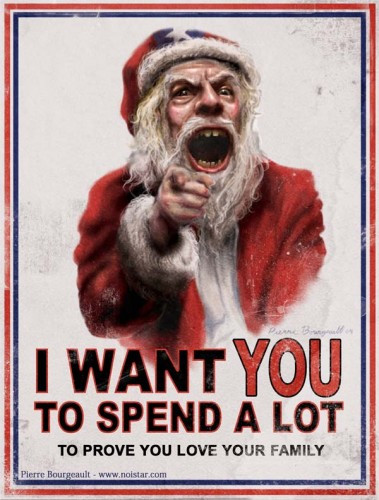 Black Friday and Cyber Monday are behind us, but the relentless commercial onslaught that is Christmas is not done with us yet — not by a long shot. To borrow what Matt Taibbi vividly wrote about Goldman Sachs, the commercial Christmas machine will continue to wrap itself around the face of Western humanity for the next 30 days like a great vampire squid, “relentlessly jamming its blood funnel into anything that smells like money.” As you’ll see, even some metal bands turn into vampire squids this time of year.

Yes, we need to vent a bit. That’s all. To be brutally honest, which is the only kind of honest we know how to be at NCS, we have nothing original to say about Christmas. Will that stop us from expressing our opinions?  Fuck no!  If incisive original thought were a requirement for NCS posts, we’d be in very deep shit. Lacking any such constraints, however, we will proceed — and you can’t stop us!

You might infer from the title of this post that it will just be an atheistic diatribe against Christianity, but you would be wrong. From our point of view, it really doesn’t matter whether you’re a Christian, an adherent of some other faith, or someone who has concluded that God is a myth, that Jesus was just a man, and that religion is for feeble-minded sheep.

Really, it doesn’t matter what you believe or don’t believe: All right-thinking people, Christians or not, theists or atheists, should raise their voices and middle fingers in unison and repeat after us: FUCK CHRISTMAS! (more after the jump . . .) 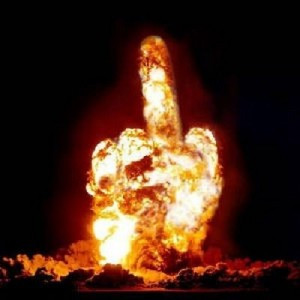 Maybe you believe Jesus was the son of God and died to redeem our manifold sins. Maybe you don’t buy the idea that Jesus was the son of God, but you still respect how he lived and what he taught before his crucifixion. In either case, it would be understandable that once a year, you might want to pause, remember, and reflect on his birth, and maybe even celebrate it — quietly and humbly.

Good luck with that. Is there a worse time of year than the “Christmas season” for quiet reflection about anything? Every available print, audio, and video media outlet is relentlessly spewing out exhortations to spend your fucking money, whether you have it to spend or not. Almost everything that is said publicly about Christmas is linked overtly or subtly to loosening your wallet, to converting your money into someone else’s money. Even the churches expect better-than-average contributions from their congregations this time of year.

A time for remembering someone’s birth has become, like virtually every other Western “holiday”, an occasion for commercial interests to part you from your money. If a business has got something to sell, this is the primo time of year to sell the shit out of it, even if the person whose birth is the excuse for the money-grubbing was famously disdainful of material possessions. They’ll spend the next 30 days trying to stick electrodes up your bunghole and fire up the voltage, repeatedly, until you surrender and spend yo fucking money.

It really doesn’t make sense. Do you know of any other occasion where we are exhorted to celebrate one man’s birth by giving presents to other people? Lord knows, Jesus doesn’t need the  presents. Depending on your beliefs, he’s either fucking dead or he’s someplace where he don’t need a nice Blu Ray player. We don’t claim any special insight here, but we’ve got a feeling he wouldn’t want a celebration even if he were still alive, much less any presents.  In fact, our feeling is that he would be fucking apoplectic if he saw the materialistic orgy that erupts at this time of year.

Look, we know some people love to shop, to wrap presents, to decorate, to drink the fucking egg nog, and for lots of those people, any excuse will do, and it’s got precious little to do with religion. But if you’re not one of those people, Christmas just becomes a fucking grind in which you feel pressure to give gifts to family members — whether you want to or not, whether you can afford it or not, whether the gift recipients really need or want the gifts, whether there is any genuine reason to do it at this time of year, except we live in a culture that has conditioned us to do it.

And that commercial compulsion is perpetuated down from generation to generation. What we do for children at this time of year — the presents under the tree, the Christmas-oriented entertainment in which we immerse them, etc. — the things we do either because that’s what we think we’re supposed to do or because we like seeing the happiness and wonder that all those things can generate, well, there will be  a reckoning for all that. They will grow up to be just like us — more fodder for the vampire squids whose mantra is: Spend! Spend! Spend ’til it hurts! And if you don’t, you’re a fucking waste of a human being! 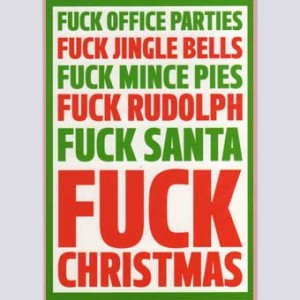 It’s almost all bad, and if you’re not a Christian it’s even worse. If you don’t buy the line that Jesus was the son of God, if you don’t even buy the line that there is a god, well then, the “Christmas season” is an annoyance at best and an insufferably obnoxious alien invasion at worst. Except it’s not like Independence Day — you can’t send Will Smith and Jeff Goldblum in a purloined alien fighter up to the mothership and blow the living shit out of it. No, this is an alien invasion that can’t be repelled or exterminated — because we’re doing it to ourselves.

And don’t get us started on the music! The wretched carols you’ve heard thousands of times before, the Christmas-themed pop songs, the “Christmas albums” churned out by performers who just want to cash in — in other words, the absolutely unavoidable deluge of seasonal crap music. No doubt, some artists make Christmas-themed music as a display of faith, but many are no more Christian than your average hyena, and what they’re doing is just hoovering up the dollars. 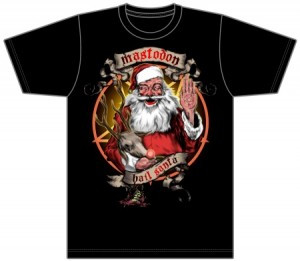 You think metal bands are immune from the impulse to make a buck off Christmas? No such luck. Mastodon is promoting “a super-limited-edition Christmas t-shirt”, yours for only $18.99 plus shipping. Black Label Society has released a holiday single, “The First Noel”, available for purchase at iTunes. In what has become an annual tradition, August Burns Red has released a cover of yet another Christmas carol (this year, “The Little Drummer Boy”). BEC Recordings has released a compilation called Happy Christmas Volume 5, featuring “fourteen holiday cuts with a focus on more edgy, alternative style of music than what is expected for this time of the year”, including tracks from the likes of Demon Hunter, August Burns Red (again), and Emery. And there’s more, but that’s enough.

You can talk about happy and jolly and ivy and holly and mistletoe and Santa and elves and reindeer all you want, never mind that none of that stuff has anything to do with the nominal occasion for all the fun, but at its blackened core, Christmas is really a frolic for the vampire squids, a march of the drones (thank you Obitus), and we would be better off without it.

There. We’re done. We got that out of our system. Tomorrow, we’ll be our normal friendly, kind-hearted NCS selves once again. Now we have to go think about what fucking Christmas presents to buy for family members. But ringing in our heads while we do it will be this little anthem:

Do you think this rant is off-base?

Do you think we’ve got a toxic case of humbug?

Or do you subscribe to our un-original thoughts about this artificial excuse for commerce?

Speak up!  This is what comments are for!

[UPDATE: One of the comments below reminded us of this video. Yes, this is one of the few pieces of Christmas music we can tolerate. In fact, it’s better than tolerable — it’s fucking great.  And this video never ceases to put a smile on our Scroogy faces. There are even snazzier versions of this idea out there, but the original is still very strong. Trans-Siberian Orchestra — “Wizards of Winter”: