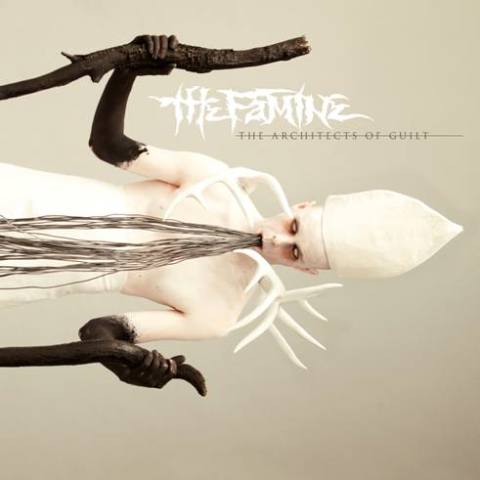 Join us once again in our continuing quest for new ways to describe music in mere words. This review will be filled with metaphors and similes (necessarily pathetic ones because we are writing them ourselves) because The Famine‘s new album, Architects of Guilt, demands more than usual review verbiage is capable of expressing.

Imagine this: You come across a big nest of dormant, Texas-sized red wasps, and you drop it gently into a big bag. Carefully, you walk over and stand on an electrified floor, you shake the bag vigorously until all the wasps are awake and really pissed off, then you stick your head in the bag while big pulses of electric current shoot up through the soles of your feet in a syncopated rhythm — and a welterweight boxer uses your kidneys as a punching bag.

And for good measure, your friend the welder periodically applies a burst of acetylene flame to the base of your neck, without so much as a reach-around.

There you have it: That pretty much describes what we felt when listening to The Famine‘s new album, Architects of Guilt. We could just stop there, but we get paid by the word here at NCS, so there’s more to come!  (after the jump . . .) 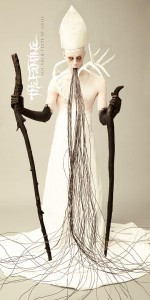 Let’s talk about the vocals. They’re of two kinds, and the juxtaposition is a consistent feature of the music, though it’s probably the most striking in the call-and-response tradeoff in “Turner Classic Diaries”. And for you fans of The Famine’s first album, this is one change you’ll notice: On the high- and the low-end, the vocals reach extremes you didn’t hear on the band’s label debut.

In one kind of vocals, Nick Nowell sounds like he gargled with the juice of 100 jalapenos before stepping up to the mic. All that unmatched acid fire melting his vocal chords brings forth a level of balls-to-the-wall shrieking that will make your eyes pop open like kernels of roasted corn when you hear it. He sounds really pissed off — because he pretty much is.

Then there’s the other kind — the kind that makes you think you’ve just come face-to-face with a roaring grizzly bear in the woods, standing about 8 feet tall on two legs, and all you know to do is wet yourself in anticipation of the claws coming down on your eggshell skull.

So, I can imagine you’re asking about the drums now. I’m glad you asked. Mark Garza attacks them like someone who has one chance, and only one chance, to avoid a firing squad’s fusillade at dawn — and that’s to hit those skins as fast as humanly possible without allowing the firing squad to get bored. If Iwere a triggerman, I’d be holding my fire, wanting more. Oh yes, my second time through this album I did almost nothing but listen to the drums.  Acrobatic, but definitely not boring.

The guitars? Yes, they’re damned important. After all, this is a near-grind-paced, technically oriented death-metal band from the Great State of Texas, and so yes, you’re smart to ask about the ax-work. And here’s your answer: It’s proof that science has finally succeeded in splicing the DNA of cheetahs and humans. 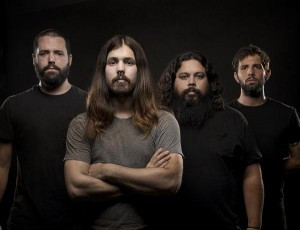 Andrew Godwin‘s guitars are speedy and predatory and oh so clever. They race and leap and stagger and turn on a dime, as if matching stride for stride a springbok trying desperately to escape its fate. In addition to all that dextrous riffing, there are solos that shriek and spin like a dentist’s drill with a mind of its own that decides to just continue boring up into your cranium after it’s through with that tooth decay. (Hey, you can’t say I didn’t warn you about the pathetic metaphors.)

But what’s so very sweet — what makes this album an above-average tech-death offering — is the integration of irresistible groove with all the chaotic exuberance, the imposition of a structure that works within the frantic pace to keep the listener hooked and moving. That key feature of The Famine’s sound hasn’t changed.

Which brings us to the bass. Jon Richardson joined the band to take over the bass role when Nick Nowell stepped up to the mic, and he sounds like an industrial jackhammer working on a cast-iron pipe, delivering sharp, clanging, compulsive rhythms. A worthy addition to the attack.

In places, The Famine do ease up on the accelerator, albeit briefly. There’s the more down-tempo “A Pavement of Good Intentions”, with its morbid tremolo phrasings, and the even more-backed down, swampy Southern stomp that runs through the closing track, “To the Teeth” (which I liked a lot, despite how different it is from all else on the album). But I’m quite happy with the blurring pace through most of the album’s length. 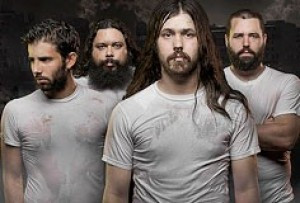 The Famine’s 2008 label debut, The Raven and the Reaping, was a helluva jaw-breaking start for this band. It’s still one of our favorite listens. Mindful of the dreaded sophomore curse, I crossed my fingers when I started listening to The Architects of Guilt. But I’ve concluded that the curse was discharged when the band’s studio burned down early last year, costing them their early work on this new album and forcing them to start over, and when the group’s original vocalist Chris McCaddon departed.

Seems like that’s more than enough cursing — and now we can report that there’s certainly nothing cursed about The Architects of Guilt. It’s a step-up in The Famine’s game that will make fans of The Raven and the Reaping very happy. I could have used more (and longer) of those superheated drill-bit solos that enlivened songs like “We Are the Wolves” and “Pyrithion House”, but that’s just because I’m a greedy fucker. Overall, I’m one of those Raven fans who’s very happy.

I should mention the production.  In the producer’s chair was D. Braxton Henry, guitarist for Devourment, and mixing duties were handled by Jason Suecof. If you like some mud and grit in your production, you won’t find it here. Everything is clean and sharp, every plucked string and drum-strike is audible. Truth be told, there were times when I yearned for something a bit more raw — but let’s face it, clean production suits this kind of technical execution pretty well, particularly because that’s one area in which this album exceeds the debut.

Here’s the opening track from The Architects of Guilt:

Oh, fuckit. How ’bout one more song? This one may be even better than the one before.

[audio:https://www.nocleansinging.com/wp-content/uploads/2011/02/The-Famine-03-We-Are-The-Wolves-watermarked.mp3|titles=The Famine – We Are The Wolves]

The Architects of Guilt will be released on February 15 on Solid State Records.

10 Responses to “THE FAMINE”