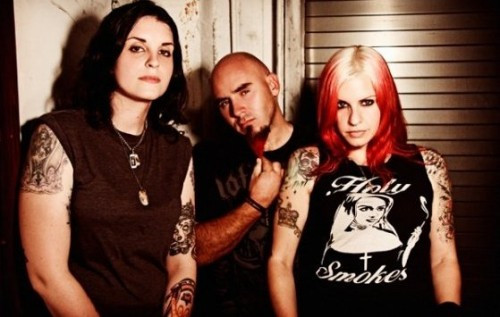 Well, I thought I’d be able to get up another MISCELLANY post during the past week to help myself catch up, but that obviously didn’t happen. (Yesterday’s MISCELLANY post was a hybrid, since I already knew two of the bands, so that didn’t really count.) At least this time I didn’t let two or three weeks go by before readying another installment.

This time I visited four more bands whose music I’d never heard, and it turned out to be an unusually diverse listening experience — and in one case pretty far outside the usual bedlam of the NCS asylum. Per the usual MISCELLANY rules, I randomly picked these bands off our running list of music to check out and tried to limit myself to one song per band (and failed). After the jump you’ll get the chance to hear the music for yourselves if the write-ups get you interested enough.

Today’s picks are Shroud Eater (U.S.), Eschaton (Austria), and The Omega Experiment (U.S.) — and in a late addition, The Villain Avian Symphony (Canada). If nothing else, these bands have a knack for picking good names, don’t you think? And, as a bonus, it turns out that almost all the music is free.

(Yes, this is a lengthy installment, but for fuck’s sake, it’s Sunday. What else have you got to do? Oh wait — it’s Super Bowl Sunday. Well, fuck me, maybe people outside the U.S. will wade through this . . .) 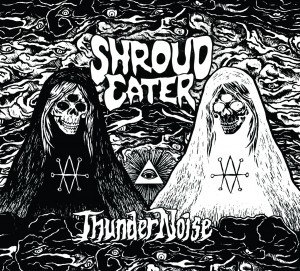 This band is a monstrous trio from Miami. I don’t mean they look monstrous (that’s them at the top of this post). I’m talking about the music. As usual, I didn’t know quite what to expect. I saw a recent press release about the band, and to be brutally honest, I decided to listen because I liked the title of their January 2011 album so much — ThunderNoise. It just sounded so damned promising (particularly in conjunction with the cool band name).

The wielders of the weaponry in this band are Jeannie Saiz (she’s the brunette) on guitars, Janette Valentine on bass, and Felipe Torres on drums. Jeannie Saiz also provides the vocals, and they’re unexpectedly Mastodon-esque, though they appear infrequently and are a bit low in the mix when they do.

I listened to the first song on ThunderNoise, “High John the Conqueror” — yet another cool name, though I have no idea where it comes from. I loved it from the very first notes — which tell you in no uncertain terms what you’re in for. It’s a massively low-end chunk of tar-choked, grungy, inexorable sludge metal. But it’s catchy as hell, thanks to injections of creative little riffs and Torres’ pounding drums. This isn’t technical, fancy music, and the production’s got a garage-studio sound to it — all of which is just fucking perfect for this exploded-transformer noise. Check it out:

Yes, I cheated on the MISCELLANY rules and listened to the next song, too. “Vesuvius” leads off with a tribal drum solo and then it’s another combination of gut-punching down-tunage and headbanging riffs and rhythms. If I had any complaint, it was a wish for a less snare-based attack on the drums — y’know, just to help drive this smoking black machine even deeper into the pit — but it’s a minor complaint.

You can stream ThunderNoise in its entirety at Shroud Eater’s BandCamp page (here), get a digital download for three bucks, and check out the art for the physical CD, which is also on offer there. The band also has one previous, self-titled release that’s available for a “name your price” option.

On more thing: It appears that Jeannie Saiz also created the artwork for the CDs and the band’s merch, and it’s fucking cool, too. I like Jeannie’s cover of that previous Shroud Eater release even more than the new one — so much so that I’m just going to put it right here: 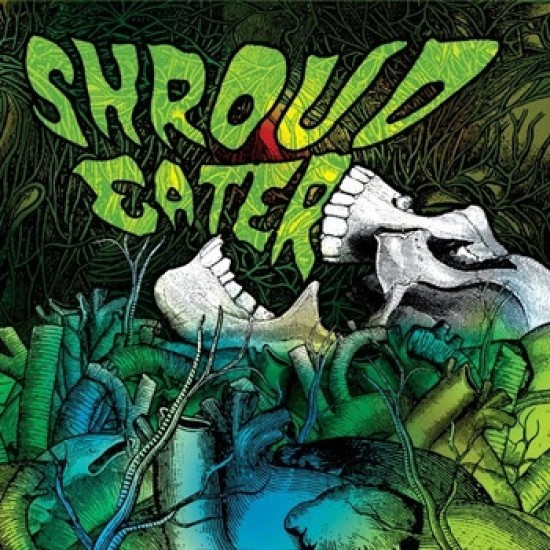 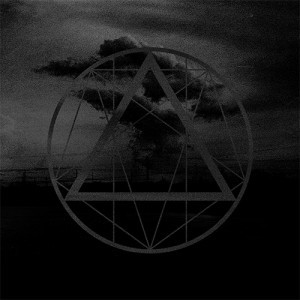 This Austrian band, which (with some line-up changes) has been in existence for 12 years, contacted us with a request that we check out their self-produced, two-song EP. The EP was released in October 2010 and follows a 6-track album called GodMode, which came out in 2004, and a 2000 album called Deus ex Homine (released by the band under the earlier name of Dominus Satanas). Both the current EP and GodMode are available for free at Eschaton’s BandCamp page (here).

I wasn’t familiar with Eschaton and had no idea what to expect as I started listening to “An Instrument of Darkness”, the EP’s title track. It turned out to be fantastic — a roaring blast of blackened death metal, but with a distinctive swell of melody building and ebbing throughout the song, a dynamic combination of tempos, and a couple of unexpected instrumental breaks — a whisp of almost prog-metal about a minute and a half into the song, and about four minutes in, a killer headbanging rhythm with short bursts of lead guitar.

I can believe these dudes have been playing for a decade or more. The riffing is intricate and expertly executed, the bass gives the sound a gut-rumbling crunch, the drumming is powerful and tailored perfectly to everything else that’s happening in the song, and the clawing vocals will raise the hair on your neck. Here’s the song:

Eschaton: An Instrument of Darkness

I listened to the second song on the EP, too, and it’s at least as strong as the first track, though more an example of melodic black metal and with a couple of other surprises, too. I won’t spoil those — just go get the EP and see for yourself. Seriously, this is superb metal.

Eschaton is working on a full-length album and hopes to complete it for release in 2011. We will definitely be on the watch for it.

For more info, Eschaton’s MySpace is here and their Facebook here. 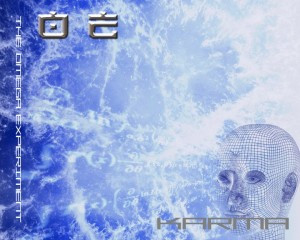 Not long ago, we got an e-mail from James Monteith at a UK-based PR firm called Hold Tight! urging us to check out this band’s debut EP, Karma. He described it as “a bedroom project” and “kind of quirky Devin Townsend-esque prog,” and he warned us that it would include clean singing. I’m a Devin Townsend fan, even when his vocals are clean, though I confess that I still long for the days of Strapping Young Lad. So, despite some misgivings, I decided to give this a shot (after treating myself to a couple of shots, just in case).

I listened to the EP’s opening track, “Furor”, and the DT reference immediately made sense. Cynic also strongly came to mind, along with Periphery and TesseracT. This well-constructed song features some very impressive, blisteringly fast, technical instrumental work in harness with a sweeping melodic chorus. Yes, the vocals are almost entirely clean, but they’re extremely good. Have a listen:

The Omega Experiment appears to be a two-man project (Dan Wieten and Ryan Aldridge) from Muskegon, Michigan, with guests helping out with vocals on the EP. You can hit up Karma for free via the band’s BandCamp page (here), and more info about this project is available at their Facebook and MySpace pages. How James Monteith took an interest in them from the UK is a mystery, but I’m damned glad he did.

Yes, I cheated again and listened to the rest of the EP — absolutely jaw-dropping shit. I haven’t become a convert to this kind of music, but it was a very nice break from the usual blood-curdling fare in my musical diet.

UPDATE: Well, thanks to an e-mail exchange, I now know the connection between James Monteith and The Omega Experiment, and don’t I feel like an idiot. In another part of his life, James is the super-talented guitarist for TesseracT (who need no introduction). As he explained to me, during TesseracT’s recent US tour, vocalist Dan Tompkins was randomly given The Omega Experiment’s CD at a show and played it in the van between stops.  James was so impressed that he got in touch with the Omega guys and decided to lend a helping hand. With luck, the help he’s giving will help push this band to take what may have been a bedroom project and branch out into something a bit grander.

I’d planned to stop this post after three bands, but I got a MySpace friend request from this Vancouver outfit, and the name was so unusual that I jumped to their MySpace player and listened to a song, just to see what a symphony of villainous avians might sound like.

The song I heard was called “Flight of the VAS”, and it was such a pleasing mind-fuck that I just had to say something quick about it here. A symphonic keyboard intro with bizarre vocal samples; flashy, thrashy riffing with electro-drums; rancid black-metal style vocal shrieking; more electro effects; submerged, off-kilter drumming; blasts of tremolo-picking; weird guitar noodling in the outro; and the whole thing careening ahead at the pace of a bullet train.

The second song on this ReverbNation widget is the one I heard, plus there’s one more:

VAS is the brainchild of Dennys McKnight (ex-Black Halo). He writes the music, sings, and handles keyboards and programming, but he’s got some serious help, including Justin Hagberg (guitars) and Ash Pearson (drums) — both from 3 Inches of Blood — plus Telford Germyn (The Hooker and Wolves, ex-Spread Eagle) on bass and Johnny Matter (vocals). I’m definitely interested in hearing more . . .

Additional info about the villainous avians can be accessed on their Facebook page.

Looking back on this particular MISCELLANY foray, I have to say that I had amazingly good luck with four random bands I didn’t know shit about before punching “play”. Excuse me now while I go buy lottery tickets.