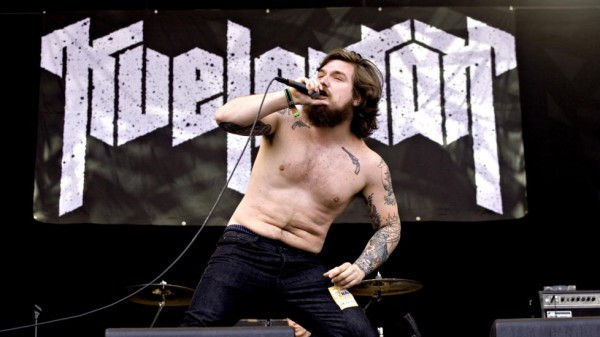 (translated from the Norwegian)

Vidar: “Did you get me the Double Whopper with cheese like I asked?”

Marvin: “Do we really have time to eat? Shouldn’t we be moving our asses onto the train? I really don’t wanna miss this flight to the U.S. I’m so stoked about this tour!”

Erlend: “Fuckin’ chill, dude. Our flight doesn’t leave for two hours. We got plenty of time. We can carbo-load here at the BK, catch the train to the airport, and be on board with time to spare.”

Kjetil: “I can’t believe we’re about to eat all this shit. Erlend, you do this every time you smoke a bowl. It’s like some kind of special BK blend of weed. You smoke up, and then you make a straight line for the nearest Whopper. Fuck, since we got the Statoil prize, we can afford decent food. Cheap-ass motherfucker.”

Erlend: “Fuck you bro. No way am I gonna sit on that fuckin’ airplane for 9 or 10 hours without gettin’ my smoke on.”

Bjarte: “Erlend, man, you got the passports?”

Marvin: “What are you talkin’ about dude? What the fuck happened?”

Maciek: “Sit the fuck down! Where are our fucking passports?!?”

Erlend: “I came in here by myself. You fucktards were late. I had all of our fuckin’ passports in my backpack. I put the fuckin’ backpack right here, right next to me in that seat where your fat ass is now parked. I went to order the burgers, and now the fuckin’ backpack is gone!”

Bjarte: “Did you really leave the backpack on that seat, here at the table, all by itself, while you went to order the goddamn food? Please tell me you didn’t do that. Please tell me you’re not as stupid as I’ve always thought you were.”

Erlend (beginning to weep): “Fuck, what are we gonna do?”

Marvin: “Wait!! Does this mean we won’t be able to make our flight? What about our fucking tour? We’ll never make it to Seattle in time for the first tour stop!”

Bjarte (beginning to viciously punch Erlend about the head and shoulders) : “Hey no problem, Erlend can just roll up our fuckin’ plane tickets (punch, punch) and fuckin’ smoke ’em!”

Vidar: “What are we gonna say about this? What are we gonna tell the promoters, and the venues, and our fans? They’re gonna think we’re the biggest bunch of brain-dead slackers on the fuckin’ planet. Goddamit Erlend, I’d like to soak you in lye like a fuckin’ lutefisk.”

Erlend: “Shit, shit, shit!! Hey, I know! Euro bands are always having visa problems with fuckin’ US Homeland Security. We can just say the US government found some kinda problem and wouldn’t let us in!”

Marvin: “And you think the US government will just play along? How much fuckin’ weed did you smoke? No, we ain’t gonna lie about this, because the lie will come out. YOU, Erlend, YOU are going to publicly confess what a fuckup you are. YOU are going to the passport office on Monday and get us new goddamn passports. We might still make it to the States in time for SXSW. And if we can’t get a refund on our plane tickets, I’m gonna get the money back by skinning you alive and selling your skin on eBay.  I can’t fucking believe this.”

Yes, I made up this conversation. However, sadly, I did not make up the fact that on the night of March 4, 2011, Erlend Hjelvik was getting a bite at the Oslo Central Station Burger King, where his backpack containing all of the band’s passports disappeared.

I did not make up the fact that the band paid 70,000 krone for their plane tickets and, at the moment, have no idea whether the money will be applied to new tickets, refunded, or simply be gone forever.

I did not make up the fact that the band’s first stop on their tour with Weedeater and Zoroaster was supposed to be tomorrow night, March 7, here in Seattle — a show I was planning to attend.

I did not make up the fact that in February, Kvelertak won the Norwegian Statoil grant of 1,000,000 Norwegian krone (approximately $180,000) — a prize intended to help promising Norwegian bands on the verge of international breakthrough to succeed internationally.  All of these facts can be verified at this location.

One more footnote: Kvelertak was nominated for two Spellemann awards (the Norwegian equivalent of the Grammy Awards), in the categories of “Best Newcomer” and “Best Rock Album.” The awards ceremony was held last night (Saturday, March 5). Kvelertak won both awards. Maybe they got to attend the award ceremony since they missed their flight to the U.S. Some cats always seem to land on their feet.

This tour poster is no longer accurate. I’m going to console myself now by listening again to the music we put up in today’s other post. Sigh. 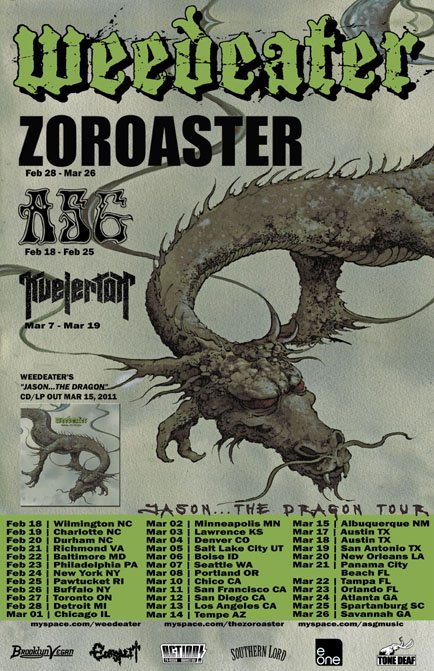 I’ve added a few “breaking news” updates in the Comments below. Maybe someone who speaks Norwegian can tell us if the band’s comments in the video of the Spellemann awards included reference to the Burger King incident.

I’ve also decided that since I can imagine the conversation Friday night, I’ll just imagine Kvelertak taking the stage tonight in Seattle before Zoroaster and Weedeater play. Imagination’s a wonderful thing, isn’t it?

12 Responses to “WHAT WE IMAGINE WENT DOWN AT THE OSLO CENTRAL STATION BURGER KING (AND WOULD WHOEVER TOOK KVELERTAK’S PASSPORTS PLEASE GIVE THEM THE FUCK BACK!)”