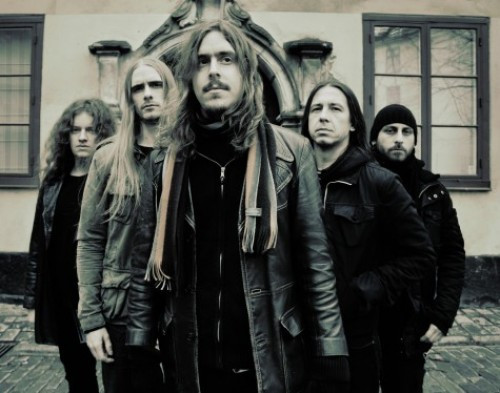 I’ve been thinking about Opeth, and it has affected my word formulation. It’s some kind of temporary phonemic speech disorder, I think. But I’m not sure. I’ll have to continue thinking opon it. But for now, onward and opward!

So yes, I’ve been thinking about Opeth because some additional details were released this morning about their next album, entitled Heritage, which will be their tenth.

First, it will be released on September 20 by Roadrunner Records. Second, it was produced by the band’s vocalist/guitarist Mikael Åkerfeldt and it was mixed by Steven Wilson (Porcupine Tree) and Åkerfeldt.  Third, Travis Smith (who has created many other Opeth covers) worked with Åkerfeldt to create, design and execute the album’s artwork.

Fourth, Åkerfeldt had a few things to say about the album: “It will be our 10th album/observation. I dig it; we all do. In fact, it feels like I’ve been building up to write for and participate on an album like this since I was 19.” He also had some intriguing things to say about the music — which we’ll quote for you after the jump.

“It’s quite intense at times in some ‘old’ murky way, and quite beautiful and stark at times, if I may say so myself. It’s obvious I’m going to say nice things about it since I wrote, basically, the whole piece, but I guess it will raise a few eyebrows and it certainly is an acquired taste.

I think you’ll need a slightly deeper understanding of our music as a whole to be able to appreciate this record.

“I’ve realized my influences for this album are so diverse that I can’t really say what it sounds like. If I can compare it to any other band, it would have to be Opeth, but it’s different from the stuff we’ve done before. I’ve listened a lot to Alice Cooper for the last year, yet I can’t say it sounds like ‘No More Mr. Nice Guy’.”

“I hope you’ll like it once you hear it.”

I hope I will like it once I hear it, too, though I’m pretty sure I will, since it is Opeth and all.

I also used to like Alice Cooper, but it’s still something of a relief to hear that Heritage will not sound like “No More Mr. Nice Guy”. That certainly would have raised a few eyebrows. Would have made me kind of opathetic about the album release. Actually, I would have been oppalled if that had been true.

Fifth, here’s the track list for those of you who are able to glean hidden meanings from such things. Without the music, I’m afraid they’re just words to me.

Sixth and finally, Opeth will embark on a seven-week, headline tour of the U.S.  Dates will be announced soon.  I think this news, standing alone, qualifies for a hearty FUCK YEAH! Really opic news, don’t you think?.