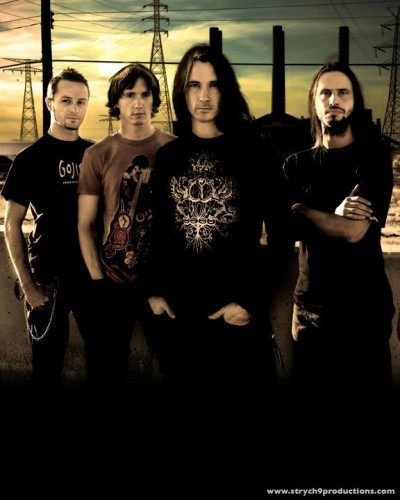 Thanks to Metal Injection and The Number of the Blog, both of whom just wrote about the following delectible pieces of news in posts I read almost simultaneously. Both of them were getting their info from an interview that Joe Duplantier of Gojira gave to Metal Hammer (which can be found here).

First, Devin Townsend and Fredrik Thordendal (Meshuggah) are not the only artists who will be making guest appearances on the new Gojira Sea Shepherd EP. Those two joined Gojira on the first single from the EP, “Of Blood and Salt”, which we featured here. In addition to them, Duplantier revealed to Metal Hammer that the EP will also include guest vocals by:

Second, feast your eyes on this morsel from the Metal Hammer interview:  “The Sea Shepherd EP will be followed later in 2011 by the band’s brand new studio album (“We are still composing,” admits Duplantier, “but it will come out this year, I promise!”).”  After the jump, a few more excerpts from the Metal Hammer interview, including what Duplantier says about the music on the next album.

As everyone probably knows, Gojira is donating the proceeds from the sale of teh forthcoming EP to the environmental organization for which the EP is named — Sea Shepherd — and Duplantier had this to say about the organization:

“Sea Shepherd is a group of activists, fighting for the environment,” he states. “I saw a movie called Sharkwater a few years ago and I was surprised to see the guy from Sea Shepherd appearing in the movie and that’s where I heard about them. They don’t have much media exposure. They work only with donated money from people. They receive no funding from governments or anything like that. Their leader is Paul Watson. He was one of the co-founders of Greenpeace back in the early 70s. He wanted to be more active, like Greenpeace were originally, so he goes out to sea to protect the whales and sharks. He puts himself in danger, getting between the ships and the whales. It’s like a hardcore Greenpeace!  They’re basically the only organisation that take action in that way. Paul is risking his life and dedicating his life to the cause of the ocean.”

“Since I was a kid I’ve been completely fascinated by whales and dolphins and everything that goes on  below the surface in the ocean,” he says. “70 per cent of the planet is covered by water and most living things are in the ocean, you know? The way we fish and the way we dump trash is destroying the oceans. Whales are so intelligent and peaceful, but we’re killing them. Hundreds of species have disappeared. If it happened in a forest it would be completely shocking, if we hunted in the same way that we fish. This stuff really matters.”

About the new music Gojira is planning to unveil on the next album:

“It’s Gojira but wiser and heavier,” says the singer. “Our music is always evolving. I hope there is more to come from us! I believe we can get heavier and deeper and more magical than before. I respect everything that’s been done before, but I hope we’re digging in another direction. It’s not a technical direction. It’s a more spiritual direction. I think we’re getting closer to the core of why we’re doing this music. It’s hard to describe it. Until I hear the new album it’s hard to have a clear vision of it. Fuck it, it’s just better!”