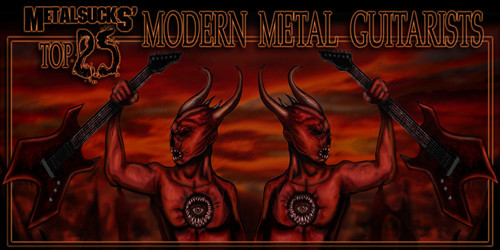 Apart from one glancing reference, we haven’t posted about the list that MetalSucks has been rolling out of “The Top 25 Modern Metal Guitarists“. That’s not because we weren’t interested. To the contrary, if you’re a metalhead like us, at least two things are likely to be true: (A) you’re a sucker for lists, and (B) you’re a sucker for guitar wizardry.

No, the reason we haven’t posted about this list before today is because it just seemed more efficient to wait ’til the list was complete and then provide the whole thing at one time. The list was finished yesterday, crowned by David Davidson of Revocation — and congratulations to him.

I think one of the reasons most metalheads like lists is because they like to argue, and lists provide great fodder for argument. Usually pointless and unproductive argument, of course, but who says an argument has to be meaningful to be entertaining? Recognizing that aspect of our culture, I’m reproducing the MetalSucks list after the jump and inviting a big argument. If you like, you can also go over to MetalSucks and cast your own vote for the Top 25, because now they’re running a reader’s poll.

So, first, we need to provide the MetalSucks editors’ list. I’m including links to the MetalSucks posts explaining/justifying each pick. Bear in mind that this list was limited to people who’ve recorded music within the last 5 years.

I really don’t have any serious bitching about who’s on this list. I have some questions about some of the entries, such as Synyster Gates and Jerry Cantrell, but that’s only because I don’t listen to the performers enough to have an opinion. Apart from those few questions, I think this is a damned good list of modern metal guitarists.

Now, saying it’s a good list doesn’t mean it’s the same list you or I would put together. You first have to ask yourslf whether there are other people who belong on this list but were omitted in favor of someone perhaps less deserving of the recognition. Then you’d have to consider whether the people on there are listed in the right order. These are the kinds of questions that can generate a good argument.

The MetalSucks editors themselves named some prominent candidates for people who could easily have been on this list but weren’t: Devin Townsend, Paul Masvidal (Cynic), Paul Waggoner (BTBAM), Marc Okubo (The Faceless), Matt Pike (High On Fire).

And what about Ihsahn, Alexi Laiho (Children of Bodom), Kurt Ballou (Converge), Christian Muenzner (Obscura), Erik Rutan (Hate Eternal), Luc Lemay (Gorguts), Arve Isdal (Enslaved), or Michael Amott (Arch Enemy, Carcass), to name a few others? No place for any of them on the list at all?

And as for the ranking, that’s definitely debatable. I’m having trouble swallowing Paul Ryan as low as No. 25 or Brent Hinds as high as No. 3 (though I do agree he belongs on the list).

So there you have it. Anyone want to argue about this list?