Well here it is, the latest and much-hyped release by Michigan melodic death metal heavyweights The Black Dahlia Murder. And let me tell you now, it seems the hype may well be fully justified. This is indeed a stunning album, all its parts fitting seamlessly, all its cogs and gears working in perfect synchronicity. Ignore those who claim that this is a sequel to Unhallowed – it isn’t. That’s a woefully limited view of things. Though those people may wish to believe that statement, having never got past the simple pleasures offered by the group’s debut, in truth this record serves to drastically further the progress that the band have shown ever since their inception.

With Ritual the group deliver an ambitious expansion of the sound of Deflorate, whose more overtly melodic twists and turns were themselves an expansion of the renewed focus and extremity of Nocturnal (still their best for me), which in turn expanded on the mix of hooks and crushing brutality found on Miasma, itself a clear step forward from the (relatively) primitive song-writing and tenebrous melodies of their debut. The lines of progression and growth are clear, and while the record remains tied to the sound that began with Unhallowed, it is far more than a rehash of old ideas, far more than a return to older times. It is a new vision that retains the identity of the old while looking boldly toward the new.  (more after the jump . . .) 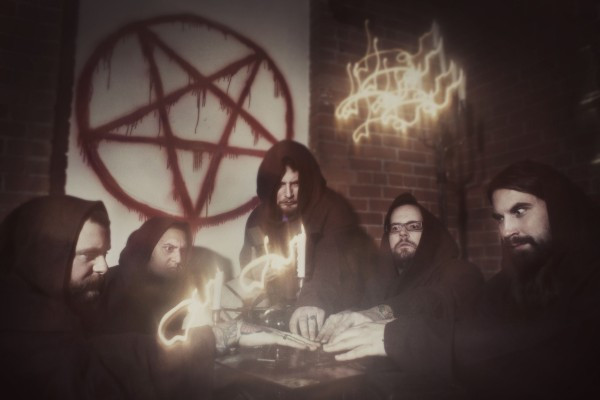 The greatest strength of The Black Dahlia Murder throughout their career (apart from their stunning, warp-speed playing) has been their ability to maintain their unmistakable core sound and identity whilst also expanding their remit time after time. Some truly new nuances can be found right from the off, the weeping strings (violin, viola and cello) that foreshadow opener “A Shrine To Madness” the first whisper that change is in the air. When it finally explodes into life the song immediately puts me in mind of the latest Belphegor album (vomitous Latin incantations and all), with its oppressively dark riffs and warp-speed blasting layered with truly evil blackened harmonies and sickeningly guttural vocals.

The strings return on album closer “Blood In The Ink” as well, bookmarking the record with a sense of dark, classical grandeur that perfectly matches the scorching black metal influenced assault of these two tracks. The latter track in particular showcases the broadening and branching nature of the band’s compositions on this record, erring on the blackened side of things and conjuring a bleak and forlorn aura of crushing, inescapable despair to match the inhuman ferocity of the musical assault.

Other songs err further on the side of death metal than we have heard in a while, the crushing post-Floridian stylings of songs like “On Stirring Seas Of Salted Blood” and “Malenchantments Of The Necrosphere” breeding hate and misanthropy through their grinding, bone-gnawing arrangements of crushing, ballistic riffs and relentlessly hammering drumming. Massive, ritualistic chants and abyssal gutturals abound throughout, Strnad plumbing the depths of his own bitter soul to achieve new lows of brutal, flesh-crawling vocalisations. The rest of the band lock together into a terrifying machine of bulldozing, mechanised force and harsh, angular edges, bruising and pulverising the innocent listener with unforgiving brutality. 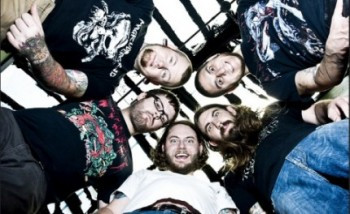 A particular joy comes from seeing how even the songs which are formulated in a more traditional Black Dahlia manner have benefitted from a variety of new influences and nuances, much of the credit for which must be given to Ryan Knight, whose twisted, post-Arsis melodies add an almost sexually charged darkness and potency to the band’s core sound. The storming “Moonlight Equilibrium” builds a wall of sharp-edged riffage accented by Shannon Lucas‘ energetic drumming, its hypnotic chorus shifting gears from a speedy, harmonically inclined assault into an Arsis-esque grooving melodic monster with ease.

The screeched intro of “Conspiring With The Damned” will doubtless incite mayhem live, the song engaging ramming speed right from the off. As well as the expected (yet never predictable) array of serrated riffs and precision blasting, the song also introduces a more prominent sense of horrified ambience, the mid-section in particular featuring a drawn out, pained lead whose minimalist notes are teased and tortured to great effect, along with eerie layers of whispered vocals and an overall sense of slowly building dread.

The bands’ love of perception-altering chemicals is exposed in “The Great Burning Nullifier”, a ritualistic prayer of cathartic anguish whose steady, malevolent momentum is punctuated by mind-numbing blasts of extreme fury, while the sheer melodic nous of “The Grave Robbers Work” sees the band delving yet deeper into the unending well of post-Dissection blackened melody from whose water they draw so much of their inhuman life and unspeakable darkness.

All these tracks take the basic formula that The Black Dahlia Murder has perfected over the years but expand and reshape it, adding new elements and finding new, as yet unexplored avenues within their sound. This sense of growth and refreshed sense of direction has also given each member an individual shot of adrenaline and creativity, pushing each to renew their efforts and dedication to be the best. Of all of them, it is probably Strnad who has changed least, continuing to deliver a shocking array of screams and grunts that are both inhuman and instantly recognisable. This is not to downplay his achievements; though little has changed overall, his pitch-perfect screeches and monstrous growls retain their distinctive character and power throughout. The man is a multi-talented, multi-faceted vocalist who deserves greater recognition for his frankly quite staggering talent and dedication to delivering catchy and unholy extreme metal anthems.

Long standing members Ryan Williams (bass) and Bryan Eschbach (guitar) go to great lengths to demonstrate that they have not rested on their laurels between releases, pushing both their technical and compositional skills to new heights. Again, restraint and atmosphere have become key elements in the sound of this record, the rumbling bass lines and whiplash riffing twisting and turning with a new, revitalised sense of depth and dynamic. The growling bass tone of Ryan Williams throbs and pulses with prowling menace, filling out the sound with both creeping subtlety and earth-shaking, rumbling power, while Eschbach peels off riff after bone-grinding riff, solo after flesh-flaying solo, with shocking, ungodly ease and skill. As The Black Dahlia Murder’s chief writer, so much credit for the expansion and branching of their sound must go to this man, an under-appreciated guitar talent who clearly desires rewarding, artistic fulfilment over the glare of the spotlight.

A perfect partner to Eschbach’s style, the presence of Ryan Knight makes a quite frankly staggering contribution to the record, his abilities meshing seamlessly with the group’s sound whilst allowing his distinct personality to shine through and prominently influence the group’s writing. His flowing, disease-ridden and infectious soloing style adds a new dimension to the record, his presence shining through with sickening clarity. His contribution cannot be overlooked in providing the band with a new fire and direction, enabling them to take greater chances and bring a new perspective to their basic formula, seeing what can be changed and expanded, where to cut and dissect the carcass of The Black Dahlia Murder and what unholy experiments can be wrought upon its still twitching corpse to bring it once more to ungodly, blasphemous life. 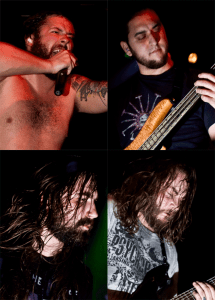 On previous releases Nocturnal and Deflorate, there was at times a concern that the sheer extremity of Shannon Lucas’ drumming would overwhelm the songs, the man’s desire to prove his inexhaustible stamina and might overshadowing the rest of the music. On Ritual, however, this concern is fully, and finally, dispelled. Lucas’ performance on this album is more complex and controlled tha ever before. He does not skimp on the extremity when it is required (and it is required a lot), as his pulverising double bass rolls and machine gun blast attacks remain powerful enough to level buildings on their own, yet his willing and intricate use of restraint and resolve enable him to play nimbly around the rest of the group, adding totally new and intelligent dimensions to their sound through his careful and confident demonstration of skill and ingenuity. His subtle cymbal work adds precise accents which can make even the simplest arrangement of beats into a more interesting and compelling pattern of playing.

This record is a mesmerising gem of an album. Every song crackles with energy and eldritch force. Every member performs with unholy precision and calculated fury. The composition of each number is a ritualistic channelling of otherworldly inspiration, drug-induced berserker fury and maddening, insistent melodies. There is such a wealth of ideas on display here, from the dark, classical aspirations that the incorporation of ambitious string and piano arrangements provide, to the simple and addictive pleasure found in hearing the band exploring the more deathly or blackened sides of their repertoire more fully and with gleeful abandon. This is a record that sees the group embracing all that it is to be The Black Dahlia Murder, without reservation, so as to expand their sound and identity, exposing their shadowed, filthy souls more openly than ever before and channelling their creative instincts more fully, without fear or compromise.

Sample song: “A Shrine To Madness”

EDITOR’S NOTE: Ritual was released by Metal Blade Records on June 21 and is available everywhere fine music is sold. For our North American readers, BDM is headlining this year’s edition of the SUMMER SLAUGHTER tour, which kicks off July 22 in Los Angeles.