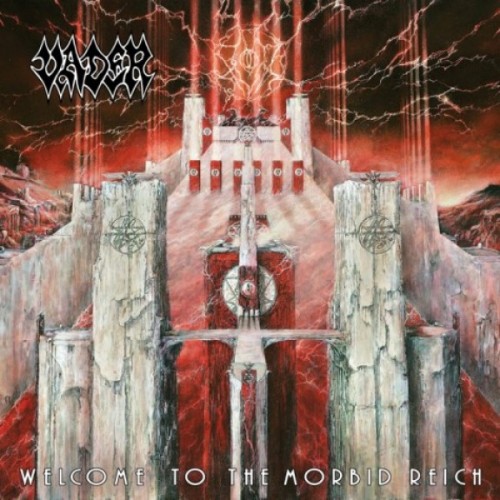 (NCS writer TheMadIsraeli reviews the new album from Vader, but I can’t resist tossing in my two cents at the end, too.)

Vader is a band I hold very dear. They were a band who captured me late in my metal history but have since become an essential staple, and a Top 10 band of all time for me.  By my lights, no one else in death metal plays with such speed and venom, while carrying it off with a sense of imperial might and regal dignity.

I’ve been looking forward to Welcome To The Morbid Reich like you wouldn’t believe. Every time this band drops a new album, they stomp out the competition, and the only members of the death metal elite who can even begin to compete are Dying Fetus, Suffocation, and Immolation. Yes, we now have Fleshgod, yes, we now have Revocation, but neither of them have the cred, the PERFECT 10+ album discography, and the musicianship that Piotr Wiwczarek and whoever he recruits into the line-up lately manage to generate. (He’s a hell of a recruiter, too. I mean, this guy had Krzysztof Raczkowski behind the kit. One of the greatest drummers extreme metal ever saw (R.I.P Doc).)

I’m here to tell you this is probably Vader’s best work since the mighty De Profundis, the thrashier onslaught of The Beast, and the cacophony of brutality that was Impressions In Blood. To sum it up for you… 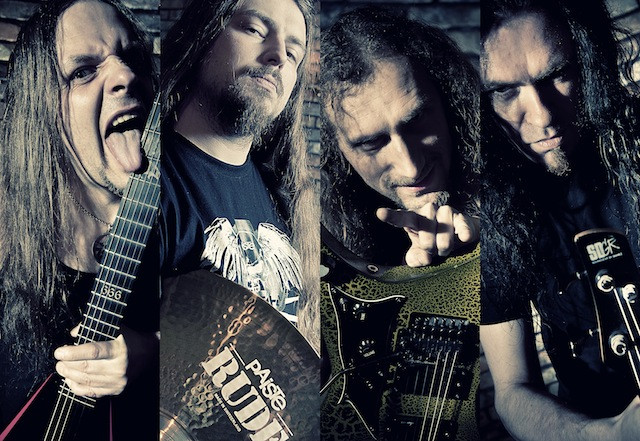 It seems a lot of my favorite albums this year continue to include kick-ass dark symphonic elements. First, Xerath’s II, then Fleshgod Apocalypse’s Agony, and now this. Opening with the majestic and foreboding synth swells of “Ultima Thule”, the album transitions beautifully into “Return To The Morbid Reich”, which greets the listener with an intro filled with the sound of total majesty. Dark, well-placed synth’s create a haunting atmosphere, and underneath, the abysmal chords ring out until the song launches into blast-beating devastation.

From this song, it becomes obvious that the new album isn’t going to serve up the more groove-inclusive action found on Necropolis, but will instead return (as indeed it does) to the crushing marches and speedy assaults of razor-sharp riffing of De Profundis. The song marches forth into what may be one of the catchiest verses Vader have ever written, one that takes hold of your soul and drives it toward whiplash-inducing madness.  It also features Vader’s trademark adoption of verses interrupted by solos, this time executed by new lead guitarist Spider, who brings a more melodic approach to the Vader sound that serves to complement the performances of the other musicians and add to the epic factor, although this might be the last thing you’d expect. 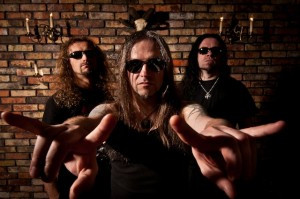 “The Black Eye” wastes no time as it continues the speed assault at its own frantic pace. Fierce fire-storming blitzkriegs of riffs and earthquake-inducing drum attacks decimate the landscape until the song hits a breakdown that churns and grinds bones and gnashes at the listener with fangs of uncompromising sharpness.

Vader promptly follows this with the album’s first single, the marching supremacy of “Come And See My Sacrifice”. Hard-hitting grooves pervade this track until its climax of human-blender-caliber blast beats, grindcore-ish riffing, and fiery solos usher you out.

After “Only Hell Knows”, the answer will be nothing. You’ll be erased from the face of the earth, left to the black abyss of the void, because hearing this song is like being ejected into space at the speed of light, with your skin coming off like a discarded suit and your bones pulverized into dust from the immense sonic pressure being generated. 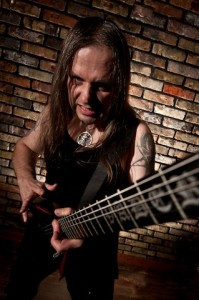 This behemoth of a flesh-blender is followed by the ominous symphonic intro of “I Am Who Feasts Upon Your Soul”. The song explodes into a soul-stealing section of epic synths and intricate, foreboding riffing, transitioning into a proud battle march of death metal might. This whole song is a mid-paced leviathan, the listening equivalent of being smashed repeatedly with an obsidian mace, chunks of your flesh gouged off, leaving you to bleed to death. I love the solo section in this song. It comes at an unexpected time and shifts the mood of the song to a more somber tone. Definitely one of the top killers on this album.

“Don’t Rip The Beast’s Heart Out”, in a way, almost feels like a sequel to the De Profundis classic “Blood Of Kingu”. High-velocity blast beats and no-bullshit brutality and straight-up headbanging action is what this song is about, especially when the song hits 1:50 and it explodes into thrashing fury out of nowhere.

“I Had A Dream” dances gracefully and basks in its own intensity as you’re graced by a blast-beat infused waltz that crushes all in its path. This is also one of Vader’s more melodic tracks, one which rings with a triumphant imperial sound. Also, as a total aside, Piotr’s new-found love of black-metal-like high shrieks has contributed effectively to the attack of his vocals. When his signature hoarse roars and those shrieking highs are layered on top of each other, it produces awe-inspiring, soul-consuming viciousness.

“Lord Of Thorns” is another blitzkrieg of speed, but it’s followed by something that truly rivets the attention — the band’s re-working of the old demo song “Decapitated Saints”. This song… is… just… like… awe-inspiring on a whole new level. Remember that speed I was raving about on “Only Hell Knows”? Well, it hasn’t got shit on this song. This song runs at 300 BPM. That’s the fastest tempo possible on metronomes. 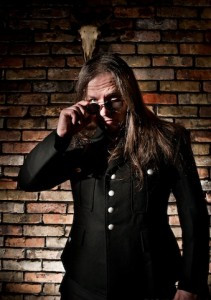 THINK ABOUT THAT. Now think about it again. I dare you to headbang to this and not suffer a brain hemorrhage. It’s one well worth earning, I assure you! This may be Vader’s crowning achievement. This is brutality PERSONI-FUCKING-FIED. DO YOU HEAR ME!? PER-SO-NI-FUCK-ING-FIED!!!!

The album closes with a feeling of impending doom introduced by “They Are Coming”, which then ushers you into the trudging victory tune of “Black Velvet And Skulls Of Steel”. I MEAN HOW METAL IS THAT NAME?! That may be one of the most badass metal song names in the last 10 years. This song dials it back to the speed of the band’s legendary plodder “Epitath”. This is a very fitting closing song and I really enjoyed the way it drew the album to its end. The riffs are heavy, melodic, majestic and powerful. The song fades out, as if to leave the listener with the vision of a ruined landscape, torn apart by the war that Vader themselves have just waged.

This is the death metal album of the year. One of the top 10 of the year across genres. GET THIS, OWN IT, AND DESTROY THINGS TO IT.

EDITOR’S NOTE: Israel grabbed this album so fast that he beat me to the review punch, but I can’t resist at least briefly throwing in my two cents, too.

Speaking of punches, this album knocked my head clean off. After the rest of me searched like a blind man, eventually finding it in my cat’s litterbox (reminder to self: clean the damn litterbox), and screwed it back on again, my first thought was that Nuclear Blast had scored a vicious one-two death-metal punch: First, they delivered the new Fleshgod Apocalypse album (reviewed twice at this site, here and here), and after that staggered us, they delivered a finishing uppercut with this stupendous and equally inimitable album.

It’s full of tremendous energy that you feel with a sense of stunned immediacy, performed with head-spinning skill, and crafted with a well-honed understanding of how these black arts should be practiced. I’ll confess that as much of a Vader fanboy as I am, I was somewhat disappointed by Necropolis. But Welcome To the Morbid Reich has “instant classic” written all over it.

Welcome To the Morbid Reich was released in Europe on August 12 and its official U.S. release will come on September 13.

6 Responses to “VADER: “WELCOME TO THE MORBID REICH””