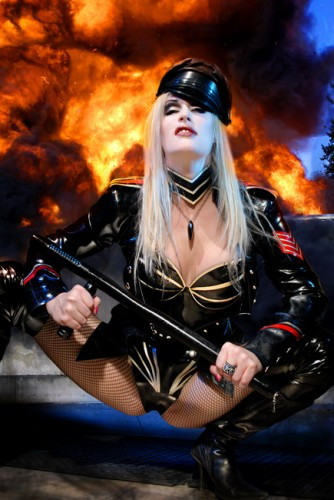 (Our guest contributor Phro draws inspiration from the most unexpected places, like the names of metal bands — and my last post about fall tours . . . and btw, the photo above has nothing to do with Phro’s post, except sometimes his writing makes me think of Genitorturers. Is that so wrong?)

So, apparently, MetalSucks is trying to out do NoCleanSinging by hosting their very own music festival.  (Copycats.)  It’s cute of them to try, but, I mean, who would you rather see?  Municipal Waste or Massive Wall of Penis?  My point exactly.  Anyway, I took a look at their line up, and I noticed a very…odd…pattern to the definitions behind the band names.  Apparently, every band in all these tours are massive necrozoophilics.  Yeah, that means liking to fuck dead animals.  Just like my uncle Billy Bob.

Municipal Waste – Where you sick fuckers go when the DOT (Department of Transportation) is clean out of dead deer.
God Forbid – What you said when your mom suggested having Fido cremated after he “accidentally” got hit by a car.
Today is the Day – What you promise yourself every morning when you wake up wondering if you’ll finally get the guts to skullfuck that mounted doe head in your father-in-law’s house.  ‘Cause you know it’s been giving you “the eye”.
Howl – What your little dead “date” will never do.
Black Tusk – When you accidentally blow diarrhea all over the elephant tusks you use as butt plugs.
Magrudergrind – The machine you use to puree dead puppies when you beat the DOT to the mess. (more after the jump . . . a lot more . . .)
Ramming Speed – The maximum of which you can only achieve when the deer torso has been split by an 18-wheeler.
Prime Evil – What you named the pick-up you use to “accidentally” kill birds when you’re getting desperate for a good lay.
Cynic – What your father became after finding out you just like fucking dead animals, and you weren’t actually collecting them for satanic rituals.
Obscura – The secret Hindi book you use to learn new positions to fuck animal corpses.  It recommends stalking highways in the mountains at night, since the best temperature to fuck a dead Bambi is about 10 minutes after impact.
The Red Chord – The sound you make when you ejaculate into the crushed chest cavity of a dead rabbit.
A Life Once Lost – What you gon’ be fuckin’ t’night!
Scale the Summit – What you would do to get a crack at that mountain goat when it finally croaks.
Fight Amp – What you use to amplify and then record the sound of your grunts when fucking a dead turkey.
Rosetta – The abbreviated name of the software program you use to learn languages so you can free-travel around the world fucking dead animals.  (You had to pay extra for the lessons on animal anatomy, but it was totally worth it to be able to accurately differentiate bull testicles from boar testicles in Finnish.)
Ultrageist – What you would probably be haunted by if animals had souls.

Well, that’s just a short festival, so not all that exciting.  Apparently, Decapitated is also on a North American Tour.  Fewer bands, but just as…ummm…gross.  You all are gross, gross, gross people.  For shame.

Decapitated – The sexiest kind of kangaroo.
Decrepit Birth – What you hope for whenever you hear your friend’s cat had kittens.
Fleshgod Apocalypse – What you nicknamed that pig you stole right off the BBQ spit to take back your house for some “alone time”.
Rings of Saturn – What your ass looks like after shoving the Black Tusks back in.
The Haarp Machine – Like stirrups for pregnant women, but with more dignity and dead rats.  Used to keep your legs and anus properly open when using a baseball pitching machine to launch dead rats into your rectum.

Just as I got this far in the list, Islander posted some more tours.  So, I guess I’m not done yet.  Yah!