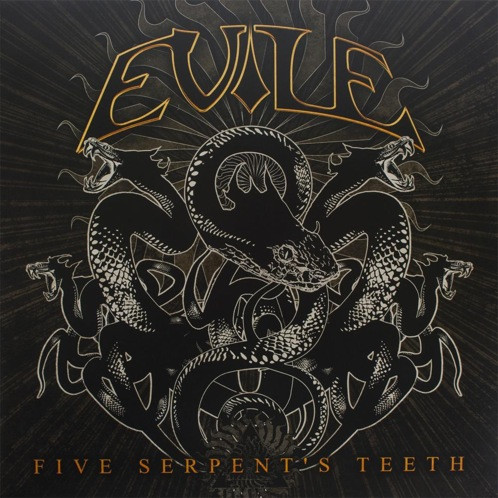 (Damn.  Unless my math is wrong, this makes TheMadIsraeli’s fifth straight review in as many days. Lest you think he cranked these out in less than 24 hours a piece, I know for a fact that he held onto these to make them more timely — and then flooded me with them, just to make sure I didn’t lay around all week like a beached whale watching TV and eating Cheeto’s.)

Alright, I know most of you NCS readers are simply not cool enough to love thrash, but THAT IS OKAY.  I will show you the way, be your Moses that leads you to the metal promised land and SHOW YOU THE ERROR OF YOUR WAYS.  I will be like Noah and part the waters of your tainted metal taste! [EDITOR’S NOTE: The author’s comment about your lack of coolness is solely the opinion of the author and doesn’t necessarily represent the official position of NCS, which generally sucks up to its readers like a $2 meth whore.]

In all seriousness though, how anyone can dislike thrash is beyond me, especially when it’s this good.  Evile already have two albums to their credit, the delightfully old school and take-no-prisoners Enter The Grave, and the technical and progressive ecstasy that was Infected Nations.  Now we see Evile returning to whoop asses again with their third outing Five Serpent’s Teeth — the only thrash album that matters all this year. 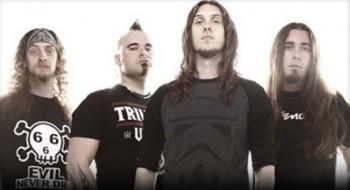 Evile has opted for a complete synthesis of the styles of the previous two albums, and this is made evident immediately in the opener “Five Serpent’s Teeth”.  It unfolds with a fading-in, massive wall of guitar harmony, eerie, foreboding, sinister, and slithering.  You’re blasted in the face with desperate immediacy by fast, tight, technical riffing and vocalist/guitarist Matt Drake’s powerful voice, blending traditional thrash shouts with real melodic singing, but with extreme force behind it.  You’re officially sucked in from the start, and the album will never relent for its entirety.  NEVER.  FUCKING.  RELENT.

But of course, you need confirmation that that last statement is in fact the truth.  Don’t worry, “In Dreams Of Terror” will show you who’s boss by shredding you to pieces with its lightning-speed riffing and gravity-intensifying stomps.  Other songs such as “Cult” provide a rock-solid, mid-paced swagger, full of thrash attitude and dark leads.  “Eternal Empire” provides eerie melodies and sinister riffs with tempo changes a-plenty.  With that song, you’ll be assaulted by so many quality riffs and shredderific, god-like solo’s, thanks to modern guitar legend Ol Drake, and have had your soul ripped to shreds by Matt Drake’s powerful voice, that you’ll probably be left wondering, “Can this goodness continue for 6 more songs?”

Well, “Xaraya” offers something of a respite.  A heavy number with a plodding march, featuring eerie vocal lines until half-way through,when the song builds in intensity, increasing in speed, ending in an onslaught of double-bass and ballsy riffs.  The album then kicks back into full-on high gear with “Origin Of Oblivion”.  This song will fuck you up, chew you up, spit you out, and blend your remains into a fine liquified mixture composed largely of entrails.  Speed, speed, more fucking speed and MORE FUCKING FUCK FAST SPEED!  This song is my personal favorite, it just gets the blood boiling and the killing instinct thirsting.

“Centurion” is probably the most evil song on the album and also the slowest, next to the all-clean ballad “In Memoriam”.  Both of these are quite good songs, as are the final two, “Descent Into Madness” and “Long Live The New Flesh”, which are absolutely scorching riff-firestorms full of balls and attitude.  “Long Live The New Flesh” closes this album out wonderfully, leaving you wanting more, the true sign of an album that just whooped your ass.

This is high-quality thrash metal from top to bottom.  Of course, as a guitar-player myself, I can’t help but love this album. The riffs are so top-notch, the solo’s so top-tier, it’s impossible for me to be objective.  But for what it’s worth, I’m utterly convinced that this album overall kicks ass.  This is a top 10 of the year album for me, gauren-fucking-teed. Songs to follow, including the official video for “Cult” . . .

EDITOR’S NOTE: Five Serpent’s Teeth will be released by Earache Records in North America on October 18 (and is out in Europe already). According to press reports, the album is conceptually derived from the dreams of Matt Drake and heavily influenced by the passing of the band’s former bassist Mike Alexander. The eye-catching album art is by Gustavo Sazes, who was also responsible for the cover of Nightrage’s new album, among others. For more info about Evile, you can use these links:

And now here’s the music, including Evile’s official video for “Cult”. And at the very bottom, we’ve got Evile’s cover version of Nirvana’s song “Lounge Act”, from their legendary 1991 album Nevermind. The cover was part of Kerrang! magazine’s special anniversary issue to commemorate 20 years since the release of Nevermind. Fuck. Yeah.