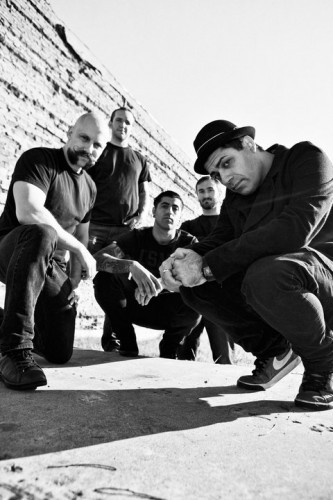 (TheMadIsraeli confesses to a guilty pleasure.  The jury is deliberating his sentence.)

Ok… we all have guilty pleasures, right?  I’m not the only one, right?  Inside all of us is that total douche who listens to Circa Survive and masturbates to his poster of “The Rev” directly across from his bed TO SOME DEGREE OR ANOTHER.  Right?  You do that, don’t you?

So at the risk of losing all respect and reverence (begging the question how much I had to begin with), I present to you: Guilty pleasures.  So who is my band of choice for this first installment?

So, who is Death By Stereo?  Well, the band started out as a hardcore punk outfit, but guitarist Dan Palmer joined them, and after 2 albums they apparently decided that the hardcore punk sound sucked on its own and decided they needed to re-vamp themselves.  After the band decided to take a small break and regroup, they unleashed their third album, Into The Valley Of Death.  Suddenly, they were taking the sounds of punk, thrash, hardcore, melodeath, metalcore, and pop and mixing them together into one cohesive sound.  I mean, just look at their list of primary influences. (after the jump . . .)

Yeah.  That’s a diverse array of shit, to say the least.

The only consistent members of this band since circa 2003 have been vocalist Efrem Schulz and Dan Palmer.  They are essentially the masterminds, you could say.  Efrem Schulz combines death growls, punk yelling, and purposefully not-quite-on-key clean vocals to maintain the punk atmosphere.  I LOVE this band because whether you like them or not, they have a truly unique sound going for them.  NO ONE sounds like DBS, no one.  Music below.  Laugh at me all you want.

27 Responses to “GUILTY PLEASURES NO. 1”