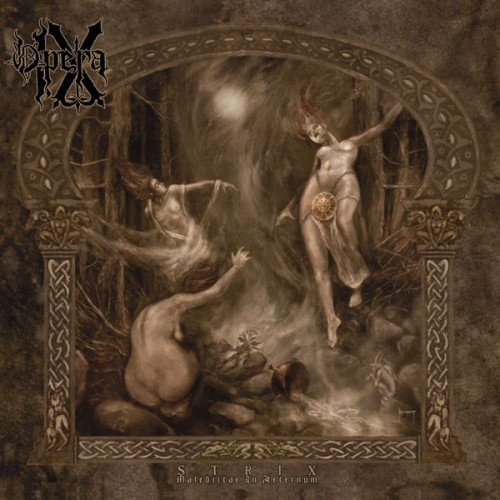 Opera IX is a symphonic black metal band from Italy who’ve been around since 1989, which makes them . . . survivors. On January 24, 2012 in Europe and February 28 in North America, Agonia Records will release their first studio album in 7 years — Strix Maledictae In Aeternum. The new album is described as the last in a trilogy of records that explores witchcraft.

I’ve heard a bit of Opera IX music in the past, but it came from the days when Cadaveria was fronting the band, and I’ve heard nothing since. But curiosity about what had become of their post-Cadaveria sound led me to watch an official video that was released in early November for a song from the new album called “Mandragora”. I’m including the video after the jump (because it’s NSFW), and featuring it here for three reasons.

First, I enjoyed the song. It reminded me of Satanica-era Behemoth, an imperial mix of black and death metal. Second, I was surprised to see that the video is hosted on YouTube, because it features copious nudity. And then I saw the little notation on the YouTube page: “This video has been age-restricted based on our Community Guidelines.” I’d never actually read the Community Guidelines, and I wondered why the video was available with an age restriction rather than being banned altogether.

So, here’s what the Guidelines say about Sex and Nudity: “Most nudity is not allowed, particularly if it is in a sexual context. Generally if a video is intended to be sexually provocative, it is less likely to be acceptable for YouTube. There are exceptions for some educational, documentary, scientific, and artistic content, but only if that is the sole purpose of the video and it is not gratuitously graphic. For example, a documentary on breast cancer would be appropriate, but posting clips out of context from the documentary might not be.”

Well, this really was not terribly helpful. True, the Opera IX video uses nudity for “artistic content” — the song is about witchcraft, and I suppose there has always been a component of feminine sexual power in the idea of witchcraft (though I’m certainly no expert). On the other hand, an argument could be made that it’s “gratuitously” graphic — and I sure as fuck found it to be sexually provocative. Which is the third reason I’m posting it, of course.

By watching this video, you hereby certify that you are old enough not to be traumatized by female breasts and pubic hair. This age varies from person to person.

(By the way, the album cover, which features nude witches, is by Kris Verwimp (Enthroned, Marduk).