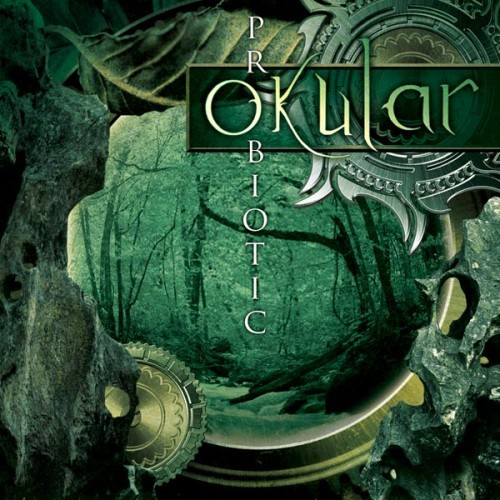 Okular don’t fuck around. When they contacted us asking if we would consider reviewing their debut album, Probiotic, I said yes and suggested they could just give me a download link rather than going to the expense of mailing a physical copy from Norway. They sent me the physical copy anyway. When it arrived, I understood why.

The jewel case includes a 20-page booklet. You’re looking at the front cover above, which by itself is strikingly cool. You open the booklet, and what unfolds are a series of two-page panels of equally eye-catching artwork, with green being the dominant chromatic tone throughout. The first two-page foldout includes band photos and detailed album credits. Each of the remaining two-page panels is devoted to a single song, with lyrics.

I read the lyrics and stared at the accompanying art before listening to a single song. The artwork for each song is symbolically connected to the lyrics, which are a kind of very personal poetry that chart a journey of self-realization and that provide a description of beauty and strength (the kind that matter, not the superficial), both within the self and outside the self in the world. When I use the word “poetry”, I don’t mean to suggest that the words are pretentious or “precious” — they aren’t. But the words are still deeply considered and deeply felt and eloquent.

The very personal nature of the lyrics, the consistency of thought among them from song to song, and the connection between the lyrics and the art are the result of the creative work of a dude named Andreas Aubert, who composed the music, wrote the lyrics, and was involved in developing the design and illustration concepts for the album booklet. And he also sings backing vocals on the songs. And he has an interesting personal blog you can find via this link.

Ah yes, the songs — the music. It’s time to write about that. I’m just taking this in the order of my own experience — I read the lyrics and looked carefully at the booklet first, and then I pressed play. And what I heard was nothing like what I expected. 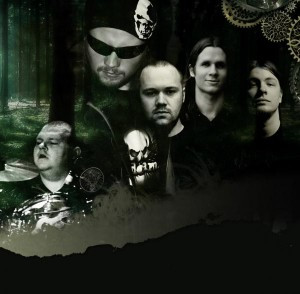 The music is an utterly head-scrambling blast of progressive death metal that brings to mind a gene-splicing of Spawn of Possession, Blotted Science, Black Dahlia Murder, Gorod, Death, Nevermore, and even a few chromosomes of Dimmu Borgir.

Every element of the music is multi-faceted. The guitar work is a showcase of technical wizardry, packed with a multitude of tones and intricate layering and counterpoint. From punchy rhythmic grooves, to down-tuned stomps, to leads that squirm like a nest of snakes or pulse like your jugular during an adrenaline rush, to clean solo’s that vault and tumble like aerial acrobats on fire, the fretwork is almost always jaw-dropping.

The vocals are equally varied, with barking gutturals, abyssal roars, acidic shrieks, demonic chants, the sounds of a choir, and even brief appearances of clean vocals on “Fuck Your Dignity”, all sharing time — and all the styles are rendered effectively.

The song construction sometimes produces the feeling of a musical firehose having been dropped by panicked firemen and left to whip wildly around the pavement, propelled by its own force. The music bolts and jolts, sometimes throwing the listener off-balance by coming to a full stop — before exploding again in another frenzied display of instrumental pyrotechnics. You get riffs that jab like a fighter or rumble like a locomotive, flashy chromatic scales, tremolo leads combined with blast-beats, acoustic interludes, and even a bass solo paired with a jazz-style drum fill on “Choose To Be Free”. 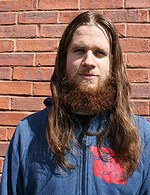 Mercifully, the break-neck pacing and mind-bending freedom of the music are interrupted by two classically styled acoustic instrumental tracks (“Tranquillity of the Night” and the playful “Celebration”), which last just long enough for you to catch your breath before this freaked-out death metal hurricane starts roaring again.

But make no mistake — notwithstanding the flashy intricacy of the music and the overflowing bombast of a hundred things happening at once, the songs really are songs, each one with a distinctive melody flowing through it, diving and then surfacing again.

In short, Probiotic ranks among 2011’s most impressive offerings of technical/progressive death metal — highly recommended. Here are two tracks from the album for you to check out:

Probiotic can be ordered from Regenerative Productions at this location, which provides worldwide shipping. Free downloads of three songs from the album are also available at the same location.

Okular is starting to get the attention they deserve. Among other notices, our brothers over at Death Metal Baboon featured this album before we did, giving it a score of 9.5 out of 10 (here), and Norway’s SCREAM magazine just named Probiotic their Album of the Month for December. Okular are already recording their second album, on which the vocal duties will be shared equally by Marius Pedersen and Athera, who sings with Susperia and Chrome Division.

And, to wrap this up, here’s one of the two-page panels from the CD booklet. This one’s by Isis Sousa. 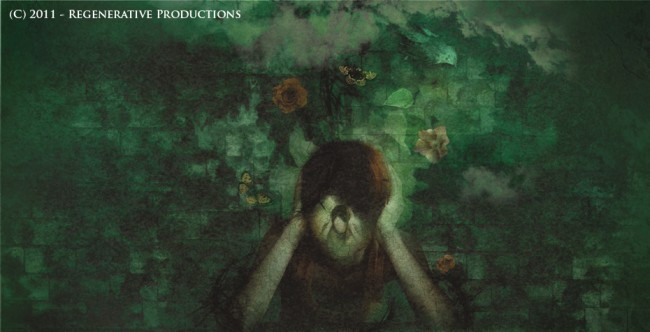