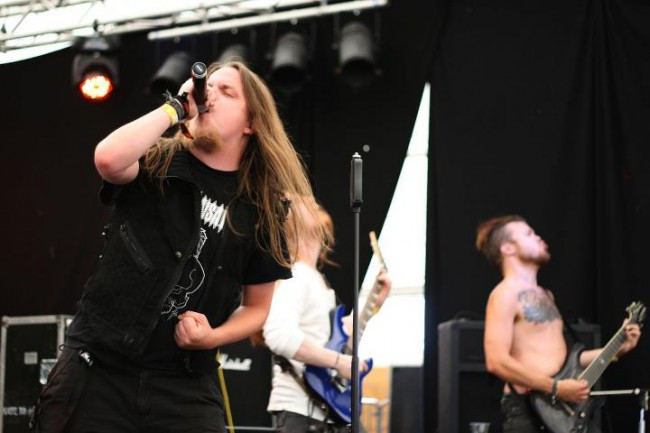 (The musicians I invited to submit year-end lists were people whose music I liked a lot and who I thought would bring interesting perspectives to our look-back on 2011 metal. Here’s the latest offering, from the vocalist of Sweden’s Canopy, Fredrik Huldtgren, with whom I had the pleasure of spending some time in Seattle last month. If you haven’t yet introduced yourself to Canopy’s music (for example, by reading one of the jillions of our posts about them), it can be streamed and purchased on Bandcamp here. Canopy is at work on their fourth album – may it come soon!)

9. Primordial – Redemption at the Puritans Hand

I must admit, I am quite a bit of a Primordial fanboy. That being said, this album actually took me quite some time to get into. It is a rather slow album, and it does not feel as harsh as their previous efforts. The passion is still there though, stronger than ever, but I feel that now more than ever, Primordial is a band to see live, because that is where it all makes sense.

Again, a band that does repeat themselves quite a bit, but they still manage to release albums of such high quality that they deserve a place on my top list. Featuring a guest appearance of Bethlehem’s old vocalist does add a few bonus points, but even without that, the album is both brutal and catchy and all very Anaal Nathrakh.

Last Easter when Septic Flesh released a teaser for the new album, “The Vampire of Nazareth”, I was not very impressed. The song seemed to go nowhere and lacked something special. So it was first when I saw them live that I ended up picking up the new album (the artbook actually — apart from the CD, it also contains a “making of” DVD plus another CD with only the symphonic parts and 40-50 pages of high gloss versions of Seth’s artwork), and once I was able to listen to the album in its entirety it started to make sense. “Mad Architect”, “Pyramid God”, and “Rising” are all great examples of how good they can be when they want.

6. Amorphis – The Beginning of Times

Amorphis is one of those bands that can do no wrong. Once again they managed to release an album with great melodies and vocal work. Even though many may complain that the album sounds too much like the previous ones, I still think they are keeping such high quality that it does not matter.

Probably the biggest surprise for me this year. Skálmöld was booked for Wacken and as I was going through what I would see, I ended up listening to a few of their songs. Being a bit of a folk metal fan, I rather enjoyed it and decided to try and see them. Once at Wacken they turned out to be the highlight of the festival. A brilliant band with seriously catchy folk metal songs. Even those of you who might not enjoy the recent influx of folk metal should check this out!

France seems to be the new Norway when it comes to black metal. I chose to couple these albums as they were both released this year, and they are parts 1 and 2 of a trilogy. (The entire trilogy was supposed to be released this year, but sadly enough not all parts were released). Sect(s) is an insane and chaotic black metal album which takes a few listens to fully appreciate. Interestingly enough, Desanctification does start off just as sect(s) ended, but then mellows out. Even the artwork for Desanctification has a more hippy feel to it, and once “Epitome X” rolls around you understand why. Personally I cannot wait until the third part comes out so that I can listen to it from start to finish. I do believe that that is how it should be enjoyed.

Perhaps the least metal album on my top list, but one that I just could not exclude. This album is pure brilliance with a lot of clean vocals, original song writing and great melodic work. If I was more of a writer perhaps I could try and do it justice, but instead I suggest that you listen to it. All of it.

This album was scheduled to be released in January 2012, but with the death of front man David Gold, Earache let people download it for free. I started listening to WoY around the release of their second album and have been hooked since. The musical changes that went from Woods I -> Woods IV are huge, the latter album being closer to Type O Negative than anything resembling black metal, but never once did they release a bad album. Woods V is a serene and depressing album, more so than what WoY usually are, and one can’t help but see connections between the lyrical contents of the album and Mr. Gold’s untimely death. I never met him in person, but over all these years we always kept in touch and it saddens me to see such a talented and passionate musician leave us. So if any of you are feeling down this winter, put on some Woods of Ypres and let everything overwhelm you. R.I.P. Dave, we won’t keep you out of sight or mind, but we will kiss your ashes goodbye.