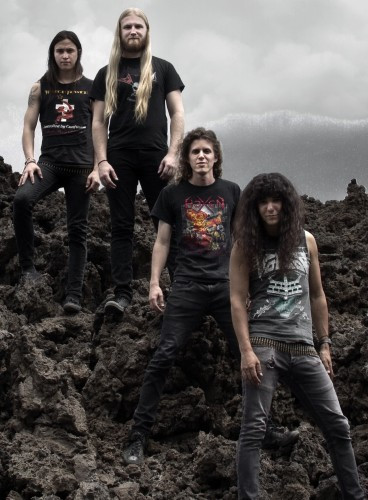 (Want to know where Vektor’s unique sound comes from?  Want to know which sci-fi works figure importantly in Vektor’s creative process?  Want to know about a major geographic relocation for this band? Then read BadWolf’s interview of the band’s main man David DiSanto.)

BW: Let’s start easy: For anyone who has not heard it yet, describe “Outer Isolation” in your own words, for us.

V: “Outer Isolation” is a sci-fi, progressive, technical, thrash odyssey through realms of thought and space. It’s a high speed, aggressive journey that goes into the uncharted depths of the beyond. It’s a personal story of thoughts and philosophies that I experienced during the writing process. It’s not really a concept album, but there are a lot of similar ideas that coincide like delving into philosophies of the mind and self-exploration. The music is based around technical thrash metal, but with an emphasis on taking the genre into new territories. The production sounds new and fresh without being over-produced, which we think is important. We’re all really happy with how it turned out. It has a great feel of being extremely fast and aggressive, while maintaining precision and clarity. It’s a little difficult to describe in words because it’s pretty different from most other albums.

V:  Well, it’s pretty time consuming. Sometimes songs come together in just a couple weeks while others may take several months. There’s not a formula or anything that I follow when the songs are constructed. Up until now, I’ve been the one who writes all the songs. They’re all just creations from some abstract realm of thought that my brain exists in, haha. All of the songs are very riff-oriented, and that’s how they start. I just play guitar for hours or days until I think up a cool riff and the song takes off from there. I think about what the riffs sound like, usually something strange or space related, and try to build a sonic atmosphere to whatever visions are conjured up in my head when I play them. It’s basically a lot of one on one time with my guitar and my thoughts. After I come up with a general song structure, I show it to the other dudes in the band and they all incorporate their ideas and playing styles to form the Vektor sound. I usually write the lyrics after the music, but it all depends on what type of inspiration is striking at the moment. 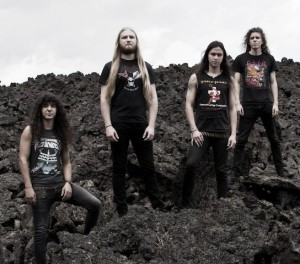 BW:  What was the biggest challenge you faced between the release of “Black Future” and “Outer Isolation”?

V:  We did want to top what we did with “Black Future”, and that was actually the hardest part. We realized how good “Black Future” was once we started recording “Outer Isolation”. The biggest difference, I think, is the performances on both albums. We really spent a lot of time tracking all the instruments on the new album, at least more time than on “Black Future”. We wanted a super tight album. We also wanted to make the production a little better too, but that’s a fine line for us. As I said earlier, we didn’t want it to be over-produced. Most of us like old-school thrash and black metal, and those are the recordings we’re used to. Our sound is a little too complex though at times for a rougher sounding recording. I think we got exactly what we were going for.

BW:  I’ve never heard a band that sounds quite like Vektor. Obviously there are clear-cut influences—Voivod is a frequent comparison—but even that’s a loose touchstone. How did you develop your unique style?

V:  Thanks! There’s actually a lot to that question. I originally wanted to start a band that was a mixture of Destruction and Voivod. I’ve also always been a fan of really epic songs like 2112 from Rush, or some Yes and Pink Floyd songs. I’m a huge fan of black metal too. Emperor, Absu, and Immortal have been my favorites for about 15 years now. The Vektor sound evolved from the combination of all that: thrash, prog/art rock, and black metal. The reason why we are different is because we’re not trying to copy anyone else. There’s a difference between having influences and blatantly ripping off other bands.

BW:  Are there any other directions you’d like to experiment, either in the context of Vektor or another project?

V:  No, I’m completely content with Vektor because it already has all of the elements of music that I enjoy. I’m sure we’ll evolve a little over time, but the fundamental roots of our sound will never change, just grow. 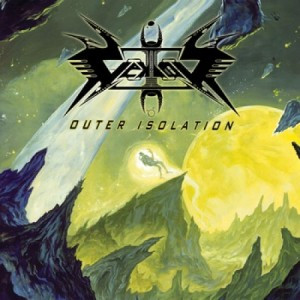 BW:  You stand out in Heavy Artillery’s roster—I don’t know of any bands on their roster that approach your technical acumen except perhaps Exmortus (who you toured with, I was furious to miss it), and your peers are known for shorter songs as opposed to Vektor’s 10 minute plus epics. How did you come to be a part of that roster?

V:  Exmortus was the band that helped us gain access to Heavy Artillery. We were trying to get signed for a couple years, but I think most labels were afraid to sign us because we were so different. We played a few shows with Exmortus in California and became good friends with them. They knew we were looking to get signed so they gave a good word about us to Heavy Artillery.

BW:  Vektor’s lyrics and aesthetic focus on science fictional elements—even the logo looks like circuitry. Where does that focus come from on a personal level, and what makes it so compelling for Vektor? Are there any particular works of sci fi or speculative fiction that you find important, or personal?

V: I’ve been a huge fan of sci-fi movies from birth. It started out with Star Wars and Mad Max and grew from there. I’ve always liked futuristic looking things: space ships, circuitry, etc… I tend to be attracted toward things that make me think. That’s why I like sci-fi. Blade Runner has always been an important film for me because of the philosophy and ethics within it. There’s always a lot of social commentary in a good sci-fi film or book. I relate to that because I spend a lot of time in deep thought about philosophy and science. I try to incorporate personal and human experiences to abstract theories or strange phenomena within our universe in the songs we play.

BW: So you’re taking “Outer Isolation” on the road. What are you doing differently this tour? What can fans expect from a Vektor show in 2012?

V:  We’re all excited to play the new songs, but we’ll throw in some old stuff too from “Black Future”. It’s kind of hard to fit in a lot of songs because we’re usually only allowed about 30-45 minutes for our set time. That doesn’t leave much room when a good number of our songs are over 10 minutes, haha. We probably won’t do too much differently. We all just like to have fun at shows and talk to all our fans. Everyone can expect a headbanging, good time! Who knows what songs we might play, because we’ll probably switch it up a little every night. We try to stay tight with all our songs, so any requests are welcome if we have time. 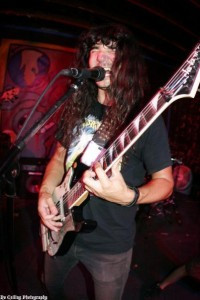 BW:  What are Vektor’s goals for 2012, and how do you plan on achieving them?

V:  We want to tour in Europe before the year’s over. However, we are moving to the East coast in the spring. That will delay our tour plans for a little bit until we get situated over there. We’re thinking about Philadelphia, PA as a prospect. We’ve already had several offers to tour in Europe, but we’ve been unable to afford the plane tickets every time. Even though I would hate to leave Heavy Artillery, I think a bigger label with more money will have to pick us up before we can start touring overseas. Don’t get us wrong, Heavy Artillery has been absolutely fantastic and we’re good friends, but we do want to be able to afford the good offers that come our way. That all said, we have to focus on moving to the East Coast first. We’re all ready for a change of scenery and we want to start melting minds in the East Coast scene.

BW:  Oh! one more. Dave, your vocals are… out of this world (lol). How do you DO that? Is it an aerosol container filled with helium and tear gas!? Give us some insight, please.

V:  I attach a face-hugger to my throat every time I need a little octave boost, haha. Nah, I don’t really know. I just push really hard from my diaphragm and only use the top part of my vocal chords, the part closest to my nasal cavity. It’s hard to explain. I’ve noticed it gets harder to do those high screams as I get older, so hopefully I can keep it up for a while longer. Although, some people might prefer if we lost the screams, but those people are tardvisions, haha.