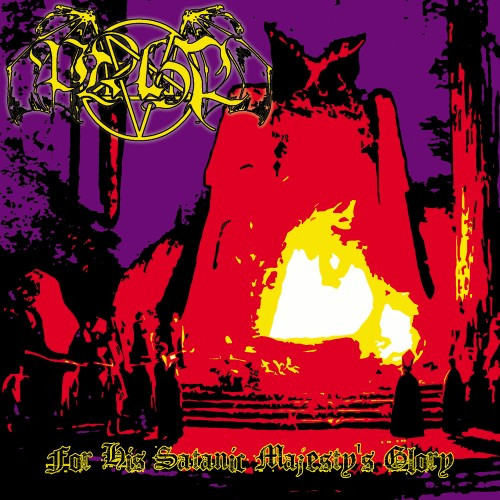 Get an eyeball-full of that album cover, would you? Purple, red, and yellow: colors that are just meant to go together, even if they don’t teach that combo at interior design school. Cloaked acolytes standing before a great, cloaked, faceless being, and a monstrous firepit blazing with white heat, and the roasting flesh of the disobedient filling the nostrils of the faithful with a sickly sweet aroma. Or maybe it’s just hot dogs. It’s hard to see into that firepit.

I missed this album when it had its North American release in November. It’s about to be discharged in Europe, on January 16, by Wraith Productions. DECIBEL magazine’s on-line site started streaming the album in full yesterday (here), which is what caught my eye, and then my ears.

Try this on for size: echoing vocals dipped in lye and then scalded in the smoking blood of a battlefield; fuzzed-out sludgy riffs and rough solo’s that hit you down in your gut and make you want to hit back; punk and rock and doom rhythms that are as catchy as a new strain of STD; ingenious production that’s somehow both sharp-edged and full of DIY distortion; and lyrics that conjure satanic rituals full of bile and venom.

That’s the sound of Ptahil on their debut album, For His Satanic Majesty’s Glory. No fucking around, no pretense, the kind of black metal that’s usually hot instead of cold, the kind that makes mean drunks want to inflict pain in the mosh pit, rock ‘n’ roll for the utterly damned, stoner metal for the corpse-paint set. 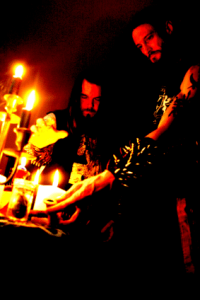 This is an album that should have given Midnight and Craft a run for their money in the sweepstakes of 2011 black-metal hook monsters, but I’ve seen little mention of it. Maybe I just haven’t been paying enough attention.

Even when Ptahil downshift into low gear on sludgy tracks like “The Black Fire” or “The Black Flag of Total Death”, they can’t stay there for long without giving free rein to the rock-out impulse. And even dissonant, ritualistic stompers like the title track or “Regards Foreman Exu” are still catchy invitations to headbang long before they inevitably start to accelerate.

The band consists of two dudes from that bastion of the satanic vanguard, Fort Wayne, Indiana. Must be a trip for these two to live in a place so thoroughly unwelcoming to what they do, but maybe that’s part of what gives their music such authentic fire. It’s like an anthem that screams, “Fuck mere survival! We will either dominate or die!”

D. Luathca (guitar, bass, vocals) and J. Mhághnuís (drums, vocals) may be deadly serious in the ritual occultism of their creative drive (sounds like there’s an actual black mass going on at the beginning and end of the long closing track), but the results are simply a shitload of evil fun. Here’s the opening track from For His Satanic Majesty’s Glory — “The Great Satan”. Get ready to rip and roll.

8 Responses to “PTAHIL: “FOR HIS SATANIC MAJESTY’S GLORY””