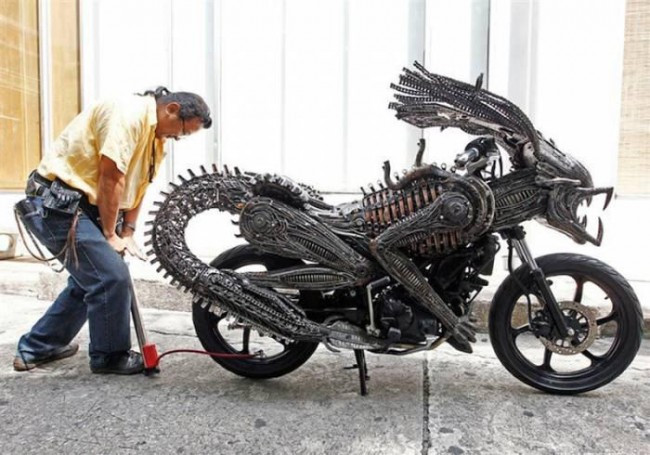 What a long time it’s been since the last post in this series — more than a month. And I’ve collected so many items to choose from — many of them from the NCS faithful. One of them I’ve been sitting on for a really long time, because it involves a massive amount of pus. I’m still not sure I can bring myself to use it, since I’m pretty sure it’s the most disgusting thing I’ve ever seen. I think I’ll just start going with this post and see how I feel when I get to the end.

The first item is right up there at the top of this post, and it came our way from my friend Quigs. I poked around the interhole to see if I could find more about this awesome piece of construction. It appears to have been created by a dude in Bangkok from recycled auto and bicycle parts. More details about it can be found here. And a couple more pics of this thing are right after the jump. 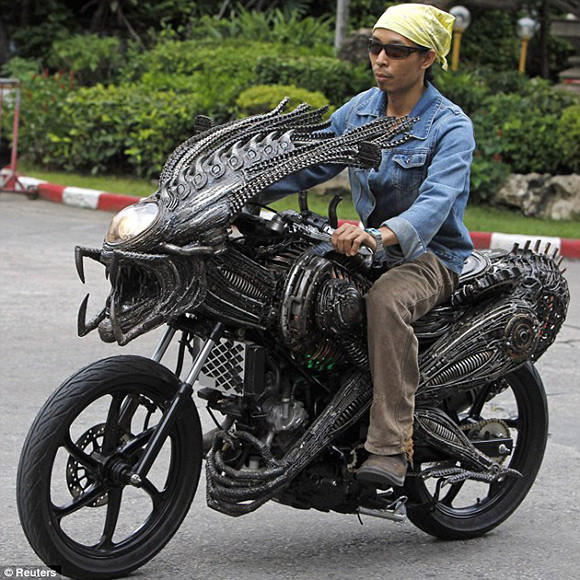 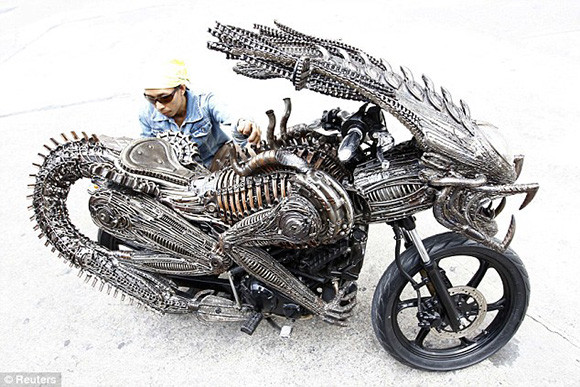 Seriously, how badass would it be to ride down the road on an Alien chopper like this? For extra coolness, I’d want the ability to hit a switch and have the xenomorph’s inner mouth shoot out of jaws like it does in the movies in order to scare the living fuck out of anyone who gets too close.

We’ve proven time and time again in this series that nature is fucking weird and often disgusting, in addition to being beautiful and amazing. This next item falls into the “weird and disgusting” kind of natural-world metalness, and was brought to our attention by NCS reader Ben C. Meet Ampulex compressa, also known as the emerald cockroach wasp or the jewel wasp: 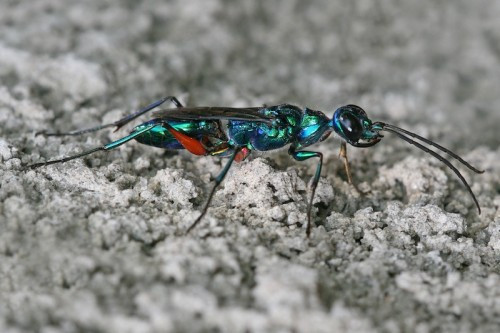 The xenomorph creature in the Aliens movies is a wicked creation, but this real-world creature has eerily similar reproductive practices. According to this article, the wasp uses roaches as hosts for its young. It slips a stinger directly into the roach’s brain and injects a venom that doesn’t kill or paralyze the roach, but disables its “escape reflex”. The wasp then directs the movement of the roach like a dog on a leash, using the roach’s antenna to lead it.

The wasp takes the roach into its burrow and lays an egg on the roach. The egg hatches, a larva emerges, and the wasp larva eats a hole into the living roach. It goes inside and grows by devouring the organs of its host for 8 days. It then emerges fully grown.

Disgusting?  Yes.  Metal?  Fuck yes, in a brutal way.  And don’t tell me you don’t want to see this happen, because I know you do.

I’m really glad this fucker didn’t evolve to reach the size of a German Shepherd, or one of those Alien xenomorphs, aren’t you?

After that piece of utter foulness, I think we need one of those “beautiful and amazing” pieces of natural-world metalness. Phro sent me this one. I was somewhat fearful that there would be an unexpected tentacle before this clip ended, but no.

This video was taken by the Russian and American crew of the International Space Station on December 29, 2011, as the station passed over Central Africa to the South Indian Ocean. The flashing lights you’ll see are lightening flashes in local storms lower in the atmosphere. Be sure to notice as the Milky Way rises from below the horizon. The pass ends as the sun rises over the ocean.

Motherfucking wondrous. To see that in HD, visit this location.

It’s exactly two weeks until Super Bowl XLVI, and I’m already getting excited. Not because I care about the game — I don’t really give a fuck about any of the four teams who are still in the playoffs. No, I’m excited because of the Super Bowl commercials!

Volkswagen has already released a teaser for their commercial. I don’t think I’ve seen a dog choir perform quite this well before. The melody sounds vaguely familiar, too. Definitely not a metal song though. It will come to me eventually.

(Credit to TYWKIWDBI for this find, and for the intro to the vid.)

So let’s see now, we haven’t yet featured anything ridiculous yet, so let’s take care of that right away. What makes this next video metal isn’t the music, (a) because THAT’S METAL! is a series about things that aren’t music, and (b) because the music in this video is fucking embarrassing. No, what makes this video metal are the subtitles. Funny. As. Shit.

(Credit to The Presurfer for this find.)

Well, that was fun, wasn’t it? For our last item, let’s stay with the utterly ridiculous — combined with the brutal. This is a montage of the Best Fails of 2011. I intended to post this around the end of last year, but I fucked up and forgot to do it. So I’m doin’ it now. Thanks to long-time reader deaths_embrace for this one.

So, that wraps up this installment of THAT’s METAL!  As always, enjoy the rest of your fucking day.

P.S. Yeah, I wimped out on the pus thing. I just couldn’t do it. Toooooo fuckin’ gross. deaths_embrace sent me the link for this motherfucker, too. If you haven’t eaten recently and you don’t plan to eat in the near future (like, before March), you could go watch this epic cyst extraction on your own and come tell us what you thought.  Or you could just forget all about this, which would be the prudent course of action. The fact that this thing has 11.7 million YouTube views means nothing, believe me. Did I mention that this was disgusting?